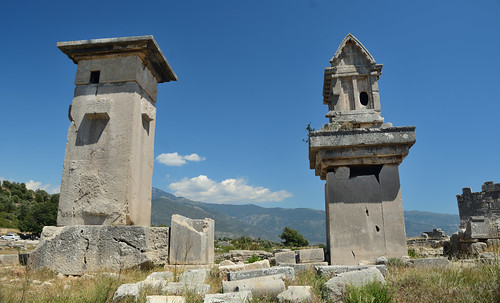 Pillar tombs at Xanthos ("Harpy Tomb" on the right).

Location
Xanthos is not far from Patara and a trip to Letoon or Xanthos from Kalkan, Kaş or Fethiye could easily be combined with a trip to the beach and/or ruins there. It is located near the village of Kınık on a hillside in a beautiful natural site overlooking the Eşen river. From this elevation one receives a supreme view of the Xanthos Valley surrounded by the spectacular Taurus Mountains. It is easy to find by car, just off the main highway and well-marked. Xanthos’ landscape is quite beautiful, especially in spring.

History;
The history of Xanthos is quite a violent – the Xanthosians twice demonstrated the fierce independence of the Lycian people when they chose to commit mass suicide rather than submit to invading forces. The Xanthosian men set fire to their women, children, slaves and treasure upon the acropolis before making their final doomed attack upon the invading Persians. Xanthos was later repopulated but the same gruesome story repeated itself in 42 BC when Brutus attacked the city during the Roman civil wars in order to recruit troops and raise money. Brutus was shocked by the Lycians’ suicide and offered his soldiers a reward for each Xanthosian saved. Only 150 citizens were rescued.
We made our houses graves
And our graves are homes to us
Our houses burned down
And our graves were looted
We climbed to the summits
We went deep into the earth
We were drenched in water
They came and got us
They burned and destroyed us
They plundered us
And we,
For the sake of our mothers,
Our women,
And for the sake of our dead,
And we,
In the name of our honor,
And our freedom,
We, the people of this land,
Who sought mass suicide
We left a fire behind us,
Never to die out…
Poem found on a tablet in the Xanthos excavations, translated by Azra Erhat