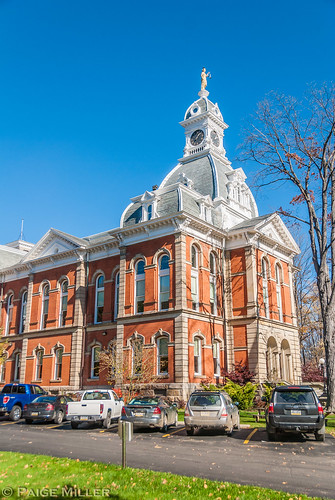 Warren County Courthouse, built 1876 in Second Empire Style. Architect M. E. Beebe from Buffalo designed the courthouse in Second Empire Style at a cost of $87,434.59. All decorative trimmings, including pilasters and the main entrance archways with side pillars, were of Ohio Stone. The courtrooms and chambers were planned for the second and third floors. Georgia pine was used for the office and courtroom floors, while marble tiles made up the hall floors. Walnut woodwork is found on the first floor and pine is on the second floor. Equipped with a clock made-to-order in New York and 1600 pound bell from Cincinnati, the courthouse tower also feature a statue of Justice raised in 1877, 125 feet from the ground. However, recent renovations have placed the original statue in the main entryway, while a fiberglass replica stands atop the structure.