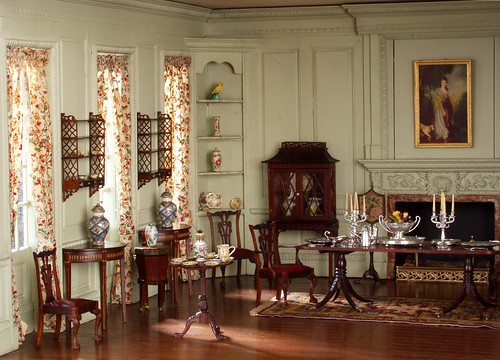 All the furniture in this room was copied from 18th century Thomas Chippendale furniture in British museums. Chippendale, England’s most celebrated cabinet and furniture maker developed a style called chinoiserie based on imported Chinese luxury goods. Those goods included porcelain, silk, lacquered cabinets, and hand painted wallpapers entering England on British trading ships. Straight legs, pagoda tops, and fretwork trim as seen in the curio cabinet and hanging shelves characterized this style. During this period of intense trade with China, tea drinking became popular in England. Indian tea had been in England since the 17th century, but the importation of Chinese teacups and saucers popularized the art of tea in England.