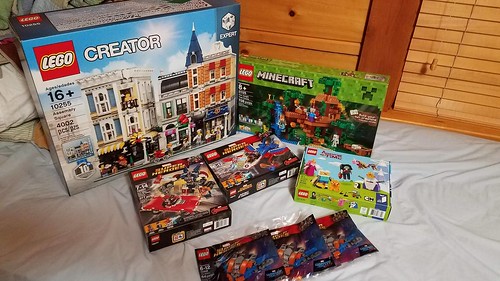 So, I had some time to run down to the Lego store after my exams yesterday. Might have gone a tiny bit overboard… To be fair though, I was going to by the assembly square as a congratulations to myself for getting an -A in the online calculus cop-out class I took over the winter. It was difficult, but super fun, and I’m honestly considering emailing that prof to ask if he has more problems for me to work through. It was a formal logic class and was basically logical proofs, but it used weird symbols that I can’t find in other problems online and they were really fun…

Anyway, I was going to buy the new chess set since its about $0.032/piece USD, but I found this minecraft set at walmart on sale for $50 and it comes with an ocelot. Ocelot beats chess.

And back to the title of the picture, It is still finals week. I’ve got an essay due tomorrow at noon that is *checking* a bit BS’y, but is going to be a page or 2 longer than the minimum. Then also an administrative law exam on friday morning. As long as I get a 75% on the exam, I’ll be able to get my grade up to a B, but this is by far this class has by far the most difficult exams I’ve ever taken. As long as I get a 65%, I’ll be able to end it with a C. Not what I’d want, but its been a busy semester.

I won’t be able to actually open these sets until Monday, which is kind of a bummer for me because it is super difficult NOT to open them right now. Who am I kidding, it was difficult not to open them last night! But since Friday I’m brining my mom’s mother’s day gifts to her school as a surprise (I found a Miami Gnome at an antique store just off campus, and it belonged to one of the school’s presidents!), then Saturday I’m helping one of my best friends move back home (</3), and then sunday is mother’s day…it’ll be a long wait, but definetly worth the wait.

In other news, I should be getting a new tiny shed for woodworking and storage for my boat, so woodworking pics hopefully soon, and some buddies from school and I are going to start a minecraft server so we can still hangout. So there might be a few pictures from there. I’m thinking that I might have use for some of that walnut that’s left over from Kelsey’s b-day gift…