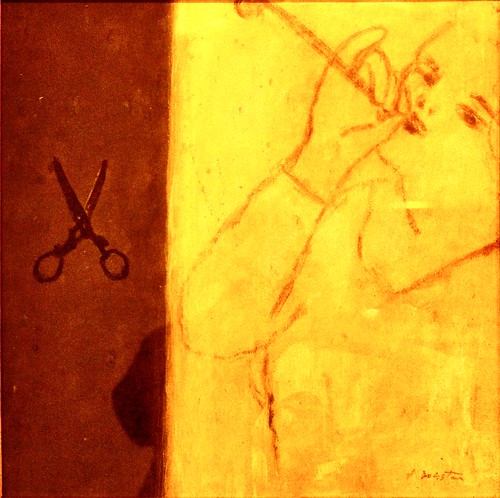 António Dacosta was born in the Azores on Terceira Island on 3 November 1914. He came from a family of craftsmen accustomed to hard, skilful work with their hands: his father was a woodworker and taught this craft at Angra’s Commercial and Industrial School, and his grandfather was a woodcarver who worked at various churches on the island. While still in his teenage years, he started to paint local landscapes in oil, demonstrating an artistic ability that led him to leave the islands in 1935 and settle in Lisbon, where he attended the School of Fine Arts. He attended the school until 1941 but never graduated.

A face in a painting from 1936/37, O Passarinheiro [The Fowler], is one of the earliest signs of his creative unrest, which would intensify as the years passed by and encounters took place, with special emphasis on his friendship and collaboration from 1938 with António Pedro (1909-1966), an older partner in modernist and surrealist adventures. In fact, the show they put on with sculptor Pamela Boden (1905-1981) in 1940, at Casa Repe, is considered the first surrealist exhibition in Portugal; in stark contrast to the Exhibition of the Portuguese World and the official centennial celebrations which happened the same year.

In the beginning of the 40s, the uncertainty brought by wars surrounding his country, first the Spanish Civil War, and then right after WWII, translated into paintings, drawings and illustrations in which surrealism reflects the unrest, the “Antithesis to Portuguese Calmness,” where the conscious and unconscious go hand in hand. It is also in the first half of the 40s that Dacosta unveiled another facet of his work: art criticism and chronicles that would last until 1980.

He went to Paris in 1947, thanks to a scholarship from the French government, and would stay in this city until the end of his life, enjoying “the exultant ability to admire” that distinguishes it. Paris must be experienced, even if that makes one’s painting falter for decades; and that is what happened to him, not only because experiencing life became an imperative, but also because of an acute, conscious realization of a crisis in his art, which brought him to ask, as early as 1948, “Is the creative rhythm over?”

Despite progressively giving up painting in the late 40s, which lasted for approximately 25 years, he did not lose interest in the arts, enjoying the intense observation of his surroundings more than the obligation of writing chronicles and sending them to the newspaper O Estado de S. Paulo. To paint and draw continued to be a residual practice in his relationship with friends and relatives; but for critics and the history of Portugal, Dacosta remained an absent figure, who “maybe has been lost to painting” (J.-A. França, 1965).

His long absence would only bring more attention to his public reappearance in a 1983 exhibition (Galeria 111, Lisbon). His gradual, private and intimate return to painting had begun earlier, in the 1970s, probably with the aid of “that which children know and adults need to learn”: the presence of Carlos and Lisa, born in 1969 and 1972, his children with Miriam Rewald, whom he married in 1967.

Dacosta reappeared with a new painting style and crystal clear vision of the simplest things, which he organized in either thematic series or magnificent singularities, and would affirm himself during a decade of critical acclaim (AICA Prize for the Arts, 1984; retrospective at the Calouste Gulbenkian Foundation in 1988) and official acclaim (Grã-Cruz da Ordem de Mérito, 1990). This decade, the last one of his life, was marked by an intense artistic production, which was also literary (A Cal dos Muros, a book of poetry, was published by Assírio & Alvim in 1994) and constantly evolving into a renewed gravity marked by a sense of fleeting time and the ephemeral nature of life and art, where a final and serene unrest meets the initial turmoil of the surrealist young man of the 40s. CAM is preparing a centennial exhibition and edition of a catalogue raisonné with his works for 2014.