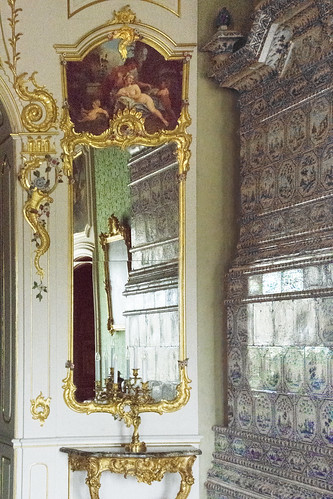 What you’re seeing here is part of the recreation of the interior of the Rundāle Palace, Latvia.. The restoration cost over 8 million Euros, which, when you see the results, doesn’t seem nearly enough to produce the splendors one encounters at every turn.

What’s not clear to me is whether any of decoration is original and restored and how much is brand new. This always frustrates me because I’m hung up on the concept of authenticity. I’ll just come right out and say I don’t get the same satisfaction from replicas that I do from originals.

One way to resolve this conundrum is to say this is an authentic replica of an 18th century palace that was, as the text below explains, "demolished in 1812 during the Franco-Russian [Napoleonic] War," and then "demolished [again in 1919] by the men of the Bermondt-Avalov army," which was commanded by a Cossack warlord who decided to take over newly-independent Latvia instead of fighting the Bolsheviks.

Still, this begs the question of the meaning of such a place. A hot take is that it’s an expression of Latvian nationalism. However, in the 18th century this region was ruled by Germans and then by Russians. Most ethnic Latvians were serfs. Perhaps the nationalist message is that the Latvians, once free from the rule of Baltic Germans, Czarist Russians, Nazis and the Soviets, had the wherewithal to recreate a palace once owned by an overlord and make it their own. To further make the point, the compound is now a major tourist attraction, so interiors once intended solely for the aristocracy, royalty and their hangers-on and servants are today filled to the brim with tourists like us.

Is is also a acknowledged center for the study of 18th-century interior design? The devil is in the details, and I haven’t yet had time to delve into that.

If you’re wondering why the point of view in these photos is from the top of the windows to the ceiling, it’s because there were mobs of visitors that made it almost impossible to photograph whole walls, much less floors.

Here is the whole history of the construction of the palace from the palace’s informative Web site. I recommend visiting it if for no other reason than to see the rooms devoid of visitors. Also, there’s a section on the restoration.
rundale.net/en/

The name of Rundāle comes from the German place-name Ruhenthal (Valley of Peace).

The Rundāle Palace built during the 16th century was located on the northern side of the pond. It can be seen in the design of F. B. Rastrelli as a small square field with towers in the corners.

Rundāle Manor was already created at the end of the 15th century. It belonged to the Grotthus family from 1505 to 1681 and the palace was mentioned in the list of Livonian castles in 1555.

Facade finishing components have been found in the territory of the palace – cast fragments and fragments of coats of arms carved in stone dating to the middle of the 17th century. In 1735 Ernst Johann von Biron bought the Rundāle property for 42 000 thalers.

The old palace was completely torn down, and the stones, bricks and even the mortar were used in the construction of the new palace.

Duke Ernst Johann died in 1772, and the palace was inherited by his widow Duchess Benigna Gottlieb; during her time orchards were formed around the palace. Duke Peter did not come to Rundāle often, he mostly resided in the smaller Vircava Palace near Jelgava.

In 1795 Duke Peter gave up his throne and the Duchy of Courland and Semigallia was added to the Russian Empire. Catherine II gave Rundāle Manor as a present to Count Valerian Zubov who died in 1804.

During the distribution of inheritance Rundāle became the property of his brother Prince Platon Zubov, the last favourite of Catherine II.

During the time of Zubov the palace was refurnished, however the building itself remained untouched, only entrance porticos were added to the central building and several fireplaces were built inside.

The palace was demolished in 1812 during the Franco-Russian War – mirrors were smashed, silk wallpaper was torn down, the library given as a present from Catherine II was destroyed.

Prince Platon Zubov died in Rundāle Palace on 7 April 1822. His widow married Count Andrey Shuvalov, and Rundāle Manor belonged to this family until the agrarian reform of the Republic of Latvia in 1920.

The Shuvalovs rarely stayed in the palace, excluding the time period from 1864 to 1866 when Count Pyotr Shuvalov was the governor-general of the Baltic region and used Rundāle Palace as his official summer residence.

During the time from 1915 to 1918 a German army commandant’s office and an infirmary was established in the palace. In 1919 the palace was demolished by the men of the Bermondt-Avalov army.

The palace was renovated in 1923 and some of its rooms were used as the primary school of Rundāle Parish. In 1924 Rundāle Palace was handed over to the Latvian Union of Disabled Veterans, but in 1933 it was taken over by the Board of Monuments which started the renovation of the building and the restoration of some of the rooms, and the western building was constructed for the needs of the primary school.

In 1938 the palace was handed over to the State Historical Museum that was planning to create a church art and decorative art museum there. The palace was also open to the public during World War II.

In 1945 a grain storage was formed in the halls of the palace, and the palace was closed to the public after that.

In 1963 some of the palace’s rooms were given to the Museum of Regional Studies and Art of Bauska, but in 1972 a permanent Rundāle Palace Museum was created and its main aim was to renew the whole ensemble of the palace by mainly orientating towards the condition of the palace during the second part of the 18th century.

The first restored rooms in the eastern building of the palace were opened to the public in 1981, gradually being followed by new interiors. Restoration of the palace was finished in 2014.

The construction project was ready in January of 1736. The eight pages of the project are located in the graphic art collection “Albertina” in Vienna. It consists of a situation plan, two floor plans, a sketch of four facades and the altar of the palace church.

On 24 May 1736 the foundation-stone of the palace was set. Construction of the foundation was completed on 6 July, whereas on 13 October the central building was built to the level of the windowsill of the second floor. The construction of 12 brick-kilns and 12 brick storages was finished in June. 268 masons were working in the palace, but Rastrelli requested 500 men.

When the works were stopped on 10 October, one side building was roofed over, and the other one was covered with a temporary roof. The foundations of the stables were also ready. The bricklaying works were finished on 1 October 1737.

After Biron was elected Duke, he ordered to simplify the building. The finishing materials were produced by the master carpenters and woodcarver A. Kamaev of the Imperial Construction Bureau of Saint Petersburg, master potter I. Ushakov of the Neva brick factory with his team and painters I. Mizinov, I. Pilugin and I. Yevdokimov. Austrian potters were working in Vircava. The finishing materials were also being produced in Saint Petersburg.

In 1738 the volume of work in Rundāle decreased, as construction works of Jelgava Palace began. Some of the produced components were also taken to Jelgava. However, the works were moving forward – chimneys and room arches were being built, roofs were being finished.

In 1739 the interior plastering works were supposed to be carried out, but the Duke ordered to decrease the amount of plasterers and to simplify the work. Stucco formations were made only for the main staircase rooms and halls, the other rooms were left with smooth ceilings. Only ten craftsmen were working in Rundāle.

On 1 February after the order of Empress of Russia Anna Ioannovna all of the Saint Petersburg Construction Office masons were sent to Courland.

The components made for Rundāle, including carved doors, panels, parquet, Austrian potter stoves, plafonds painted on canvas and cast-iron facade decorations made by Bartolomeo Tarsia that can be seen in the Jelagava Palace facade, were transported to the main residence in Jelgava.

N. Vasilyev assisted Rastrelli in managing the construction works. Russian chamberlain Ernst Johann von Buttlar was in charge of finances and organisation and he was sending reports to Saint Petersburg regarding the work process.

In 1740 the woodcut altar of the palace church was transported to Jelgava. Supposedly the room decoration in the palace had been finished, but not all of the wall panels had been mounted and some of the stoves were also not set up, as a lot of the materials were in storage.

Work was stopped after the palace revolution of 20 November in Russia and the arrest and exile of Duke Ernst Johann. The prepared finishing materials and construction components were sent to Saint Petersburg, and some of the built-in components, such as doors, wall panels and parquet, were broken.
Overall more than a thousand different profession craftsmen and workers were employed in the construction works of the palace.

During this time he arranged his construction designs and carried out general supervision of the Duke’s construction works.
The unfinished gate tower was torn down and the stable building construction was started. Latvian carpenters and woodworkers were sent from the Duke’s domain manors to Rundāle up until 1768. In 1765 woodworker Blanks, sculptor Zībenbrods, locksmith Šreibfogels, gold plating master Johans Endress, potter Šēfers, locksmith Horstmanis and coppersmith Mēmels were working in the palace.

In 1766 Severin Jensen from Denmark started working as the court architect. His style can be seen in the gateposts and in the stable buildings, which obtained a semicircular shape in contrast to Rastrelli’s rectangular design. A dating – 16 May 1766 – has been made in the keystone of the northern facade window.

In 1768 the gate was built and the forgings were placed.

The palace interior planning was changed slightly. By merging five smaller rooms the grand dining-room – the Grand Gallery – was created, whereas a dance hall known as the White Hall was created in the place of the palace church. Both front staircases, the Small Gallery, the lobby and galleries of the first floor were preserved from the original interiors of the first construction period.

The stucco decorative finishing of the interiors was carried out by the Berlin sculptor and stucco marble master Johann Michael Graff together with his team – his brother Josef and assistants Bauman and Lanz – from 1765 to 1768.

Sculpturesque decorations were made in twenty-seven rooms, but in two rooms of the Duke’s apartments and in the hall – synthetic marble panels. Works were started in the central building first.

The Marble Hall and the marble panel of the Gold Hall in which the dating has been engraved on the door lining, were finished in 1767. In July of 1768 Graff received payment for his final works – the White Hall, Oval Cabinet, Duchess’ Boudoir and vases for the 22 stair banisters.

The ceilings were painted by the Italian painters Francesco Martini and Carlo Zucchi from Saint Petersburg. They started working in August of 1766, but only the name of Martini is mentioned in documents starting with March of 1768. Francesco Martini received his last payment in March of 1769.

Ceilings of eight rooms, as well as the walls of two rooms were painted. One of the ceiling paintings got destroyed. The repainted wall paintings were later uncovered in the Grand Gallery and in the second study of the Duke.

The Duke came to Rundāle Palace in April of 1767 and stayed there until December with interruptions, although the finishing works were still in progress. The palace was also inhabited in 1768. The final works were carried out in 1770 when a fellow of J. M. Graff placed mirrors in the White Hall.