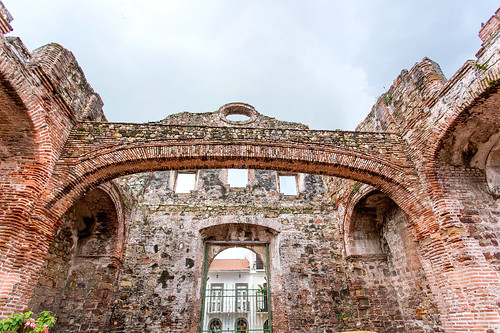 Arco Chato The Dominican friars began to build their church and convent in new Panama immediately after the founding of the city. In Old Panama they had a substantial building of stone, and some of this entered into the edifice in the new city. In the fire of 1756 all the woodwork was burned and the church was not rebuilt. It is a typical piece of the architecture of the period, the façade still showing where the towers rose, and the little statue of Saint Dominic still standing above the board front entrance. The church is situated on the corner of Avenue A and 3rd Street. It is built of rubble masonry, with dimension stone in the façade, and was erected by the lay brothers of the order. It is 75 feet wide and 120 feet long. The nave is 70 feet deep. Instead of having side naves the church has three arches or vaults for shrines on each side, and one arch on each side for entrances, that on the street side for the people and on the side opposite as a means of entrance from the old monastery. The apse is 50 feet deep and is formed by three grand arches (one was shattered in the earthquake of 1882) and two side arches. Near the main entrance, forming on of the supports for the choir is a brink arch, spanning a space of 50 feet, 35 feet high at the crown and 25 feet at the spring. So flat an arch is said to be an engineering “sport,” and is pointed out as one of the sights of the city. The Panama Guide by John O. Collins 1912