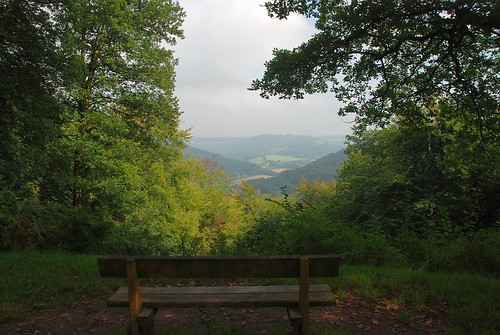 The Wye Valley Area of Outstanding Natural Beauty (AONB; Welsh: Dyffryn Gwy) is an internationally important protected landscape straddling the border between England and Wales. It is one of the most dramatic and scenic landscape areas in southern Britain.

The River Wye (Welsh: Afon Gwy) is the fifth-longest river in the United Kingdom. The upper part of the river passes through the settlements of Rhayader, Builth Wells and Hay-on-Wye, but the area designated as an AONB covers 326 square kilometres (126 sq mi) surrounding a 72-kilometre (45 mi) stretch lower down the river, from just south of the city of Hereford to Chepstow.

This area covers parts of the counties of Gloucestershire, Herefordshire and Monmouthshire, and is recognised in particular for its limestone gorge scenery and dense native woodlands, as well as its wildlife, archaeological and industrial remains. It is also historically important as one of the birthplaces of the modern tourism industry. The area is predominantly rural, and many people make a living from tourism, agriculture or forestry. Ross-on-Wye is the only town within the AONB itself, but Hereford, Monmouth, Coleford and Chepstow lie just outside its boundaries.

The varied landscapes of the Wye Valley can be explained by underlying rocks and structures, and how ice and then the river and tributary streams have acted upon them through time.

Close to Hereford, the geology of the area around the village of Woolhope is largely made up of Silurian limestones, shales and sandstones. To the south of this, the Herefordshire lowlands are largely underlain by red mudstones and sandstones, producing a redder soil. These rocks are softer than the limestones elsewhere, so the river created more meanders, a wider floodplain, and a gentler and more rolling landscape. Around Symonds Yat, limestones and red sandstones meet. This leads to a landscape of hills and plains, as well as substantial meanders which have formed impressive river cliffs.

The Lower Wye landscape was formed by the river acting on a series of layers of rock that dip towards the Forest of Dean. Here the river has incised into the margins of the Old Red Sandstone plateau to form a gorge with substantial river cliffs. The steepest parts of the Wye gorge are cut through the Carboniferous Limestone. Here the combined action of the river, natural joints in the rocks and quarrying have exposed many vertical faces, particularly between Tintern and Chepstow.

Geological interest extends underground, and there are many rock shelters and solution caves in the area. These include King Arthur’s Cave and many others in the area of Symonds Yat and Slaughter Stream Cave near Berry Hill. At St Arvans, near Chepstow, the underground watercourses have carved out long cave systems, which exit at Otter Hole at the base of Piercefield cliffs – the only cave system in England or Wales which can only be reached through a tidal sump, making it a mecca for experienced cavers.

Lancaut and Ban-y-Gor are Gloucestershire Wildlife Trust nature reserves. They both have SSSI status being part of the nationally important Lower Wye Gorge SSSI and within the Wye Valley AONB. The Wye Valley is important for its rich wildlife habitats.

The area has three sites of international importance, designated as Special Areas of Conservation (SACs) under the European Union’s Habitats Directive. These are the River Wye (Afon Gwy), the Wye Valley and Forest of Dean Bat Sites (Safleoedd Ystlumod Dyffryn Gwy a Fforest y Ddena) and the Wye Valley Woodlands (Coetiroedd Dyffryn Gwy). It supports a population of lesser horseshoe bats, a growing population of peregrine falcons, goshawks, ravens, rare whitebeam, nightjar and lesser known fish like the shad and twaite. The main Welsh populations of the small but colourful moth Oecophora bractella are found here.

In September 2006 it was reported that one colony of lesser horseshoe bats in the area had reached record numbers, with some 890 bats in a small stone barn (599 adults and 291 babies recorded).

The valley has been inhabited for at least 12,000 years. Caves near Symonds Yat and Chepstow provide evidence of settlement dating from Palaeolithic times, and finds from later stone ages such as the Neolithic have also been found. These have yielded evidence of how prehistoric human populations lived as nomadic hunters and traders.

Standing stones at Huntsham, Staunton, and Trellech all have origins dating back to the Bronze Age. Later, Iron Age forts along the lower Wye Valley, and in the Woolhope area, took advantage of the natural hilltops and promontories to form well-defended settlements. It is likely that many of these marked the edges of disputed tribal pre-Roman territories.

Watling Street ran through the Roman settlements of Ariconium (just north of modern Ross-on-Wye) and Blestium (Monmouth), and a number of other small Roman settlements are known. The first evidence of the exploitation of iron and coal in the valley is found in the Roman period, with iron working known from sites at Monmouth, Trellech and elsewhere, as well as in the adjoining Forest of Dean. The medieval boroughs of Goodrich and Chepstow, at each end of the Wye Gorge, may have originally been established at this time.

Closely following the River Wye, Offa’s Dyke was built in the 8th century under King Offa to mark out the boundary between England and Wales and is, today, the longest archaeological monument in Britain. Offa’s Dyke Path long distance footpath today traces the route through the Wye valley on the English bank, while the Wye Valley Walk follows the Welsh bank.

When the Normans conquered the region in the 11th century they immediately built major castles at Chepstow and Monmouth to defend the territory. Smaller castles were built at St Briavels, Ruardean, Goodrich and Wilton Castle.

Tintern Abbey was founded in 1131 by Cistercian monks, and largely rebuilt in the 13th century. It is the best-preserved medieval abbey in Wales and an outstanding example of Gothic architecture.

Many of the smaller villages in the area probably date from the Middle Ages, and much of this expansion was probably associated with the early iron industry. The medieval iron industry consumed large quantities of charcoal and much of the woodland was coppiced for this purpose. Trellech was one of the largest communities in Wales during this period.

Iron has been made in the Wye Valley since Roman times, using the ready supply of timber, good quality ore and abundant charcoal from the Forest of Dean. The river provided transport for the raw materials and finished product, and with the introduction of the blast furnace in the 16th century, its tributaries began to be used for water power.

The first brass made in Britain was founded at Tintern in 1566. Wire-making followed, with water mills situated on all the tributaries of the lower Wye. The area resounded to the noise and smoke of heavy industry for the next 400 years and gave rise to many pioneering industries. For instance, Whitebrook became famous for paper milling, when wallpaper became a fashionable way to decorate houses. At Redbrook, copper works were established by 1691, and a century later the village became one of the world’s major tinplate manufacturing centres. This industry survived until the 1960s and was renowned for producing the thinnest, highest quality plate in the world. The Lydbrook valley was also a thriving centre for metal industries, such as the manufacture of telegraph cables.

The valley woodlands were carefully managed to produce mature trees for shipbuilding, or by coppicing for charcoal, and to provide bark for tanning. The valley industries were also massive consumers of timber. A ship of 150 tons, for example, required 3,000 wagonloads of timber to complete – and in 1824, 13 ships were launched at Brockweir alone.

The river was the economic backbone of the region, providing an important means of transport, trade and communication. In late medieval times, salmon weirs hindered free passage on the river, but the Wye Navigation Act in 1662 enabled the river’s potential to be developed. By 1727 shallow draught boats could get upstream beyond Hereford, and a significant shipbuilding industry developed at Monmouth, Llandogo, Brockweir and Chepstow. However, by 1835 it was stated that the Wye "can scarcely be considered a commercial highway" above Monmouth, and by the 1880s Brockweir bridge was the effective upper limit of navigation.

As the 19th century progressed, the valley’s industries gradually declined, and management of the woodlands lessened when there was no longer a ready market for their products.

The Forest of Dean is a geographical, historical and cultural region in the western part of the county of Gloucestershire, England. It forms a roughly triangular plateau bounded by the River Wye to the west and north-west, Herefordshire to the north, the River Severn to the south, and the City of Gloucester to the east.

The area is characterised by more than 110 square kilometres (42.5 sq mi) of mixed woodland, one of the surviving ancient woodlands in England. A large area was reserved for royal hunting before 1066, and remained as the second largest crown forest in England, the largest being New Forest. Although the name is used loosely to refer to the part of Gloucestershire between the Severn and Wye, the Forest of Dean proper has covered a much smaller area since medieval times. In 1327 it was defined to cover only the royal demesne and parts of parishes within the hundred of St Briavels, and after 1668 comprised the royal demesne only. The Forest proper is within the civil parishes of West Dean, Lydbrook, Cinderford, Ruspidge, and Drybrook, together with a strip of land in the parish of English Bicknor.

Traditionally the main sources of work have been forestry – including charcoal production – iron working and coal mining. Archaeological studies have dated the earliest use of coal to Roman times for domestic heating and industrial processes such as the preparation of iron ore.

The area gives its name to the local government district, Forest of Dean, and a parliamentary constituency, both of which cover wider areas than the historic Forest. The administrative centre of the local authority is Coleford, one of the main towns in the historic Forest area, together with Cinderford and Lydney.