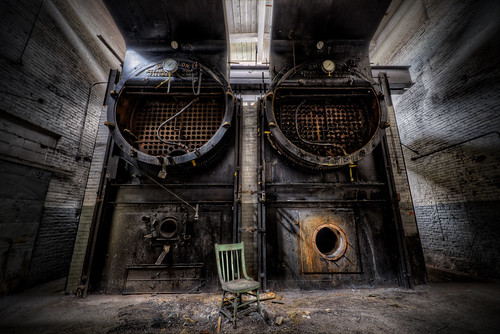 These are steam boilers made by D.M. Dillon Steam Boiler Works in Fitchburg, Massachusetts.

This mill is massive and very alarmed. I was invited to photograph the interior as it stands today. There is no current plan for the use for this building or 54 acres of land.

Some history on the town that is also known as "Toy Town":

"Winchendon Becomes a Manufacturing Community
In the first half of the nineteenth century, the small Monomonac Lake was dammed raising the water level by maybe 15 feet and increasing the water area to more than 500 acres, the larger portion lying in New Hampshire. Other reservoirs were built on the east branch of the Millers as well. These reservoirs could be drawn down in dry seasons making water power much more dependable at the many mill sites down the river. With the available water power, working in the mills became the principal occupation of many and the town grew.

Manufacturing became an important factor in the local economy. The woolen mill in Winchendon Springs was acquired by the Nelson White family and became a cotton mill It was substantially enlarged and additional factories built in Glenallan and the Winchendon village. Factory sites were developed away from the river powered by steam generated from, almost certainly, wood waste and low quality wood.

Local men invented a number of woodworking and other machines and these were built here generating a metal working industry as well. Men in the Whitney and Murdock families invented machinery for making tubs and pails more easily and these products became important Winchendon products. Baxter Whitney invented the first successful wood thickness planer. His factory was near the middle of Winchendon and the dam and pond behind it still bear his name. The planer won prizes at international exhibitions and was marketed throughout the world until the 1950s. Morton Converse made wooden collar boxes (for the men’s collars popular at the time) and then switched to wooden toys. This was very successful and Winchendon ultimately had the largest toy factory in the world. The town became known as Toy Town and the name has stuck. The business, however, succumbed to metal by the 1930s. Plastic toys have now largely replaced metal and those are still manufactured in Winchendon by one firm.

In 1847 the railroad came to Winchendon and the ability to move goods in and out of the town more easily and cheaply further spurred the growth of manufacturing. The first railroad was the Cheshire which connected to Boston at Fitchburg and ran through Winchendon and Keene to Bellows Falls in Vermont. Some trains later ran through to Montreal. Later the Monadnock Railroad was built which ran from Worcester through Gardner, Winchendon, Jaffrey, and Peterborough to Concord, NH. These both later became part of the Boston & Maine system. A third railroad, the Ware River, was built from Palmer, where it connected to the Boston & Albany, through Ware, Barre, and Templeton terminating in Winchendon. It ultimately became part of the New York Central System. These made Winchendon a considerable hub in the latter part of the nineteenth century and the first part of the twentieth. With the growth of highway transportation, rail service to Winchendon ended in the 1970s and the tracks have mostly been torn up. There was also a street car line from Gardner to Winchendon by way of Baldwinville, Lake Dennison and Waterville in the first part of the twentieth century. The last of the tracks were torn up during World War II.

Transportation and trade were important along with manufacturing in the nineteenth century. Of particular note was Ephraim Murdock, Jr. He was involved with all and became very wealthy. At one point he was president of the Cheshire Railroad. His wealth ultimately benefited the town through his church and his endowment of the Murdock high school.

The Decline of Manufacturing
As electric power largely replaced small water power for manufacturing, metal and later plastic items replaced wood, and good local timber was used up, local manufacturing declined to a very low level in the middle of the twentieth century. One factory, which makes plastic toys, is the only one of any size in the town. There are, however, a number of small operations, many engaged in wood furniture manufacturing.

Agriculture, once an important part of Winchendon’s economy started to decline in the 1830s as better and more fertile land opened in the West. The decline has been gradual and now there are only two commercial farms in the town, though there are some "hobby" farms. Much of the land that was once cleared has grown back to woods or is being developed for homes."