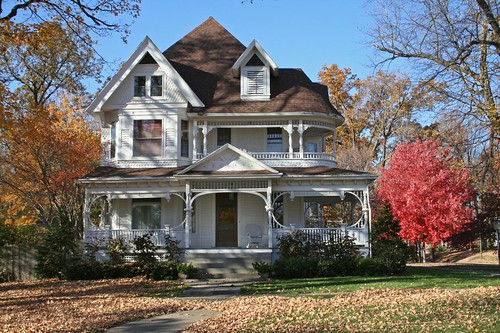 Another George Barber design, #37 from the "Modern Dwellings" catalog. Thanks to drmitch57 for the ID!!

My mom who lives in Mt Carmel said this house was recently featured on a home tour. They provide the following info:

"
· Attorney John Rhine has owned the house since 1981 and he bought it from Dr. Allen Cato. Dr. Cato purchased the house from the estate of T. W. (Top) George. Rose and Bill King were the previous owners who purchased from Wirth, purchased from J. G. Stansfield and family.

· Built by J. G. Stansfield, construction finished in 1891. The architect was George Barber (from Knoxville, TN) and is a Queen Anne Victorian style. Barber was quite famous for his Victorian house designs. There are 2 other houses in the U.S. built from the same plan, one in Atteboro, MA and one in St. John, WA. The original cost would have been around $6,000.

· There are 3 sets of pocket doors which are all perfectly functioning and 2 crystal chandeliers, one in the foyer and one in the parlor which is said to be from France according to Stansfield family members.

· The flooring on the first floor is all original and all the woodwork is original including the exterior doors. Much of the woodwork is quarter sawn oak which was purchased in Germany. Mr. Stansfield often went on buying trips in Europe for goods for his department store at the corner of 4th and Market and purchased his lumber there. Workmen at the house always comment on the fine craftsmanship of the home. The flooring on the 2nd story has been replaced with new hardwood.

· There are 4 leaded glass windows in the house and the front entry door has beveled glass which is original. The family room has an Italian marble fireplace. A photo of John’s ancestor, Charles Rhine, in his civil war uniform hangs over the fireplace. A den is entered from the family room.

· T. W. (Top) George bought the house in 1961 and remodeled it. When built there were no bathrooms indoors and the first bathroom was added downstairs just off the kitchen in a room which was formerly the pantry. A set of before and after photos was taken by the George family and they were part of the estate papers of Mr. George which were in the possession of the estate attorney, George W. Woodcock and were given to John Rhine.

· On top of the buffet in the dining room is a binder of information about the house, including photos from 1961 before and after remodeling, floor plans for this house and an article about Barber houses, including this one and the 2 others in the U.S. The painting on the west wall of the dining room is of the back yard of the U. S. Embassy in Moscow where John spent some time. The living room contains an antique oriental rug purchased from the estate of Lou Connett. The painting over the sofa is by Yvonne Mira, a South American painter, whose subjects are always faceless.

· The front foyer opens onto a front porch. The foyer is designed to hold a piano. Oak fretwork graces the oak stairway. The hallway coat closet has a bullet switch to turn on the light fixture which was added by T. W. George who was very far sighted in his remodeling of the house, using only the best of materials but still not changing the original fine flooring and woodwork.

· At the top of the stairs is the library used as an office by John. The bookcase seems to be original with changes only in the doors. The door at the end of the hall opens onto a wonderful porch which is very private.

· Across the hall from the library is the guest bedroom with an antique walnut empire bed with a fine construction and it is a family piece. Some of the other furnishings are antique family pieces, purchased antiques and reproductions in keeping with the time period. This room was originally used as an upstairs sitting room by the Stansfield’s with a doorway to the master bedroom which was next in the hallway. This next room will be remodeled into two bathrooms soon, each with an entry from the adjoining room.

· The current master bedroom is across the hall and has its own bath. Notice that the closet doors are papered the same as the walls in the room.

· The basement has a bar, area used for card parties and a home theatre complete with modern theatre seating; surround sound and leather recliners in the first row. The basement also includes a bathroom which includes a dog bath (built by T. W. George). The original tile in this bathroom has been replaced with marble. The basement remodel in 1961 added a complete second kitchen. At that time there was a maid on the 2nd floor who lived in and a yard man/handy man that lived in the basement.

· The original exterior paint color was gray and T. W. George had the house painted gray with white trim. The house was painted white at some time in the past and remains white today.

· The third floor has a bar, large cedar lined closet and open area used as a game room. At one time the pool table on this floor was owned by Corky Mortland, T. W. George’s step-son. It was so large it had to be put into the house by removing a portion of exterior wall and moved by crane.

· The second floor servant’s quarters were remodeled in 1961 placing 2 bathrooms and storage in one of the bedrooms.
· Outdoors to the west, the gazebo houses the original well for the house. The garage is on the original location of a carriage house built by J. G. Stansfield.

· Mr. Stansfield was the uncle of Dr. T. R. Young. Dr. Young (born 1911) was paid 5¢ to move a goat each day which was staked out in the yard to cut the grass. This was his first job. He was afraid of the goat at first but did the job so he could spend his nickel on ice cream or candy uptown."