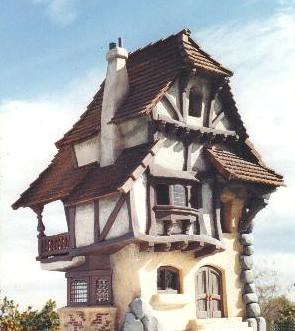 1/2" Scale miniature, shot up on a hill against natural sky & distant landscape. White bounceboard for shadow fill, no flash. Almost 2′ tall, wood construction, cast resin details, and polyester resin for stucco like textures. This was a piece for a private collector.

These scale models are also ideal for G-scale garden railroads, part of a European Village. 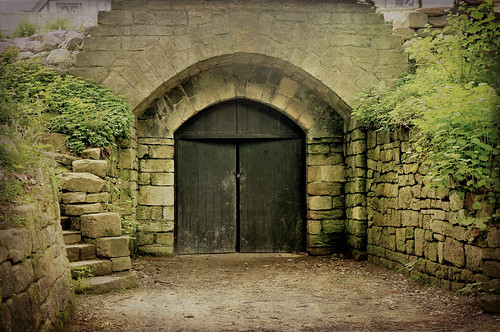 The Manor House is one of the finest examples of Tudor Revival architecture in America. The Seiberlings chose architect Charles S. Schneider to design the home for $150,000. Schneider and the Seiberlings travelled to England and visited well-known homes including Ockwell’s Manor in Berkshire, Compton Wynyates in Warwickshire and Haddon Hall in Derbyshire, influencing the design of Stan Hywet.

An enormous amount of detail went into building the Manor House, including 3,000 separate blueprints and architectural drawings for its design. The groundbreaking took place in early 1912. To facilitate the delivery of massive quantities of building supplies, a railroad spur was created for transport onto the property.

The Seiberlings also hired Boston landscape architect Warren H. Manning and New York interior decorator Hugo F. Huber. For the interior of the house, many furnishings and pieces of art were purchased by Huber in New York, with additional pieces purchased by Huber and the Seiberlings on a trip to England in 1915. Manning sought inspiration from the natural topography, with the idea and goal that the landscape and house should complement each other. In addition, Manning and Schneider worked together to ensure that the house would be built on a location that would provide for five different overlooks of the Cuyahoga Valley and that allées would extend to allow views of the lagoon and surrounding foliage.

Each year thousands of visitors enjoy Stan Hywet’s artfully landscaped gardens and grounds. Originally a vast estate of more than 3,000 acres, its remaining 70 acres provide an aura of beauty and color that flow into the natural surroundings.

Designed between 1912 and 1915 by renowned American landscape architect Warren Manning, Stan Hywet’s grounds represent one of the finest remaining examples of Mr. Manning’s private work in the United States. In addition, the English Garden, redesigned by Ellen Biddle Shipman in 1929 (and restored in the 1990s) is one of the only Shipman gardens that is open to the public.

Warren Manning and Manor House architect Charles Schneider worked closely together. The result is a remarkable blending of nature and architecture at Stan Hywet.

Built ~ 1912-1915
Length ~ 300 Feet,the basement extends the length of the house
Height ~ The Main Structure is 3 stories; the Music Room is 2 stories; and the Tower is four stories
Square Footage ~ The Manor House is 64,500 square feet
Materials ~ Red brick, steel, sandstone, Vermont slate, copper, oak and plaster. The interior woods include American oak, chestnut, black walnut, sandalwood, teak and rosewood.
Stone Source ~ Stone out of Lagoon was quarried to produce sand and gravel. Stone blasted and removed from the basement excavation was used to build the "Double divided Garden walls" along Garman and N. Portage Path. All exterior steps and door sills were specified to be Euclid Bluestone supplied and installed by R.C. Blum & F.O. Delbridge of Cleveland. The cut stone was specified to be "first quality Ohio sandstone" supplied by the Donnelly & Ricci Co., NY. 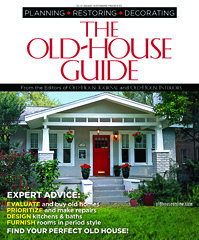 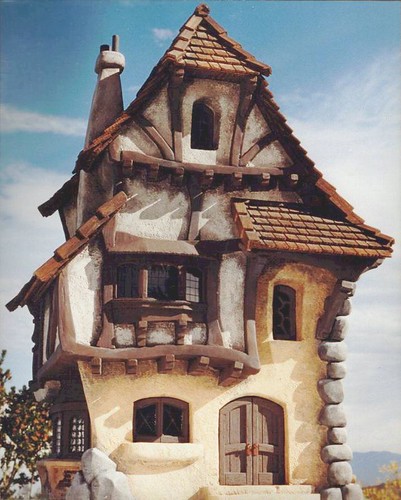 Scale model color corrected from the previous photo. The first time I downloaded this I didnt realize I had color correction on the scanner! www.flickr.com/photos/8331880@N02/3600447061/

Now we can see the window frames and stucco detail a little better. The window to the right over the door has an organic stain glass pattern to it. The double window below has a diamond criss cross in it. The doorknobs themselves are the heads of nails, the rust color is.. well.. rusty nail heads!

As an experiment I tried different patterns for each of the windows. I made wood masters, poured silicone rubber molds, then 2 part resin parts. It saves alot of time re-making components for other houses.

Roughly 24 inches tall mounted on a round base, interior lit. Please see the other photo in the stream that gives the scale better 🙂 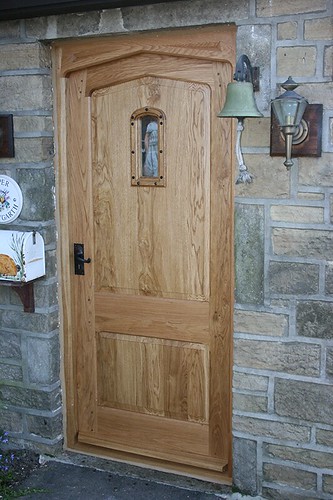 Please visit to see more
sdbdesigns.uk/content/gallery/architecture/doors/doors.html
……..This medieval solid English oak Tudor styled door, with field and raised panels left with it’s own natural patina and with using gun stock tenons and carved spandrels in the tutor door frame. The glazed la jalousie in the centre with hand forged iron nails gives privacy for the occupier of the property made by SDB Designs designed by Sean Broadbent. 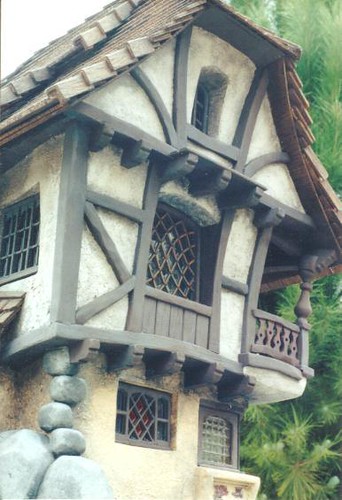 1/2 Scale after windows, rockwork & details added. Wood construction, cast resin details, polyester resin for stucco-like textures. Most lines are bent like a freehand sketch. The wavy diamond pattern window was framed out in basswood then cast in silicone for two part resin castings. The base of the lighthouse model has these same diamond windows, and its far too time consuming to re make so many. When framing out a window I use a wood blank ‘plug’ thats the same dimension as the casting. Then remove the plug and install the casting and its a perfect fit!

Finished piece for a private collector. These are also ideal for G-scale garden railroads, part of a European Village. 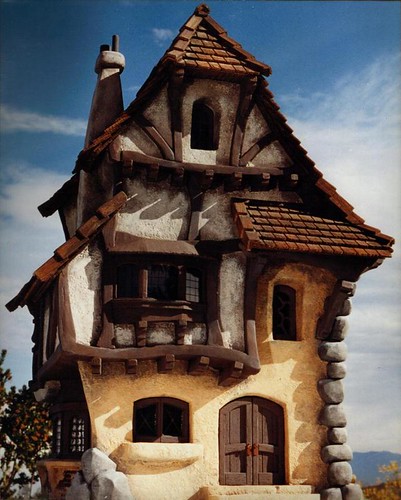 1/2" Scale miniature, shot up on a hill against natural sky & distant landscape. White bounceboard for shadow fill, no flash (I didnt color correct the scanner so its too dark but the weathered paint and textures are more accurate). Wood construction, cast resin details, polyester resin for stucco-like textures. Finished piece for a private collector. These are also ideal for G-scale garden railroads, part of a European Village.

I re scanned the photo this time with color correction (I didnt know it was an option on the scanner argh) so I lightened it www.flickr.com/photos/8331880@N02/3667593460/ That pops the color a little bit better! 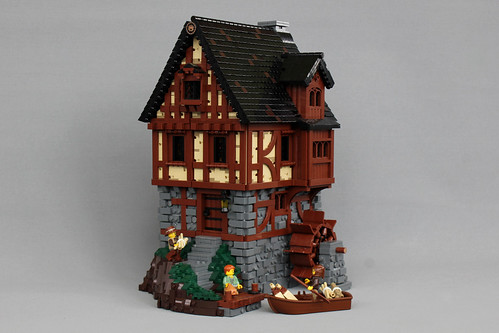 Here is my second entry for the CCC, in the Harvest Building category.
Primarily inspired by this 3d model, the mill has a full interior. I haven’t done a cheese roof like this before, and it’s a technique I’ll likely use a bit more in the future. Besides that I’m especially pleased with the staircase design inside. Credit for the bag design in the rowboat goes to Marcel.

The watermill in Holt is always a busy place, but especially so during harvest season.