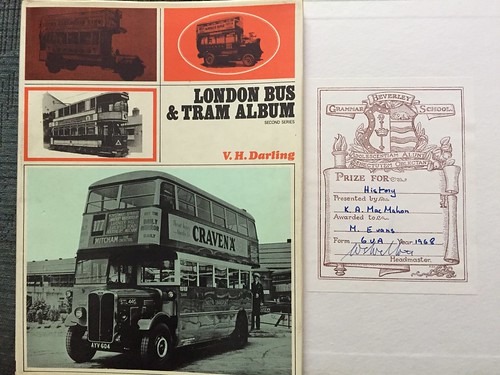 Gracing my bookshelf after over half a century, this reminder of the sole occasion I was awarded a prize at school. My paths to scholastic glory were very limited. Sport? I was beyond useless at team games of all types, athletics and gymnastics too. Music? Nope. Woodwork? Ditto. So that left the academic side of school life. But cross mathematics off the list. Science subjects – I inherited the family genes of total befuddlement. Chemistry gave my father nightmares, mine about physics exams lasted for many years after I had left school. But I did have a retentive memory back then (not now though), and I had affinities for history and geography. I enjoyed French too.

How I came to be mounting the Speech Day podium to accept this unexpected award is a tale in itself. I should have left school already, having sat my A-Levels a few months earlier. I had passed all three, but my brain went on the fritz during the French Literature exam, and the resulting Grade E reflected that calamity. This being a peak of the postwar baby boom, there were not enough university places for all of us aspiring 18-year olds. I couldn’t get in anywhere, not even through Clearing. My A-Level grades were actually better than those of HRH Prince Charles, who got into Trinity College, Cambridge, but there was no university place for me – a very bitter blow at the time.

So I opted to return to my school for a third year in the 6th Form, tail between my legs, and resit those A-Levels. I was surprised at the warm welcome my teachers gave me, and I was very, very honoured by the award of this special history prize. It boosted my confidence, and soon afterwards, the University of Hull made an unconditional offer on the basis of my original grades. I still resat the exams, and got top grades. My school days ended on the highest of notes.

My prize was worth £5. I chose an Economics textbook, which helped me get an eventual A Grade, but I had spare change to buy this – London Bus & Tram Album, compiled by V.H. Darling and published by Ian Allan. This was the second edition of a title that was first published in 1963. I discovered that in Summer 1964 at Hull Central Library, a book that I borrowed repeatedly. It was my introduction to the joys of London buses over the ages, a key step in my overwhelming desire to move to London as soon as I could.

V.H. Darling was the pseudonym of Michael Dryhurst, who wrote the Look In London section in Buses Illustrated during the 1960s. His primary career was in the film industry, which led him later to move to Hollywood. As an assistant director and producer, his credits include Superman and Never Say Never Again. As with so many of us, Michael Dryhurst’s interest in buses has never waned. Now retired and living in Ireland, Michael Dryhurst (no longer as V.H. Darling) continues to contribute to Buses Magazine.