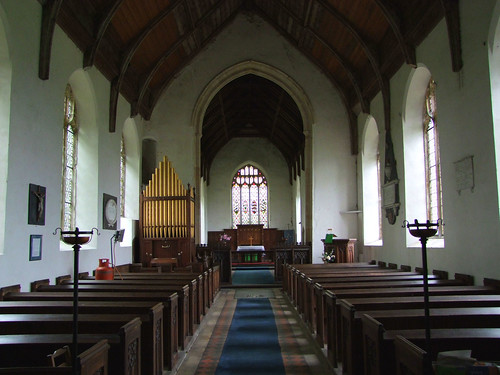 I was heading back towards North Walsham to catch the train, but could not resist stopping at this church of which I had fond memories from my previous visit some eight years earlier. St Nicholas has a rather commanding position on the slope up to the coast, its village to the south in the valley below. The nave and chancel appear to be a late medieval rebuilding – there must have been a lot of money around here between the Black Death and the Reformation. However, the south doorway looks 14th century, so perhaps this is an early Perpendicular building. The south side is attractive, despite the uniformity of the windows. They are so big they make almost a wall of glass in the nave. Interestingly, this side is so like St Andrew at Hempstead, some six miles away, that they must have been done to the same plan, perhaps even by the same mason – the tracery is almost identical, and the windows even have the same headstops, which Mortlock thought might be seahorses. They look more like dragons to me.

The north side is rather bleaker, but the elegant 14th century tower and and thatched roof make up for a lot. That the tower was not rebuilt can be confirmed inside, where the roofline of the earlier church can still be made out on the west wall of the nave. As with the outside, there is a uniformity to the inside, the result of the whole place being built in one go, and then being given a fairly middle-brow restoration by the Victorians; an anonymous spread of tiles and polished woodwork. But there are some fascinating medieval survivals here, a couple of them very unusual indeed. Before the curiosa, the screen: it is contemporary with the building. The dado survives, and the Saints on it are well-reserved, if a little over-restored on the north side.

There are eight of them, and they are arranged in appropriate pairs. On the north side are, firstly, St Andrew with his saltire cross and St Peter carrying the heavenly city and his keys, and then St Simon holding a fishing boat, with St Jude grasping a gloomy looking fish. On the south side are St James, carrying his pilgrim staff and purse, and a rather cheery St John the Divine with his poisoned chalice; and then finally St Thomas carries the spear that pierced the body of Christ, with St James the Less and a fullers club, the instrument of his martyrdom. The heads of the first two look like Victorian repaintings to my uneducated eye, possibly all of the Saints on the north side. But the south side Saints are good.

This is a good screen, and is worth coming to see alone. But there are, as I say, a couple of other survivals here that make it doubly worthwhile. If you look up at the roof, contemporary with the building, you will see first of all how wide it is, and then you will notice what appear to be bosses. Some of them feature Tudor roses, another a lion, but others have faces on them. One face is obviously Christ, with the five pointed beard (to represent his wounds). Another face is surrounded by what must be a crown of thorns, in the rope style familar from the 15th century. A third face is surrounded by rays, and probably represents Christ in glory, but it looks so like popular images of Elizabeth I, bald in her ruff, that it is quite disturbing. Obviously, it cannot be her; the roof is too early, and in any case she was busy having people hung drawn and quartered for displaying Catholic imagery like this. Another face may well be that of the patron who paid for the rebuilding. I say that they look like bosses, and they probably are… except, except. I couldn’t help noticing that the tracery, which presumably was circular, had been broken down so that it only remained on two sides, and it looked rather to me as if they had originally been part of wall tracery plates, perhaps put in their current position by Victorians. But without a closer look it is impossible to say for certain.

There are a couple of good early 20th century features – the excellent window featuring St Cecilia, St Nicholas and Christ the Good Shepherd must have been to commemorate someone to do with the choir; St Cecilia is the patron Saint of music, and St Nicholas of choirboys. The art nouveau lectern is superb, and provides a nice foil to the screen. I don’t normally mention furniture, but the lectern is sensibly chained to the floor, and cannot be removed.

Best of all, on the north wall there is a rather pathetic little crucifix. It was found in pieces over several days in March 1937 on the beach at Walcott, after storms had eroded the cliffs there. It had obviously been buried, and although it looks Victorian it would be romantic to think that it was hidden at the time of the Reformation by locals, before the Anglican reformers came and stole it from them. The saving remnant. Queen Elizabeth was fond of crucifixes herself, having one in her royal chapel. But the common people preserving one? She would have had a fit.