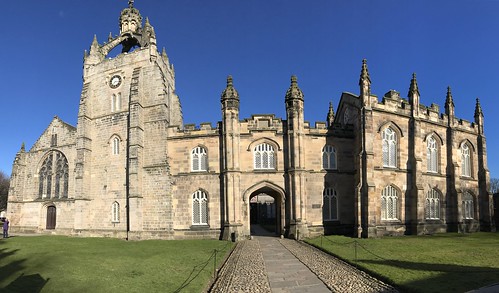 Its historic buildings are the centrepiece of the University of Aberdeen’s Old Aberdeen campus, often known as the King’s or King’s College campus.

The focal point of the college, as well as its oldest building, is the late 15th century King’s College Chapel. A number of other historic buildings remain, with others being subject to renovation and rebuilding in the 18th and 19th centuries. In the early 20th century, a great deal of expansion saw the university buildings increase around the historic college buildings. In the later 20th century, the university expanded dramatically in size, dominating Old Aberdeen and expanding out from the High Street with a number of other buildings.

King’s College was the first university in Aberdeen, the third in Scotland and the fifth in the British Isles. In 1495, William Elphinstone, the relatively newly appointed Bishop of Aberdeen, petitioned Pope Alexander VI on behalf of King James IV to create the facility to cure the ignorance he had witnessed within his parish and in the north generally.

A papal bull was issued in February 1495 (1494 in the calendar of the day) founding the university; a royal charter later that year recognised Aberdeen’s status as equal to that of Scotland’s two existing universities at Glasgow and St Andrews.

As a former professor at the University of Paris, Elphinstone modelled the university very much on the continental European tradition. Hector Boece, a fellow professor at Paris, was awarded the status of first principal of the new institution.
It would not be until 1509, with the issuance of a charter by Elphinstone, that university life at King’s truly began. Construction of the chapel began in 1498; it was consecrated in 1509 and dedicated to St Mary.

By 1514, the university had some forty-two members in the form of both staff and students.

Following the Reformation, King’s College was purged of its Roman Catholic staff but remained largely resistant to change in its methods. George Keith, the fifth Earl Marischal, however was a moderniser within the college and supportive of the reforming ideas of Peter Ramus.

In April 1593 Keith founded a second university in the city, Marischal College. Initially, Marischal offered the principal of King’s College a role in selecting its academics, however this was refused by the authorities of King’s – cited as the first blow in a future rivalry.

In common with Marischal, King’s College supported the Jacobite cause and following the defeat of the 1715 rising both were largely purged of their academics and officials.

The building work on the main buildings of the college began in April 1500[2] on marshy land, supported by large oak beams. The chapel is topped with an imperial crown, i.e. a closed crown, which appears to make a claim to imperial status for the Scottish monarchy. The original was lost in a storm in 1633, and the present crown is a recreation. King’s College chapel retains more medieval woodwork than any other Scottish church, including the choir stalls and screen.

The Cromwell Tower was a building built during the 1650s-60s during the period of the Commonwealth of England, Scotland and Ireland, although finished after Charles II had been reinstalled as King. It was used for accommodation and had an ornate turret at its top. It continues its function as an observatory to this day.

The 1930 construction of the Elphinstone Hall effectively created a two-quadrangle arrangement, connected to the original King’s buildings. The Hall’s front faces outwards, with its lawn effectively creating a central open space now bordered on the other sides by Old Aberdeen’s High Street and the New Building ("New King’s"), constructed in 1913.

Elphinstone Hall is used for functions, dining, and examinations. The rear of King’s College is now used as a sports pavilion. Notably the old college buildings now provide a focal point to the wider university campus. While small in comparison with some of the newer constructions and areas, the building maintains a great history , as well as its oldest building, is the late 15th century King’s College Chapel. 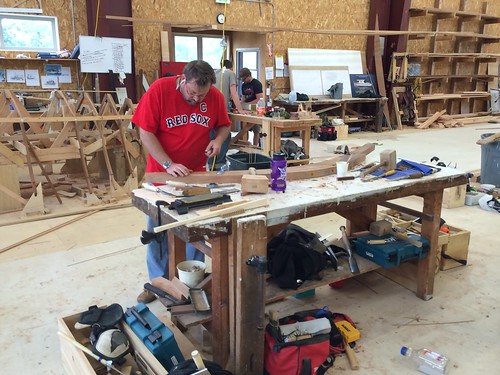 Student Johnathan Ishmael at work cutting the rabbet on the stem of the Hacker-21 Special.

This 21-foot runabout was designed by John L Hacker in the mid-1930’s while working in Detroit Michigan for the Canadian Greavette Company.

The Class of 2014 has been commissioned to build the boat. The new boat will have a bottom laminated of mahogany over marine plywood and mahogany sides and decks. It will be powered by a Crusader 5.7-liter engine.

The Northwest School of Wooden Boatbuilding is located in Port Hadlock WA and is an accredited, non-profit vocational school. You can find us on the web at www.nwboatschool.org .

Our mission is to teach and preserve the fine art of wooden boatbuilding and traditional maritime crafts.

We build both commissioned and speculative boats to US Coast Guard standards while teaching adult students the traditional wood and wood composite boatbuilding skills they will need to work in the marine trades. We sell our boats to help support the School. Please feel free to give us a call should you like to discuss our building a boat for you. 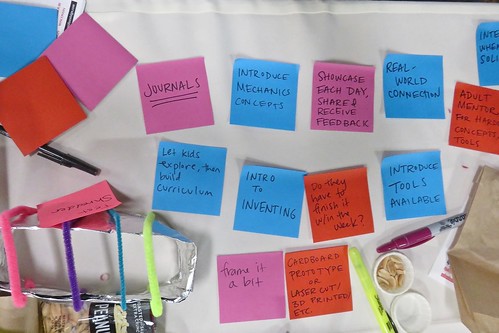 A couple hundred makers, teachers and parents gathered at the 2nd Maker Educator Convening, held May 17 – 18, 2016, at The Crucible in Oakland, CA. This was my first conference as a maker art teacher, and it was a great way to connect with other educators and learn from each other.

We started with a visit of The Crucible, an amazing arts school that offers youth and adult classes in glass blowing, woodworking, jewelry, welding and more — a great model for planning our own makerspaces ( thecrucible.org/ ) .

We then watched and discussed ‘Most Likely to Succeed’, an excellent documentary on education in the 21st century ( www.mltsfilm.org/ ). It shows examples of hands-on, project-based, student-driven and collaborative learning — and how this new approach can help students find a sense of purpose and develop invaluable ‘soft skills’, not just technical skills.

The morning keynote by Nichole Pinkard was also very inspiring, as she presented her findings from the Digital Youth Network in Chicago, and led a discussion about deepening the impact of maker education by bridging learning frameworks.

We then got our hands dirty to map our maker educator network, using blinking LEDs, post-it notes and pipe cleaners to represent our various schools and makerspaces on a U.S. map — which showed clearly that a majority of participants came from California.

Many thanks to the team at MakerEd.org for organizing this gathering. They do a fine job connecting teachers and resources, both at events like these and online: makered.org/ 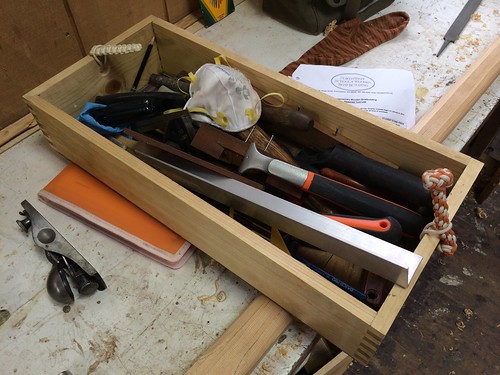 A student work box in the McPherson Shop, where the Drascombe Longboat is being built for the Baja Mexico campus of the National Outdoor Leadership School (NOLS).

The Northwest School of Wooden Boatbuilding is located in Port Hadlock WA and is an accredited, non-profit vocational school. You can find us on the web at www.nwboatschool.org .

Our mission is to teach and preserve the fine art of wooden boatbuilding and traditional maritime crafts.

We build both commissioned boats and speculative boats to sell. Our boats are built to US Coast Guard standards while we teach adult students the traditional wood and wood composite boatbuilding skills they will need to work in the marine trades.

We sell our boats to help support the School. Please feel free to give us a call should you like to discuss our building a boat for you.