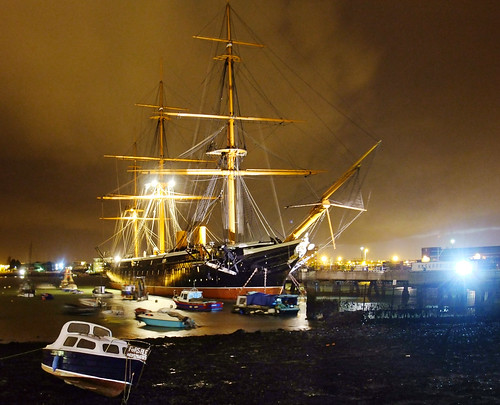 HMS Warrior was the first armour-plated, iron-hulled warship, built for the Royal Navy in response to the first ironclad warship, the French Gloire, launched a year earlier.

When completed in October 1861, Warrior was the largest, fastest, most heavily armed and most heavily armoured warship the world had seen. She was almost twice the size of Gloire and thoroughly outclassed the French ship in speed, armour, and gunnery.

Warrior did not introduce any radical new technology, but for the first time combined steam engines, rifled breech-loading guns, iron construction, iron armour, and the propeller in one ship, and all built to an unprecedented scale.

Her construction started a competition between guns and armour that did not end until air power made battleships obsolete in the Second World War. Warrior became an early example of the trend towards rapid battleship obsolescence and was withdrawn as a fighting unit in May 1883. Listed as part of the National Historic Fleet, Core Collection, she is now a museum ship in Portsmouth, England.

Warrior never saw battle in her time in service, although, when launched, she and Black Prince were the biggest and most powerful warships in the world. Naval technology advanced so fast that both ships were removed from the front line within ten years.

Warrior was saved from being scrapped by the efforts of the Maritime Trust. As the world’s first iron-hulled armoured warship, she was recognised as one of the Royal Navy’s most historically important warships. In 1968 the Duke of Edinburgh chaired a meeting regarding the possibility of rescuing and restoring Warrior, and a year later the Maritime Trust was established with a view to saving the decrepit ironclad and other historic ships. Throughout the 1970s the Maritime Trust carried out negotiations and feasibility studies regarding Warrior, and finally obtained control of the ship in August 1979.

Restoration of Warrior for use as a museum ship began in August 1979, when she began her 800-mile (1,287 km) journey to her temporary home in the Coal Dock at Hartlepool, where the £8 million restoration project would be carried out, largely funded by the Manifold Trust. Warrior arrived in Hartlepool on 3 September 1979. Restoration work started with the removal of 80 tons of rubbish, including a thick concrete layer poured onto her upper deck as part of the conversion to an oil jetty. Over the next eight years, Warrior’s decks, interior compartments, engines, woodwork and fittings were restored or recreated, her masts, rigging and funnels were recreated, and a new figurehead carved from photographs of the original (destroyed in the 1960s) as a guide. She arrived at her current berth in Portsmouth on 16 June 1987, almost fully restored.

The restored ironclad was renamed Warrior (1860) to avoid confusion with the Northwood Headquarters, commissioned as HMS Warrior, which was at the time the operational headquarters of the Royal Navy. In 1995 she received just over 280,000 visitors. 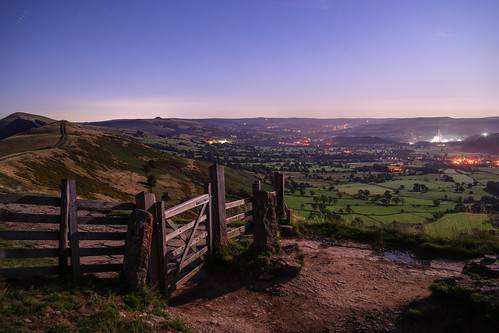 I had a superb night out up Mam Tor this evening under a beautifully bright moon. Zero wind which was a bonus and clear skies above.
I’ve watched hours of astro tutorials on YouTube but when I’m in the field all of the things I have learnt seem to have fallen out of my head. More so when I get home to process the images, blending exposures, focus stacking and noise reduction never seem to run smoothly.
Don’t get me wrong I’m quite happy with this shot but I can’t help thinking it could be better with a bit more pp practice. Plenty of time over winter to up my game.
Cheers to Chris for his awesome company and I hope you got the shot of the road to Edale you were after. Happy days.