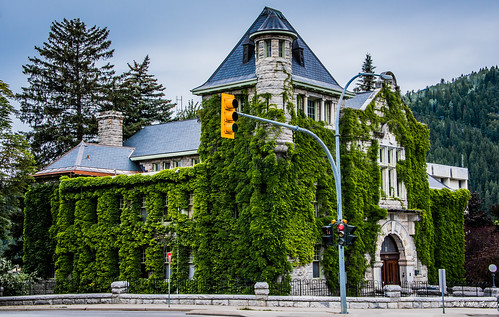 Nelson’s 1909 built courthouse is one of the most photographed building in town. It stands on the corner of Vernon and Ward Streets – kinda hidden behind the ivy,

The building was designed by F.M. Rattenbury, famous for the British Columbia Parliament Buildings and the Empress Hotel in Victoria.

Rattenbury used a composite of Romanesque and Chateau styles to create a structure of stately beauty combined with an imposing strength appropriate to its judiciary nature.

Contractor W.C. Gillett, who was mayor of Nelson from 1906 to 1907, used Kootenay Marble quarried from his own Kaslo site for the construction.

Gillet employed British Columbia Douglas fir for the interior woodwork and the roof was constructed of slate taken from the west coast.

A building long admired for its fine design, the Nelson Court House stands as a testament to beauty and strength in a community that takes pride in its own living history.

ABOUT NELSON:
With 206 identified heritage sites, the city of Nelson has the highest number of heritage structures of any BC community outside of Vancouver and Victoria.

Nelson was one of the first communities in the pilot project for the Main Street Canada Program, with 70 heritage buildings in the downtown core restored between 1980 and 1985.

69 of the sites are on the Canadian Register of Historic Places – sites with a Statement of Significance that identifies the important heritage elements of the site.