nrhp # 92000822- The depot was built in 1902 of red-faced brick and stone trimming. It consisted of a baggage room, men’s waiting room, family waiting room, and the east end lunch room. For 87 years the Chicago-North Western Railroad had passenger rail service at Sleepy Eye. The streamliner “Dakota 400” made its last stop in Sleepy Eye on October25, 1959. After that, the depot served as a freight office.

In the early 1980’s the C&NW Railroad offered to sell the depot and Sleepy Eye Depot Preservation Inc. was formed to purchase and renovate the depot. A fund drive was started and in 1984 the depot was purchased. Since that time many changes have taken place. The building was re-roofed and the bricks were tuck pointed and cleaned. Inside, the woodwork was finished and insulation was inserted behind the wall panels. The floors were sanded and sealed, a new electrical system and gas furnace were installed and the bathroom area renovated. All the windows were replaced with new energy efficient ones. A handicapped accessible ramp and landscaping enhanced the building.

On July 3, 1990 the Sleepy Eye Area Historical Society received the keys to the depot and opened a museum, which displays many artifacts from the Sleepy Eye area. On the grounds right next to the museum stands a tall granite obelisk, marking the gravesite of the Dakota Chief, Ish Tak Ha Ba (Sleepy Eye). In 1992, the depot was placed on the National Register of Historic Places on June 25, 1992. 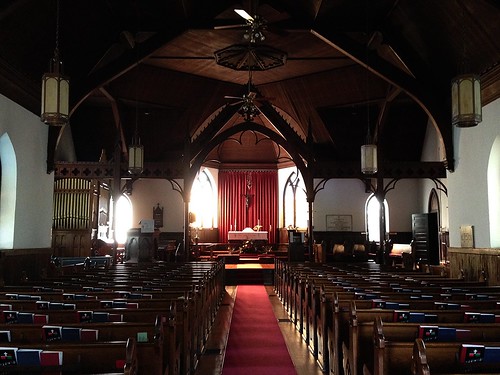 "Intentionally diverse."
Founded in 1866 to serve the spiritual and educational life of newly freed slaves in the community. This building was constructed in the 1890s by a master craftsman who was born a slave, James Vester Miller. Today St. Matthias is a vibrant multiracial congregation meeting in this beautiful historic interior.

Sunday services at 11AM. Musical concerts most Sundays at 3PM.