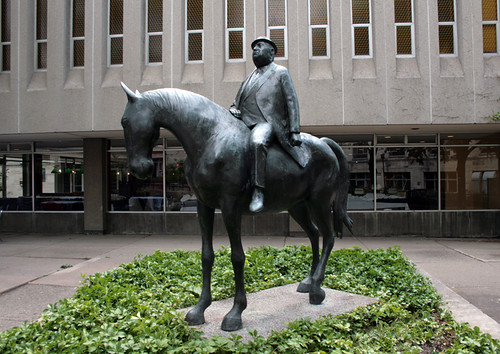 "McElcheran said his businessmen replace the classical hero. Instead of dealing with heroic imagery, he endeavoured to find his idea of the ‘larger-than-life’ in the non-hero. Conversation grew in his mind as he watched the ‘fat cats’ wheel and deal on the corner of Bay and King Streets in Toronto."

"William McElcheran received a scholarship to attend the Ontario College of Art, where in 1948 he graduated at the top of his class and was awarded the Lieutenant Governor’s Medal."

" In his earlier years as a woodworker, McElcheran focused on liturgical art as he began carving church furniture. He went on to become chief designer at Bruce Brown and Briesly architects where he helped co-ordinate the planning and designing of churches and university buildings."

" His countless stations-of-the-cross, stained-glass windows, and bas-reliefs can be seen in churches in Toronto, Hamilton and Quebec. As he began to seek other clients, his work became more secularized, which led to the creation of his businessmen."

"McElcheran is now internationally recognized for his bronze figures of portly businessmen, portraying these self-important men of trade in different settings and situations. His commissioned works can be found in churches, subways, and numerous public places worldwide."

"Since his death in 1999, McElcheran forgeries have appeared on the market, which is indicative of how well regarded and widely accepted his works have become."