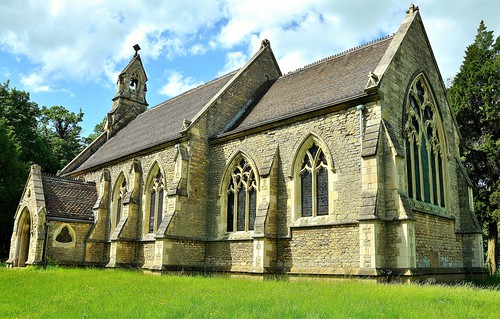 The Grade II* Listed Parish Church of St Mary, in the grounds of Riseholme College, in Riseholme, West Lindsey, Lincolnshire.

The first Bishop of Lincoln to live at Riseholme Hall was John Kaye and he had the 14th century style church of St Mary’s built at his own expense to a design by S.S. Teulon. The foundation stone was laid by Bishop Kaye on 4th April 1851. The church consists of a nave with gabled western bellcote, a gabled south porch, a vestry and a chancel. St Mary’s is built of local stone and the architecture is early Decorated period. All the woodwork is English oak and the font is of stone from Caen. The chancel arch is in a 13th century style and the chancel floor is Victorian encaustic tiles. The windows are by Gibbs.

The organ is a Premier pipe organ made by Cousans of Lincoln. St Mary’s did not have electricity until 1948 and an electric blower was installed for the organ in 1954. 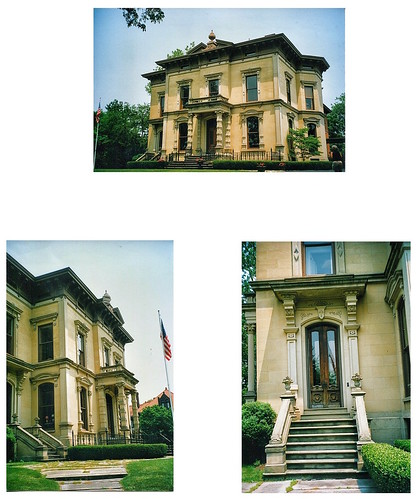 The East High Street Historic District is a cluster of mansions on the eastern side of Springfield, Ohio, United States. Located along one of Springfield’s most important thoroughfares and once home to some of its most prominent residents, the cluster was named a historic district in 1974.
his photograph shows the residence of John Foos, located at the northeast corner of High and Sycamore streets (now 810 East High Street) in Springfield, Ohio. The John Foos Manor was built in 1870 and is an example of High Victorian Italianate architecture. The house was a showplace with hand-carved walnut woodwork; a winding, three-story staircase leading to the third-floor ballroom; a mosaic of Italian tile in the entry hall; a music room boasting an original mirror measuring 5 feet wide and over 9 feet high; and five guest bedrooms on the second floor. Foos came to Springfield from Madison County, Ohio in 1848.
On our visit to the Mansion in 2002 …. I found the former owner of the antique shop smug with is partner…..Possibly no longer with us. May Both rest in peace .
Interior photos in my 100,000 plus archives