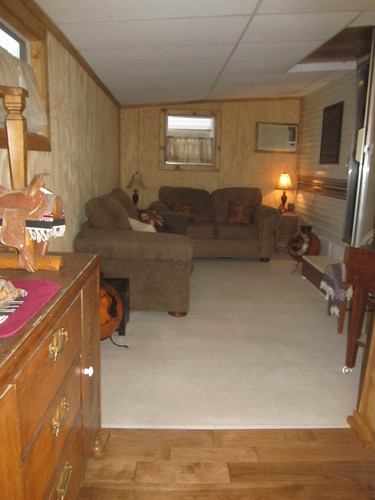 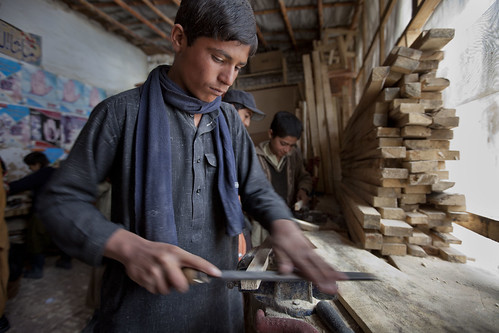 Golam Rasul, 16 years old, learning wood works at the carpentry training depot in the drop in centre in Quetta. He lives in Kerani Road and works as a loader at a market. Boy with cap is 15-year-old Mustafa, who lives in Jungle Bagh and sells seeds and vegetables at a market. Quetta, Pakistan. February 24, 2012. 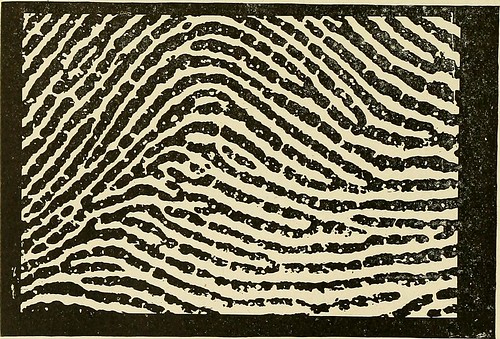 Text Appearing Before Image:
Figure 100. Photographic enlargement of a finger mark on a cashbox. Associated with the Deptford murder. (From Scotland Yard.)

Text Appearing After Image:
Figure 101. Photographic enlargement of the right thumb of AlfredStratton, who, with his brother, was hanged for the Deptford mur-der in 1905 in London. (From Scotland Yard.) Accidental Impressions and their Development 281 named ScheflFer: who confessed that he committed the crime. Thiswas one of the earhest cases on record of the discovery of the author of acrime by imprints left by him at the place where the crime was committed. P •v^ ■ 1 J ? Figure 102. Accidental impressions of the four dirty fingers of a lefthand on white woodwork. To bring all four of the finger prints into thephotograph the impression of the little finger was cut apart and alignedwith the others. (From Boston, Mass.) 2. The Mayor case. A murder was committed in the City of Lyons,and there was no clue except a finger mark on a broken glass bottle thatwas used in committing the murder. This was developed by M. EdmondLocard, the Director of the l*olice Laboratory there, and was found to

New year, new room! Well, sorta. I mean technically speaking, we’re already a month into 2018 so I’m not tooooo sure we can still this part of the "new year" timings… BUT, we are now finally starting a new room renovation for 2018! And at long last, it’s the living room that we’re tackling next.

Our living room has been an absolute mess since.. well, since we moved in. It started as a place to store all our moving boxes whilst we moved in, then somewhere to store DIY tools as we renovated the kitchen, then it became a dumping ground for all the stuff we needed to take to the skip and now finally, almost four years later – it’s empty and ready to renovate!

The photo above is how the room looked the day we moved in (before we moved in, I should say!), so it’s not really a true representation of how it’s looked as we’ve used this space. And truth be told, we haven’t really used this space. The gas fire proved to be handy during our first year in the house as it was the only source of heating, but since that first winter we’ve barely used this room and very rarely spent time here. What the room has actually looked like…

You see what I mean? Not exactly a practical room for chilling out in, is it? This room is also massively chilly thanks to its ill-fitted windows so even at its emptiest, it’s just not somewhere anyone wants to be and generally speaking, I’d rather chill out in bed than in here.

BUT after a good old clear out earlier in January, we finally have a room that’s empty – and all that hate for the room is soon about to change. So I wanted to share some ‘before’ shots of the room before we get started on the demolition work and also explain some of our plans for this room. So without further intro, here’s what the room looks like pre-renovations…

As you can hopefully see – it’s quite a large room. Or at least, large by my books. But the room has no substance; not much furniture, no life, no soul. It does however have quite a bit of character – from the panels around the window to the cornicing at the ceiling and these are the things I absolutely LOVE about this room and can’t wait to celebrate in here. And then of course it also has a rather dated fireplace and half the floor is still covered in hideously red floral carpet (under the sofa!), which I can’t wait to destroy. We have lots planned and work has actually already begun.

We’re keeping this room as light and as bright as possible. I can’t stay away from grey, but I want plenty of lightness to this room. A light grey, white woodwork and pops of colour. Nothing dark (we have enough of that in the kitchen and dining room!) and as much as I love dark spaces – I want this room to feel as though it’s filled with light and punches of colour.

One of the main things I want to do in this room, is to build alcove cabinets either side of the chimney breast. I love how sophisticated and ‘formal’ these make a room feel and they’re a great way to make alcove space more usable too. It’ll also double-up as a way to hide the electric fuse box and provide us with somewhere subtle to hide the TV and all those hideous on-show cables. We also plan on using it to store plenty of books and I’d also like to incorporate another (smaller!) log stack within this too. Basically – this is going to be the feature of the room!

You guys know how much I love the period features of this house and floorboards are included in that. So we’ll be stripping them back and putting them back on show. It’s a much cheaper option of flooring than carpet and probably much more practical with two dogs as well. We’ve restored the floorboards in every room we’ve tackled so far, so why should this one be any different?

I can’t begin to count how many rooms I’ve said we’d be *eventually* buying window shutters for – and we still haven’t. Let’s face it – they’re a bloody expensive investment! I would LOVE to have some shutters in this room, but if budgets don’t allow (they definitely wont allow!) then I’m thinking of DIYing some full panel block-out shutters in here instead. Admittedly it wont quite be the same, but I’m determined to have something similar on the cheap.

We’ll be opening the chimney breast back up so we can make use of the space in order to make some heat for this room! Initially we thought about adding a period fireplace to use an open fire with, but I’m now collaborating with a company to add something a bit different to this room. It’s not a fireplace and it’s not a log burner – but it does make heat. All will be revealed soon!

So we already have one sofa – a dark grey number we bought from Made.com when we first moved in, but this room is huge and we absolutely need another sofa in here. I quite like the idea of non-matching sofas so I’m after a secondhand colourful sofa instead. Something pink or purple-y ideally and similar in design to the Orson sofa. I’d also love a cushioned footstool to use as a coffee table, but I think that one might be a DIY – we’ll see!

I haven’t used ANY wallpaper in this house yet, so I’m thinking of incorporating a ‘feature wall’ opposite the alcove cabinets in here. I want to do something a bit different and something stand-out that doesn’t involve using dark colours – and I think wallpaper might be the next go-to option. It’ll be light in colour and fit in the ‘light and bright’ theme, but just provide a bit of extra interest to the room.

And that’s about it! I’m keeping the room pretty classic and traditional with a sophisticated feel. If you want to see some of the inspiration behind my plans, then feel free to check out my boards on Pinterest. Here’s a little sneak peak of one of them!

So there’s not toooo much heavy renovation work required in here, although we do need to fix up the walls, fix up the ceiling, relocate electrics and chase wires into the wall. But there’s nothing drastically structural that needs work (or at least nothing we’ve discovered yet!) so we’re hoping this will be a fairly easy six-week renovation and will hopefully be nice and smoooooth. Famous last works eh? Anyway – watch this space! …Literally. 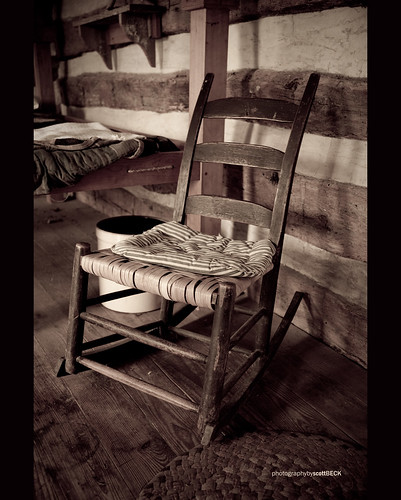 Taken at Old Missouri Town 1855 in the woodworker’s home and shop. Located just east of Lake Jacomo in Flemming Park, Missouri Town 1855 encompasses mid-19th century life through its museum, buildings, crops, animals and interpreters in period dress. The Jackson County Parks & Recreation introduced the park and experience to visitors in 1963. Ever since then, families, schools, church groups and individuals have come to relive the early years by learning about blacksmithing, education, farming, archery, trapping, woodworking, cider making and other arts and crafts.