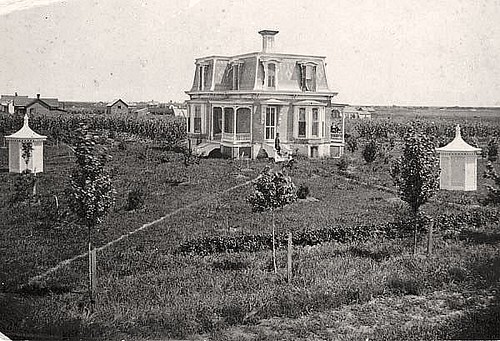 This photo is circa (approximately) 1875. Showing is the residence of J. C. Fraker at 306 East Central Avenue in Wichita, KS. This Second Empire style features a Mansard roof. Stylistically, this home is a clear departure from the simple frame homes of the day (background) that normally had gabled or shed roofs. The roof on this home is clearly designed with style and elegance in mind and sticks out somewhat like a "sore thumb" in the middle of the prairie. Within months after W.H. Sternberg settled in Wichita, ornate homes such as this began dotting the scene. This home (which is no longer standing) is believed to have been designed and built by William Henry Sternberg (1832-1906) who originally came from New York and had much success there incorporating Mansard roofs into residential design. Information indicates that W.H. Sternberg attended the 1855 World’s Fair in Paris where he became introduced to a variety of French and European styles such as the Mansard roof. He came back to the states greatly influenced by these French styles and incorporated them into his residential designs. It’s quite apparent from the newspaper article below that W.H. Sternberg greatly admired the beauty of these Mansard roofs . . . In Norwich, NY where Sternberg was born and raised, he built a house at No. 89 on East Main Street which was noted in an early newspaper article . . .

"Mr. Sternberg’s home was in East Main street at No. 89, now owned by Mrs. Julia O. Stuart, whose father, Charles W. Olendorf, purchased it from the builder, William H. Sternberg, the father of Oscar [Sternberg]. It was the first French or Mansard roof to be built in the village. When Mr. Sternberg advertised it for sale in 1870 he described it as ‘the most stylish residence in Chenango County.’ "

It would NOT have been unusual upon arriving in Wichita (in order to help promote his designing and contracting work) for Sternberg to "announce" his arrival in town by selling, designing and building his most beloved styles (i.e., French or European styles). Sternberg used this very technique later on when he built Sternberg Mansion as a way of showcasing beautiful styles he intended to sell to the public (a model home of sorts). The house above incorporates many of popular elements on confirmed Sternberg-designed homes in New York such as the porches and bay windows resembling those of the Warren Newton home in Norwich and the Mansard roof closely resembles that of one of his own homes on East Main Street in Norwich. Of course the diamond designs within the roof (of which Sternberg was the only known builder specifically making diamond designs) is yet another reason this home is strongly suspected to have been designed and built by W.H. Sternberg. The one-story bay windows are highly reminiscent of the Greiffenstein Mansion in Wichita, KS (also believed to have been desinged and built by Sternberg). See this link to compare the one-story bay windows on the Greiffenstein Mansion with the one-story bay windows on the Fraker house: www.flickr.com/photos/37230477@N06/5119278171/. It’s believed that the Fraker home above was one of the first homes (if not the very first home) that Sternberg designed & built in Wichita. Sternberg came to Wichita in 1875 and this house is believed to have been built in 1875. The photo is circa 1875 and typically photos of new houses were taken fairly shortly after completion (note the newly-planted sapling trees in the front yard). Based on the new dirt which surrounds many of the other plants in the yard, it appears that the other plants were also planted not long before this photo was taken. Streets were dirt at this time and there appear to be two walking paths through the front yard connecting to the street. There appears to be a crop of something behind the Fraker home. This crop probably belongs to one of the neighbors, since J.C. Fraker was a bank president and the family was not into farming. Additionally there are no visible barn buildings in the photo (normally, a source of pride and show for folks when taking pictures) and hence there was probably no farming going on without barn buildings.

Part of the problem with getting homes like this built (at this time in Wichita – 1870s) was that there weren’t many facilities (tools / machines) that could cut special shapes in lumber (curved and decorative shapes). As can be seen in the background here, homes were mainly built from flat planed boards. Millwork equipment was expensive to buy and set-up and demand for decorative millwork products was relatively weak in 1875, but growing with the introduction of the railroads in Wichita in 1872. If homeowners did request a little decorative millwork on their homes, that work was done locally by hand with existing cutting and planing equipment – which didn’t always work out very successfully. Rotary steam-powered table saws back then were designed for cutting large amounts of rough, but straight boards, not the smooth polished millwork we expect today and the thickness of the blades (the kerf, not uncommonly a 1/4" thick) prevented some details to be made at all. Back in New York State (until arriving in Wichita), Sternberg owned and operated a millwork factory making decorative doors, newel posts, turned fence posts, shutters, base boards and more (see Photostream for photo of the Sternberg Sash and Blind Company). This three-story factory had around 30 employees, so Sternberg was familiar with how to make architectural wood products and also sources from back east to get quality work done – if he didn’t do it himself. Sternberg grew up working in his father’s lumber yard in New York. He participated in logging and cut many a tree into lumber on the steam planing equipment. He was truly an expert in the performance characterists of various species of wood and begain building and designing homes at an early age (before the age of 20). In New York, Sternberg had been promoting the use of mansard roofs in residential design. One of Sternberg’s first homes in New York (in Norwich) was built with a mansard roof and it was the first one of this style known in southern New York State. It’s believed Sternberg began using this roofing style after attending the 1855 World’s Fair in Paris. Sternberg would have been 23 years old at the time of the World’s Fair. His biographical sketch indicates he had been working in the lumber industry (his father’s lumber yard) since he was about 5 years old and had begun designing (and building) homes since his late teens. This style of roof was popular in part because with only a little adaptation to what would otherwise have been a gabled or hip-style roof, a Mansard roof added a whole new floor of usable space. In France, the floor space incorporated immediately under the roof was still considered "attic space" and hence was not taxed as being usable floor space regardless of whether it was actually usable floor space or not, so this was one reason Mansard roofs were popular in France. This would have been one of the very first houses in Wichita that Sternberg built and by suggesting this Mansard style to Fraker, it seems apparent that Sternberg was not only trying to provide a distinctive home to the President of the Kansas National Bank, but he was also introducing what was a popular style back east into the growing Kansas frontier. The Fraker family is seen posed with the house. Everyone in town would have known that Sternberg was the builder of this style, so if anyone else liked this elegant roof, they would have also contacted Sternberg for something similar. The house has many design features common to Sternberg including fancy milled woodwork, multiple porches, a Mansard roof, an elaborate shingle pattern featuring Sternberg’s signature diamond designs within the roof and double ornamental flanking gazebos out in front of the property. Other Sternberg residences (such as the Wallace home and the Greiffenstein Mansion) would incorporate double flanking ornamental objects in the front of the home, however instead of double gazebos, these amounted to double ornamental multiered fountains in front of the property with a ground level reflecting pool. These ornamental objects in the front of the property give it a somewhat European court feeling. Clearly this was not a traditional prairie style and these design influences came from outside the area, notably New York and likely further (France).

In style, this house is much more reminiscent of a smaller version of the Greiffenstein Mansion than most of Sternberg’s designs, especially with the use of one-story bay windows. Most Sternberg bay windows were two-story ones. Compare this photo with those of the Greiffenstien Mansion and notice is a similarity of style. As on the Greiffenstein Mansion, this house also has only one chimney flue – a vent for the boiler in the basement which means this house was outfitted with steam radiators in 1875! It’s not known for sure whether steam radiators were installed on the second floor, but it’s likely they were. Some homes of the day (even manufacturerd upscale homes such as this) not uncommonly heated only the main level and allowed the heat to rise for second floor heating with auxiliary heat for the second floor (if you were lucky enough to have auxiliary heat) coming off of a flue pipes or a small coal fireplace. Sometimes the amount of heat could be controlled via louvered vents or louvered rotary dials installed into the floor – which could be opened or closed as needed.

In early Wichita (early 1870s) most of the buildings being put up were of wood. The intent was to replace these wood structure with more substantial brick ones as soon as possible, but wood was fast and easy and cheap. Brick buildings were more expensive and since building demand didn’t require many bricks (people were already using wood) there wasn’t much local capacity to manufacture bricks at this time, although by 1875 that demand was growing rapidly. Shortly after this by about 1880, brick production in Wichita was approaching of a million bricks / day. Initially, bricks for buildings were likely brought in by railroad from Emporia or Kansas City. The chimney flue on the Fraker home is suspected to be a metal flue pipe surrounded by a decorative wooden encasement. The foundation on the Fraker home could very well have been limestone, but it doesn’t appear to have the normal "roughness" of a limestone foundation. Perhaps it was brick or heavy wood piles, but limestone is still a very likely possibility.

No outbuildings (out-houses or stables) are visible in the photo, but for photo purposes those were commonly hidden behind the main structure (hide the outhouse). In other photos at about this time that were known to have had out buildings those outbuildings were purposely "hidden" from view by the house in the photo. A variety of plumbing fixtures and indoor piping was readily available at the time but indoor bathrooms with running water were not common in middle-upper class homes. Indoor bathrooms were only being built in upper-class homes. It would be interesting to know the actual bathing facilities here at the Fraker home.

Any comments, thoughts, ideas, stories or additional information about this photo or this place are always welcome and appreciated.

This photo is provided courtesy of the Wichita-Sedgwick County Historical Museum, (www.WichitaHistory.org). 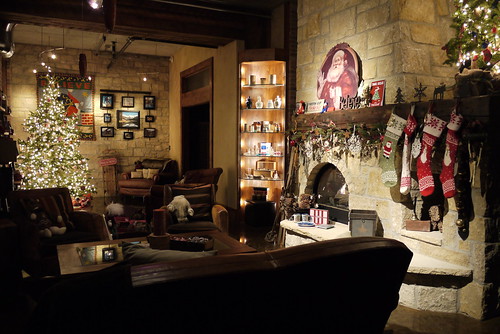