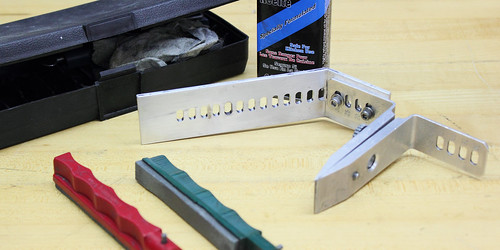 Back in October I volunteered some knife sharpening to an auction to raise money for cancer research. The previous year someone brought in a lawn mower blade, so this year I figured I’d be all-inclusive and offer to do anything with an edge.

So someone dropped off scissors.

If your total exposure to putting an edge on a thing is using the sharpener on the back of an electric can opener, this probably doesn’t raise the sort of panic I felt. If you regularly put edges on fine woodworking tools, you probably have a better idea how I felt. I don’t own a scissor jig, and the thought of free-handing an edge on these things panicked me. My adrenaline shot up again when the owner said the other pair they wanted me to sharpen were Ginghers.

This was back in October. It took this long to figure out how simple the answer really was. I built an extension to my Lansky sharpener that gave me the angles I needed. It’s a simple length of hardware store extruded aluminum with the same pattern of slots milled in it, and a set of threaded holes to make it easy to attach to the Lansky clamp. I used a bending brake to bend it up at about a 45 degree angle, but this stuff is soft. The same could have been done with a vise and a 2×4.

The first pair of scissors had a terrible edge on them. In the past someone had used something that ground the metal at the wrong angle, and chattered enough that the edge on one side was almost serrated. It took close to an hour to clean everything back up and get it back to the factory original angle.

I didn’t go all the way to the finest stone, but I don’t think it was necessary to. The original grind on the scissors was fairly coarse. (Most are, compared to the grinding on a chef’s knife.) It was great to try them on a piece of cloth and feel how easily it cut. I was pleased.

For what it’s worth this kind of thing can be applied to just about any knife sharpening jig that’s built along the same lines as the Lansky. But check your hole spacings and sizes before making the tapped holes.