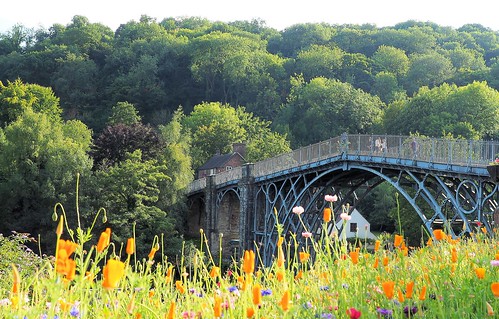 The world’s first iron bridge was erected over the River Severn here in 1779. Britain’s best known industrial monument, the bridge gave its name to the spectacular wooded gorge which, though now tranquil, was once an industrial powerhouse and the cradle of the Industrial Revolution. Ironbridge Gorge is now a World Heritage Site.

At the beginning of the 18th century Abraham Darby 1st pioneered the process of using coke made from local coal to smelt local iron ore, but industrial expansion was hampered by the lack of a bridge over the Severn, which had to be a single-span to allow for barge traffic.

An iron bridge was first suggested by the Shrewsbury architect Thomas Pritchard who designed a single bridge span 30 metres long, but died as work began. The project was then taken over by Abraham Darby 3rd, who cast the bridge in his Coalbrookdale foundry, using 378 tons of iron.

Recent research shows that most parts were individually cast to fit, each being slightly different from the next: and that traditional woodworking-style joints were adapted to assemble them.

Costing over £6,000, this proclamation of the achievements of Shropshire ironmasters was formally opened on New Year’s Day 1781. It continued in full use by ever-increasing traffic until closed and designated an Ancient Monument in 1934. Massive strengthening works were later undertaken, and in 1999-2000 English Heritage assisted with a full survey of this revolutionary and iconic structure.

Press L to view in Lightbox