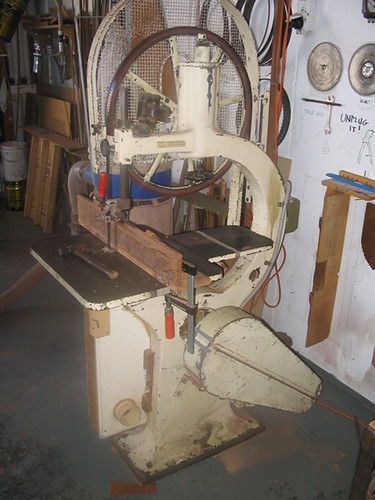 The machine shown in the accompanying photos is a wood working band-saw built in the early 20th century. The plaque riveted to the frame identifies the machine as being caste in the United States by a company called “The Silver Mfg. Co. Makers” based in Salem Ohio. A date on the table-tilt hand wheel at the front of the machine states a patent date of February 1907.

I bought the band-saw privately after receiving the contact of its previous owner from an antique dealer friend of mine. After making contact with the seller, I visited him and was shown to where the machine was stored in an old shed. It laid unceremoniously on its side beneath a large pile of miscellaneous junk. He told me he’d purchased the band-saw some 15 or so years earlier at an auction of old equipment from the original Swan Brewery pattern shop. The machine needed a number of repairs and improvements in order to make it serviceable and has now served for the last 15 years as one of the primary machines in my business, Scarab Studio Wood.

In the days when this saw was built, heavy duty castings for industrial machinery were a common characteristic. This is certainly not the case today. The frame of the old saw, from its top arm right down through its body to its substantial footing, was caste as a single piece. Consequently the machine is very heavy and extremely stable in use. In its basic elements, the design of the modern day band-saw has changed little in the 100 odd years since this proud old machine was commissioned. The old band-saw performs as well today in our fine woodcraft manufacturing business as any modern day equivalent could – and brings a wealth of character to boot!