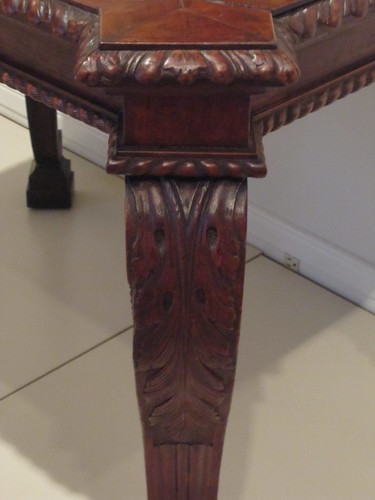 Appearance: rectangular sideboard table on four projecting, canted legs in the form of architectural consoles with scrolled feet on blocks; the sides of each leg are carved with a large volute and an extended, full blown flower; the outward faces of the rear legs are molded; the outward faces of the front legs are molded and topped with carved acanthus leaves; front and side rails are trimmed with a large gadroon molding at the upper edge and rope molding at the lower edge; the front rails centers a large shell flanked by voluted acanthus leaves; the rectangular marble top is set within the rails and bordered by cherry facing strips.

Construction: The rails are tenoned into the legs and fastened with large pins. Three medial braces are open-dovetailed into the front and rear rails. The marble slab rests on these braces and fits into rabbets cut into the front and rear rails. Cherry facings are glued and nailed to the tops of the front and side rails to enframe the marble. The moldings on the front and side rails have complex miter joints at the projecting corners and are glued and nailed in place, as is the applied shell on the front. Each of the original foot blocks under the rear feet is held in place with four large rosehead nails set into countersunk holes.

Label:
William Buckland (1734-1774), an English-trained builder active in eastern Virginia and Maryland during the third quarter of the eighteenth century, was responsible for some of the colonial Chesapeake’s most aspiring architectural productions and cabinet wares. Among the latter is this cherry sideboard table made during the 1760s for the Tayloe family of Mount Airy in Richmond County, Virginia. With its fully carved console legs, gadrooned rails, and marble top, this remarkably well-preserved object illustrates both Buckland’s considerable artistic vision and the skill of his employees. It also alludes to Buckland’s penchant for aesthetically integrated architectural schemes.

Born in Oxfordshire, Buckland was apprenticed in 1748 to his uncle, London joiner James Buckland. The young artisan completed his training in 1755 and soon signed an indenture with Virginian Thomson Mason. In return for passage to America and a modest annual salary, Buckland would serve Mason or his agent for four years "in the Employment of a Carpenter &. Joiner." In fact, Mason had secured Buckland’s services on behalf of his older brother, George (1725-1792), a rising Fairfax County planter and politician. Then in the midst of building Gunston Hall, a brick house on the Potomac River, the elder Mason required the services of a skilled carver and joiner. Like thousands of other British artisans, Buckland undoubtedly accepted the indenture hoping to find better career opportunities in the colonies.

When Buckland arrived in Virginia, the masonry shell of Gunston Hall was apparently complete and ready for its joined components. Buckland and his crew designed and executed woodwork that was surprisingly elaborate and unusual for its time and place. They added a porch in the form of an engaged octagon closely resembling a Gothic garden temple in William Pain’s BUILDER’S COMPANION AND WORKMAN’S GENERAL ASSISTAN (1758). This whimsical portico with Gothic arches and a now missing ornamental finial has no known parallels in contemporary American work. Buckland created equally interesting spaces inside the house, including a templelike central passage with a prominent Doric entablature supported by twelve fluted pilasters. In the parlor, the artisans installed woodwork that blends classical and naturalistic carved ornament with Palladian symmetry. The dining room was executed in the exotic Chinese taste, complete with pagodalike moldings on door and window surrounds. One can only imagine the surprised reactions of Mason’s guests on their first view of his singular new house.

Buckland’s work at Gunston Hall was nearly complete by 1759 when Mason endorsed the back of the Englishman’s indenture with a highly complimentary recommendation, calling him "a complete Master of the Carpenter’s &. Joiners Business both in Theory &. Practice." Two years later, the artisan moved his crew to Richmond County on the lower Rappahannock River where he evidently was commissioned to complete the interior woodwork of Mount Airy, the "elegant Seat" of John (1721-1779) and Rebecca Plater Tayloe.

Built of dressed stone, Mount Airy still stands on a hill overlooking the river; sadly, most of its original interior woodwork was lost in a fire in 1844. Surviving cornice fragments leave no doubt that the joined work was designed and carved by the same hands that produced the exuberant woodwork at Gunston Hall. These richly decorated fragments also hint at the character of Buckland’s fittings. Tutor Philip Fithian was impressed by a visit to Mount Airy in 1774 and took the time to record his observations. He noted that the house had been "finished curiously," perhaps alluding to fanciful woodwork like that in the Palladian and Chinese rooms at Gunston Hall.

Having spent a decade in Richmond County, Buckland and some of his workers moved in 1771 to Annapolis, Maryland, where they were commissioned to complete the interior of a house begun by Samuel Chase. Now styling himself an architect, Buckland later worked on several other projects in Maryland including the highly regarded exterior of the Hammond-Harwood house, also in Annapolis. Buckland died suddenly in 1774 at the age of thirty-nine.

Although none of Buckland’s interiors survive with their original furnishings intact, there is evidence that he followed the lead of British baroque architects like William Kent (1684-1748) in designing furniture whose ornament was coordinated with the architectural spaces for which it was intended. The first indication of that practice is from Gunston Hall. Among the few surviving pieces of Mason furniture is a fragmentary side chair, part of a larger set produced by the Buckland shop. Based on a Chinese-inspired design in the first and second editions of Chippendale’s Director, the Mason chair and its mates must have been intended for use in the Chinese dining room there.

Similar evidence survives from Mount Airy where most of the ground floor furnishings were saved from the fire, among them this remarkable sideboard table and another exceptional example, both clearly made in the Buckland shop. In terms of its ambition and execution, each is strongly reminiscent of the woodwork at Gunston Hall. For instance, the carved console legs on the CWF table have broad-leafed bellflowers intertwined with prominent volutes that are centered by carved rosettes. The volutes extend down the sides of the legs to form raised borders that terminate in voluted feet with matching rosettes. This ornament closely follows that on the corbelled keystones that surmount the built-in bowfats in the Palladian parlor at Gunston Hall. The designs for both projects were likely adapted from plate LII in Abraham Swan, THE BRITISH ARCHITECT (1745), a copy of which Buckland owned. The second Mount Airy table, now at MESDA, is also related to the shop’s earlier work. Based on plate XXXVIII in the first and second editions of Chippendale’s DIRECTOR, it is ornamented with carved rope moldings, an egg-and-dart "cornice," and an applied fretwork of interlocking circles, all of which duplicate elements used by Buckland in the parlor at Gunston Hall.

The parallels between the Mount Airy tables and the Gunston Hall woodwork are significant. As furniture historian Luke Beckerdite has observed, "The architectonic form of these tables and their carved details suggest that Buckland designed them to complement the interior woodwork" at Mount Airy. Indeed, the egg-and-dart carving on the second table is very similar to that on the surviving cornice fragments from one of the principal rooms in the Tayloe residence.

While the designs for the tables were almost certainly selected and adapted by Buckland in his role as master of the shop, the carving was likely done by William Bernard Sears (d. 1818), a British-born artisan who also worked with Buckland at Gunston Hall. Because of its idiosyncrasies, Sears’s carving is easily distinguished from that of other artisans. For example, Sears’s foliage was carved with unusual, lancet-shaped eyes, and he often used pairs of short, parallel flutes to suggest shading on flat surfaces. Sears’s work usually was accomplished with many more cuts than necessary, suggesting that he was somewhat uncertain of his direction. The economy of motion associated with more sophisticated urban carving is missing.

The unusual nature of Sears’s style implies that he may not have completed his training before coming to America. It is possible that Sears’s distinctive approach reflects his skills as a carver-gilder. Sears’s association with that trade is documented by a commission he received in 1772 after leaving Buckland’s employment to carve and gild the woodwork for Pohick Church in Fairfax County. The ornate interior, which was destroyed by Union troops during the Civil War, included gilt ornaments set within large tabernacle frames and a palm branch with corresponding drapery for a pulpit that was surmounted by a carved and gilded dove. Many gilt artifacts display expediency in their carved ornamentation, and Sears’s loose style may reflect this different approach.

While Buckland designed the architectural fittings and furniture and Sears carved them, much of the actual assembly was probably done by the shop’s house joiners, who seemed to have been unfamiliar with standard cabinetmaking practices. That observation is borne out by all of the furniture attributed to Buckland, including the CWF table, which was constructed with coarse thick leg stock of the size commonly used for joists and studs. The mortise-and-tenon joints at the legs and rails are crudely cut and secured with wooden pins far larger than normal, while the three medial braces are set into roughly sawn angled mortises. The rail moldings and central shell are not only glued in place but also secured with exposed finishing nails that would have been quite obvious when new. The deep rabbets that support the marble top were cut into the frame after assembly, thus invading and to some extent compromising the joinery, while the blocks nailed to the bottoms of the foot plinths are clearly an afterthought applied to correct the height of the table.

Distinguished by many stylistic and structural idiosyncrasies, Buckland’s furniture and architectural interiors are valuable reminders of the high degree of interaction between artisans during the colonial period. The CWF table is an example of how the talents of designer, carver, and joiner combined to produce a form meant to interact aesthetically with its architectural setting. The extensive carving and prominent baroque styling certainly represent a regional exception to the prevailing neat and plain taste. On the other hand, the cultural ties to Great Britain seen in the design and construction of the table by immigrant labor reflect the prevalent Chesapeake pattern.