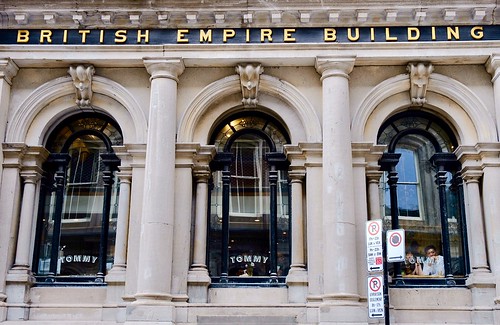 “The British Empire building was originally known as the Exchange Bank of Canada. It was built in 1874 by architect John William Hopkins on property acquired through Alexander Walker Ogilvie, a board member of the bank. The building is comprised of four levels of elevation decreasing by addition from one floor to another. The first two levels are directly inspired by the Italian Renaissance. Despite the dominant Renaissance style, the building reflects an eclecticism from London where the Gothic gained importance in commercial architecture, which in 1873 was well-suited to the head-quarters of a financial institution.

The bank hall and offices were located on the ground floor of the new building, and took up about a third of the building. The remainder of the building was leased out to various firms including the brokerage company of Louis-Joseph Forget and Co., a firm taking care of the financial restructuring of companies, and maybe best known for his involvement in the change-over from horse cars to electric tramways in Montreal.

In the spring of 1883, in an attempt to save the Exchange Bank from failure, the federal government made a loan of $300,000, of which $100,000 was guaranteed personally by Ogilvie. The loan did not prevent bankruptcy, which led to a suit being brought against Ogilvie in 1898 by the Liberal government, wanting to get their money repaid. In 1884, the Exchange Bank sold the property to the British Empire Mutual Life Assurance Co. of London. In 1905, the property was transferred to the Pelican Life Insurance Company and the British Empire Life Office, who contracted architects Hutchison & Wood to do renovations and make changes. In 1909, the company sold its business to Phoenix Assurance Co. Ltd. of London who owned and occupied part of a nearby building on rue Saint-François-Xavier. Phoenix retained the building until 1947 as a leasehold property, since there was a wide range of tenants, including several law firms, looking to occupy offices in the building.

In the 1970s the former local bank building, long held by brokers, was transformed into a boutique.The commercial spaces on the ground floor still include the original Victorian woodwork. The large windows on the ground floor are also original, and after having undergone major renovations in the early 1990s, the building still maintains its original function as an office building.

The British Empire Building is located at 200-210 Notre-Dame West, corner of Saint-François-Xavier in Old Montreal.” 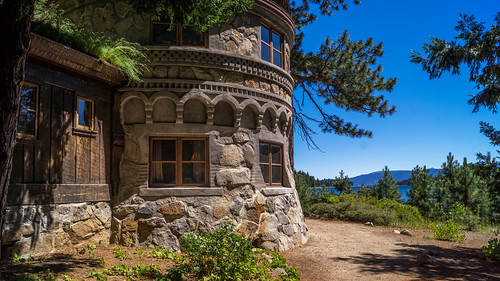 Happy Windows Wednesday!
The story of this castle is far more interesting than my photo of it. It’s massive and when this Scandanavian beauty was designed in 1928 it was with the stipulation that no trees were to be disturbed so it meanders and is tough to take in as a whole so I got close instead. There are no nails, it maintains it’s grass roof, the stonework and woodwork are amazing and it commands a view of Emerald Bay, Lake Tahoe, California.
There is a very long history of this place starting in the 1860’s and culminating in 1929 when this structure was completed. Look it up on the interweb thingy, it’s got a lot of history and some of America’s richest folks had a hand in it.