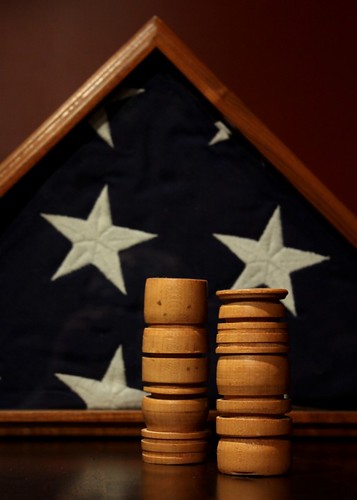 Growing up, I was never very far from Bud and Shirley. They were my Mom’s parents. Grandma and Grandpa. When I was born my family lived in a 3-flat in the city. We lived in one of the flats, and my Grandparents lived in the flat downstairs. I never knew a day without them. When I was 3 or 4 they moved out of the 3-flat to the suburbs, and right before I started kindergarten we left the city too and moved to Villa Park. We still visited with Grandma and Grandpa, but not as often.

After my Father died (I was 7 and my little sister was 5) Grandma and Grandpa moved closer to us in Villa Park, and for most of the rest of our youth we never went a day without them. With my mom having to work sometimes two jobs to keep us afloat, we were so lucky to have them around. I learned so much from them.

I can’t count the number of days of school I missed because Grandma wanted someone to watch General Hospital and Days of Our Lives with. I stayed home to watch the most important day in television history: Luke and Laura’s Wedding! We were also watching together when the Challenger Space Shuttle broke apart just after takeoff on live television.

When Grandma wasn’t watching soaps, she was likely sewing. She made a lot of our clothes growing up, and we were never without a great Halloween costume. She made clothes, doll clothes, dolls, decorations, blankets, pillows. There was NOTHING Grandma couldn’t do with a sewing machine and a glue stick. She was a crafter. Whenever we needed to do a craft project for school, she had all the supplies you could want and was always willing to help on the parts you just couldn’t get right. If you brought her home something you made at school, she would ooooh and aaaah and just be thrilled about it! You were scoring Big Points with Grandma. In 7th grade I made her a set of salt and pepper shakers in woodshop. MAJOR POINTS! Grandpa liked them too!

My Grandfather was in the Army in World War Two. He never told me very many stories about the war, but he was always telling stories about his Army Buddies. I loved hearing those stories and always wanted to be in the Army when I grew up. Just like him. He taught me (or tried to teach me and my short attention span) how to use tools. He even let me use the tools that Mom said I couldn’t touch as long as he was there (and she wasn’t). I had to learn not to be a Goldbricker. (an old Army word for a lazy person that just sat there like a gold brick) When my Mom would ground me, which seemed like a weekly occurrence, I could work off my sentence with Grandpa. One of these times involved cutting down a huge apple tree. By Hand. As in using a hand saw. I practically begged to go back to being grounded, but we eventually got through it. I was always ‘helping’ Grandpa do something. Yardwork, fixing the sink, fixing the car, replacing a light fixture, fixing the washing machine, or building my sister a doll house. He could fix ANYTHING!

There was a time the heater blower motor went out in my car. He was of course at the house ready to replace it at Sunrise. You can imagine that at the age of 17 anything before noon was against the Geneva Convention as far as I was concerend. When my mom woke up and found out what he had come over for, I was promptly dragged out of bed and sent downstairs. He had already pulled the bad motor out and was drinking his coffee by the time I made it down. After he was convinced the junkyard was trying to rip him off by trying to charge him TWELVE DOLLARS for a replacement blower motor (this may have been the first time I ever heard my Grandfather ever use a real swear word) we stormed out of the junkyard with my broken motor. A new motor at the Parts Store was $40, which I was perfectly willing to pay but sometimes a kid just has to know when to keep his trap shut. He spent the rest of the day and well into the night tearing that motor apart, finding the one little piece of bad wire, cleaning it with a nail file and soldering it back and putting the whole thing back together again.

I was 20 years old and only a week away from graduating from Army Boot Camp when my Grandfather passed away.

If I’m completely honest, I don’t think even after almost 20 years I have ever really recovered from that.

A few weeks ago the doctors told my Mom that my Grandma would not be able to live in her apartment any more and would have to go to a long term care facility. My mom and my cousins went to her apartment to get everything packed up and I went with my friend Brad to throw out the old broken television and bring a recliner next door to my Uncle. The rest of the Grandchildren had voted and decided that it was most appropriate that I should have my Grandfather’s flag. I can’t begin to describe how much that meant to me.

I was walking through the kitchen and I saw something on the stove. A pair of wooden salt and pepper shakers. The ones that I made for her in 7th grade. The funny thing is that looking at them now, they were ummm… less than perfect. The only thing about the set that matched was that they were made out of the same kind of wood. No matter how poor my woodworking skills were, she loved those salt and pepper shakers no matter how flawed. The same way she loved all of us, no matter how flawed we all were. She didn’t care. We were all made out of the same kind of wood. HER wood.

There’s nothing in the world quite like a Grandmother’s love.

Early last Saturday morning, after having been visited by the last of the Grandchildren the night before, she passed away.

They are together again.

That’s what this photo is about.