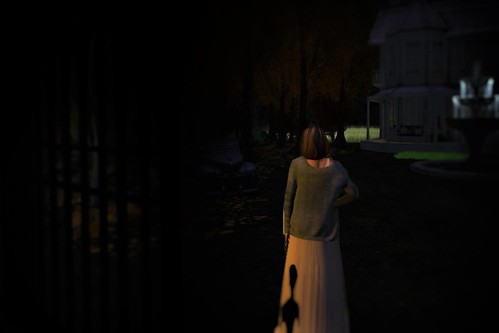 Part 1
October 8, 19__ 7:00 Friday early evening
It appeared that fall was coming early this year. Today had been blustery, overcast, and cool. Leaves were already starting to die and turn.

I meandered up along the cobblestone path that followed the rutty road that led off the main street. I had left me car parked in a small lot on the corner. It would be safe there, I had no company for several Kilometres in either direction. I had driven here directly after work, traveling the 110 kilometre’s in just under 2 hours

I approached the house, stopping at the foot of the stone steps that led up , it had been awhile, and I let the distant memories come back. I stared up at the house that dominated the small hill upon which it had been built . Hill House I thought, remembering a bit of the title from a book in me fathers small library. It was a ghost story book, and as such, I never bothered to read it past the opening paragraph. My feelings about ghosts at the time being that they really do not exist outside people’s somewhat overactive imaginings.

The house in looming above me had stood for over 110 years ,built by Jacob Froes, a great uncle of ours. Old Jacob had been a brooding sort of man, or so I had heard tell, him having died 15 years before my brother and I had been born. But he had definitely built a brooding sort of house, with many crooked corridors, and small rooms, all of which had shutting or sliding doors to keep the heat in. All the rooms still were furnished with old style gas lighting, small lamps on the walls that liked to cast shadows in the rooms that they were hung. The plentiful oak woodwork was very heavily scrolled and decorated with wooden roses and petals, all done by old Jacob, along with most of the houses furniture. I mention the woodworking, for as a young girl, I had thought the roses looked like small shadowy faces, some of them not very pleasant looking, and the thorns looked like spiked teeth waiting to tear and devour one up. Needless to say, the house at that time of my life, gave me the creeps. As did all its occupants at the times I had visited.

There were three of them still living in the house at that time. Three of the six children of the late Jacob and Adelaide Froes.

Jacob had been 45 and a Batchelor, living in the house he had been building and furnishing since he was 25. Twenty long years later he had finished it to his liking. It was then that Jacob decided it was time to start a family. He courted Adelaide, a sheltered 23 year old second cousin still living out in the far country with her family. It was an 8 hour ride by buggy, so it was a long distance courtship.

Once Married, Jacob took Adelaide from her family, and quite soon they started one of their own in the house he had built. They brought forth 6 children into this world, the first 5 ( 2 girls, 3 boys) born in in a period just shy of 5 years. The burdens of bearing and taking care of so many children, in such a short period, all by her young self( apparently Jacob was always working in his basement shop) and added to that her homesickness at being so far away from her family home, cost poor Adelaide her health, and ultimately, after bearing her six child 2 years later, her remaining sanity.

With her mother, In and out of sanatoriums for the rest of her shortened life, it fell upon the eldest daughter, the all of 8 year old Frances, to take over the majority of the responsibilities of raising her siblings. One or another of Adelaide’s sisters did come and stay a spell to help out also for the first few years, but eventually their own Family commitments took precedence and poor Frances was eventually left on her own, to be helped mainly by her younger sister Mary, to care for the youngest four, all boys….

The family had no near neighbours, and lived pretty much an isolated existence, with themselves as company; the 6 children, their frail, wasting away mother Adelaide, and their anti-social, strict church going father Jacob. It should come as no surprise that, that the children took on the characteristics of their parents, all were sullen, lifeless and obedient to a fault. None of em ever dated, or married. After their parents passed on, four of them, the two daughters, and the two youngest sons, lived in the same old stone house together in strained harmony. The two oldest boys would have probably followed suit, but their young lives were tragically cut short in the battle trenches of World War 1 France.

In the dead of winter, 5years after their father Jacob had passed on,, second youngest son, Stephen, packed his bags and left the house one misty morning never to return. He had walked the 4 miles to the small terminal in town, bought a bus ticket to somewhere and was never heard from again. His sisters had found pamphlets about gold prospecting in Alaska, and as they grumbled about how stupid he was to have left, it wasn’t hard to understand at how, at the age of fifty, he had had enough of the constant bickering and complaining that left an unhappy air about the musty old place, and had sought solitude elsewhere.

And so, my earliest recollections of the house and its inhabitants was of the three, Frances, Mary, and Joseph. as the youngest was well into his seventies at the time. Three sourly cranky, unhappy souls. Not a happy family atoll, and not a happy house to be spending time in, even just for a visit while my uncle worked on maintaining the house for them( which, being a relative, he never received more compensation than a grumbled thank you.) Me brother ,Cousin Jesse and I were usually dragged along on Uncles excursions, to keep the “occupants” occupied and out of his hair. The two sisters had been teachers until their retirement, and took great pleasure in having us read to them, happily correcting any errors we made. Not sure what Jacob had done for his living, for he never talked much, just sat in a corner working on his stamps, smoking his smelly pipe, and getting yelled at by his two cackling spinster sisters.

The trio never updated the house much, leaving it as their father had built it. They had one car ( now an antique still sitting in a side yard) between the three of them, but I only ever saw them walk anywhere they went. Which was just to town for food or Sunday Service.

It was during one of the walks back from Sunday mass that a car, taking a corner too fast, lost control and ran into the 3 of them. Mary took the brunt of it, and for the last 3 years of her life became an invalid, much like her mother had been, finally passing on in her bed at the age of 90. Two years later, Old Joseph was found sitting on one of the garden benches by the victory garden he still kept, pipe clenched between his teeth, still smouldering, paralyzed by a stroke at the age of 86, he was sent to an infirmary to live out the last of his days, which as of this writing had not yet ocurred.. So Frances, the oldest child, and oldest living resident of the creepy old house, had lived on in solitude, passing on the night of her birthday, some four years later, at the age of 101. She died in her bed, in the house she had been born in and had lived her whole life. She had been dead 3 days they figured, before my cousin Jesse, who had made it a habit to check on her once a fortnight or so, found her cold lifeless form.
*********

These were me thoughts as I stood there looking up at the dark house where I would be spending the next four days until the Funeral for Frances would take place.

I would be alone for at least the first night, which had not bothered me at the time! Me uncle was away on business, and would not be there until the funeral. Me brother was still away on something called a honeymoon, the selfish prig! Jesse had other matters to attend to and would be joining me as soon as he was able. And so here I was, standing there in the ever darkening twilight, thinking me random thoughts…
Quite suddenly those thoughts were rudely interrupted as I realized a light had turned on in one of the upper front rooms, and a black shadow, unmoving, appeared to be looking down at me from the room’s partially curtained window.

Jesse! I thought, you’re here! He had asked me to come down to spend the time with him, did not want to be alone in the house. But he had rang and told me the night before that he couldn’t make it till Sat Afternoon, and would I be a dear and watch the house till then , leaving me alone! I reluctantly agreed, for I found the house dark and creepy, but at least the Body had been removed from the mourning parlour, I had made sure of that.

My heart racing in pleasure I ran up the stairs and turned the knob of the great oak front door. It was still locked, I ponded over for a sec, and then used me skeleton key and opened it. Oui, Jesse Im Here I yelled happily, but me words were met by dead silence, broken up as my shouts echoed through the large , fast darkening house.

The stairway to the second floor was just off to the side of the long entrance way. I went to the landing and yelled up, Hey lad, didn’t ya hear me. I heard my voice echo a bit upstairs and through the corridor above. I sat down me bag, and took the stairs two at a time, thinking this was no time for teasing. Apparently, it was I thought to me self, for when I reached the upstairs landing and turned towards the room I had seen the figure standin in, the lights were now out, but the figure still stood in front of the window, just visible in the fading light from outside.