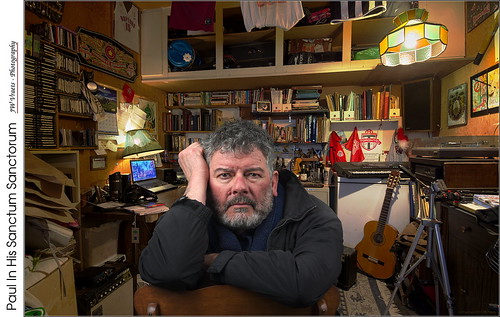 This image is in a series of which it is ‘Flash Composite #5’. Although the path I have taken has been inspired by the work of Joel Grimes (www.joelgrimes.com/Artist.asp?ArtistID=12191&Akey=P7F… ) I have begun exploring highly realistic looks in which the subject has been composited onto a background which relates specifically to the subject.

The subject is Paul Boudreau (www.flickr.com/photos/41474913@N05/ ), one of my friends from the Bando de Kvar (www.flickr.com/groups/2472126@N24/ ) and a good sport for helping out in my strobist (did you know the term is trademarked?) learning process. Big thank you Paul. The background is Paul’s room at the back of the house in which he exercises his creativity, whether it be related to music, computing, photography, woodworking, or supporting his football (soccer) teams. I was told many years ago that creativity can be a messy process. Paul is very creative.

The image is a composite of two images. The foreground is of Paul shot in a two-flash/softbox strobist setup overlaid on a photo taken late the same day of his room. The learning continues as this is another in a series featuring Paul in various composite strobist images. – JW

This is a composite of two images taken at different times and in different places.

The background image details: taken using a tripod mounted Nikon D7100 fitted with a Nikkor 12-24mm lense set to 12mm, ISO100, tungsten WB, Aperture priority mode, f/6.3, 2 sec. The image of Paul (foreground image) was taken using a hand-held Nikon D7100 fitted with a Nikkor 35mm f/1.8 DX lense, ISO100, Auto WB, Manual mode, f/6.3, 1/125 sec., ALSO: a second frame was taken about 3 stops darker to capture detail in the two lamps for filling in for the washed out areas during PP. Portrait of Paul/strobist Info: For the image of Paul, two 47 inch octagonal softboxes one camera left and the other camera right, radio triggered flash units, white background, softboxes set so faces were parallel to the axis of the line between the lense and the subject and about 4 feet off axis, facing each other with the rear of the umbrellas about one foot/30cm behind Paul’s face.

Image of Paul: PP in free Open Source RAWTherapee from Nikon RAW/NEF source file: crop off extraneous detail from the left and right edges of the frame, set exposure to slightly (about ¼ stop) brighter than as shot, slightly increase contrast, sharpen, save, cut out Paul from the background (too messy to elaborate here and still learning how to get hair to come out well), but improving with each iteration), save. Image of the room: PP in free Open Source RAWTherapee from Nikon RAW/NEF source file: scale image to 9000×6000, darken exposure about ½ stop from as-shot, boost contrast and Chromaticity in L-A-B mode, boost vibrance slightly, warm slightly from default to restore a hint of tungsten warmth, enable Tone Mapping and slightly brighten the image followed by a further reduction in exposure to get a ‘realistic’ look as in the original scene, sharpen, save. PP in free open Source GIMP: load the ‘normal’ frame and then load the darker frame as a layer below the ‘normal’ exposure frame use a soft-edged eraser to remove the washed-out lamp areas revealing the better/darker areas from the layer below, increase normal layer contrast slightly, load the cutout of Paul as the top layer and move to a suitable location in the background, do some final cleanup of the Paul layer edges and hair blending, some local dodging of eye highlights and also a bit of shoulder brightening, sharpen, create new working layer from visible result, save, scale image to 6000 wide, sharpen slightly, add fine black-and-white frame, add bar and text on left, save, scale image to 1800 wide for posting, sharpen slightly, save. 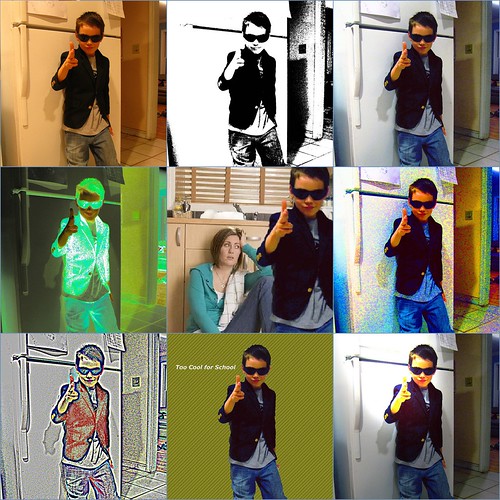 It had to happen sooner or later. One finds oneself over one’s head and discovers he’s been challenged by a master. A master with a track record of making one work for one’s… where am I going with this? Too many ones.

I had the pleasure of working with Xavier of Studio d’Xavier this week. Have you ever seen this man’s work? You owe it to yourself to check it out if you want to see what a studio master does.

In any case, I told Xavier right up front that I was equipped with no more than a Powershot that I try like heck to squeeze out more than point-n-shoot quality, and that I had naught for post-processing here at the Smile Moon Studio.

I had a sneaking suspicion he wasn’t going to accept my self-imposed restrictions for this challenge. And as it turns out, not only was I correct, but his challenge also turned out to be fun and educational (kinda like watching Speed Racer while scarfing down a bowl of Froot Loops on a Saturday morning!).

Xavier’s challenge to me was two-fold. First of all, get GIMP! If you’re new to flickr or photo editing, GIMP is a free photo editing software package that rivals PhotoShop in power and gadgets. It’s available for free at www.gimp.org. Oh, and did I mention: it’s free?

Next, I was to take a photo or several similar photos, then "open up GIMP and process them in nine very different ways. Leave one straight out of the camera. One image should be high key. One should be B&W. One hyper saturated color. If you are brave, swap a background or white out a background in one. At least one should have something cut and pasted seamlessly into the image. If you are working with a portrait, make it a celebrity from a picture you found on the net. You can do whatever you like with the other three."

I posted a note as to what I did with each of the photos in the mosiac.

As a woodworker, I usually hold off on buying a particular tool til the job at hand calls for it. In this case, though, I just picked up the super-duper do-it-all tool that has way too many swiss army attachments for me to learn in one week. But it was a great way to take a crash course in the basics! Thank you, Xavier! 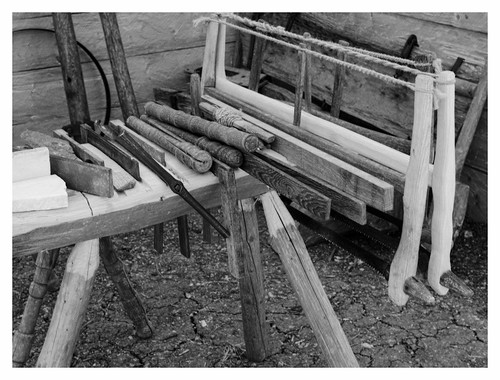 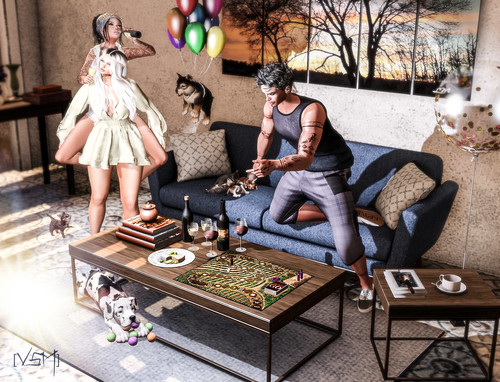 "We’ll have a house party, we don’t need nobody
Turn your TV off, break that boom-box out
We’ll wake up all the neighbors ’til the whole block hates us
And the cops show up and try to shut us down
If you’re gonna be a homebody
We’re gonna have a house party"