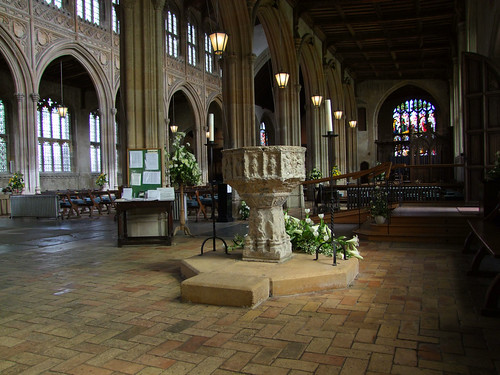 A bicycle shed is a building, a cathedral is architecture. – Niklaus Pevsner

Lavenham sits quietly away from any major road and from any recent century, somewhere near the middle of Suffolk. Despite its remoteness, it is one of the major tourist spots in the county. People come to Lavenham for History, or so I’m told, and undeniably there’s lots of it in this pleasant little town. Town? Well, yes, I think so. As Alec Clifton Taylor pointed out, Lavenham may have barely half the population of nearby Long Melford, but when we walk their streets we are never in any doubt that Long Melford is a village whilst Lavenham is a town.

The two churches are great rivals, of course, although friendly ones I expect. As with Salle and Cawston in Norfolk, the two neighbouring towers are visible for miles around, and I suppose that some people prefer Long Melford to Lavenham, and some the other way around.

It is a commonly held belief that Lavenham was one of the twenty largest towns in England in the late middle ages, but perhaps it would be truer to say that it was among the twenty richest ones. The money came from the production of cloth, and it was this money which gave Lavenham its still-familiar townscape. For when the Dutch weavers settled in Essex at the time of the Reformation, and they were prepared to work for less money than the indigenous population (sound familiar?) the Suffolk wool towns and villages fell into recession. Not much would happen here again until the later years of the 19th Century, and that is why there is so much surviving History for people to come and gawp at, including this tremendous church.

St Peter and St Paul dominates the western approach to Lavenham, and the rest of the town falls away below it. It was built in a single, lengthy campaign from the 1480s to the 1520s, and was bankrolled by the wealthy cloth merchant families, particularly the Springs and the De Veres. These were the parvenu families which had grown wealthy on the spoils of the Black Death, as the old estates were broken up and land became a commodity to be bought and sold. These families were the movers and the shakers of the 15th Century, whose hot-housing of the economy and need to capture the imagination of their parishes led inexorably to Protestantism, the Reformation, the rise of capitalism and ultimately to the Industrial Revolution. If you want to understand the modern world, Lavenham is a good place to start.

The proportions of church to graveyard are so like the near-contemporary situation at Southwold that it must have been seen as the late medieval urban ideal. The tower may have been the design of the master mason John Clerk; the nave, aisles and clerestories are that of his successor John Wastell, who was responsible for the bodies of Great St Mary in Cambridge and St Mary at Saffron Walden, both which bear considerable similarities. The only surviving part of the pre-1480s church is the chancel, which is now almost hidden by the newer chancel aisles and chapels. These seem to grip the chancel, and their great windows create a dynamic effect with the smaller ranges of the nave and clerestory. The result is a dramatic tension, as if this were a trap about to spring, and which encourages the sense of the Perpendicular, of a structure lifting to heaven. The pierced tracery of the nave, aisles and chancel chapels creates the feeling of a clustered and fortified city, the blockish tower a sense of permanence. Long Melford church may have its fabulous range of large nave windows creating a glass house effect, but its early 20th Century tower cannot compete with Lavenham’s late medieval unity. So far, then, Lavenham 1 Long Melford 0.

You enter through the south porch, an elegant and organic extension of Wastell’s aisle, and you step into a church which has a quite different feeling to that of Long Melford. There, you see light – here, it is stone which dominates. The magnificent arcades stretch eastwards like an avenue of trees in a forest, the panelling and carving above them of the highest quality. Beneath them, the interior is light and spacious, despite the 19th Century benches. It would be such an improvement if they could be removed and replaced with modern chairs. In truth, they are just one symptom of what was an overwhelming series of 19th Century restorations here.

In fact, there are surprisingly few medieval survivals. The best of these are the early 16th Century parclosed chantry chapels at the eastern end of the north and south aisles. That in the north aisle is the famous Spring Chantry, fabulously carved in a bubbly and luxuriant style. Mortlock thought that its similiarities with the screen of Henry VII’s chapel in Westminster Abbey suggested it was the work of Flemish craftsmen. That in the south aisle is to the Ponder family. Interestingly, the tomb inside it was brought into the church from the graveyard early in the 20th Century.

The roof to the south aisle is the original, a delightful cavalcade of carving which is set off well by the cleared floor beneath it, a dramatic setting for the font. Incidentally, the font is rather curious. It predates the rebuilding of the church by a century or so, and its scenes are unfamiliar and rather hard to decode. The late medieval stalls in the chancel lift to reveal delightful misericord carvings. The pelican in her piety is a familiar medieval image, but the others are rarer, and odder. There are two musicians, a man and a lady with the hindquarters of beasts. He plays a violin with a pair of tongs, she plays a hurdy-gurdy, believed to be the earliest representation of this instrument. Another man is playing a pig as if it were a pair of bagpipes. There is a jester, and a pair of spoonbills pecking at the head of a man.

Given the vastness and rich patronage of this church, it is perhaps surprising that there are so few surviving brasses. The inlays survive, but the brasses themselves are gone, including that in the Spring chantry, perhaps vandalised by 17th Century puritans, but far more likely stolen by 18th Century metal thieves. Again, sound familiar? All the pre-Reformation brasses were lost. The only two survivors are in the middle of the chancel, a pretty little chrysom brass of a dead baby, and its inscription. He was Clopton D’Ewes, and he died in 1631 at the age of just ten days. Similarly, apart from the chantries, roofs and stalls, not much early woodwork survives. The medieval benches are all lost. The screens are restored, though they are undeniably lovely. The chancel and its chapels are dominated by fairly mundane 19th Century glass. The best glass in the church is in the west window below the tower, and depicts scenes from the narratives of St Peter and St Paul. It was fortunately recovered and restored after a WWII bomb blew it out.

The shop, which used to sprawl across the western end of the nave, is now discreetly coralled in the north-west corner, and beside it is the best second hand book stall I have ever come across in an English church. And this church is always full of visitors, you couldn’t possibly hope to be alone in here like you often can at Long Melford. Whereas Melford church is set apart from its village across the wide green, you can step into Lavenham church within minutes of leaving a shop or pub. This isn’t quite sufficient to give it a second goal, I fear, but it does mean it is no great effort to come and see. And when you step back out, the main street spreads eastwards with its half-timbered buildings and pleasant cottages. You can wander down to the square used in the recent Harry Potter films, where the medieval guildhall tells you as much about the 15th Century wealth of the place as John Wastrell’s church does. You can admire the Swan hotel, a range of 15th Century buildings which will probably have a wedding reception on if you are here on a summer Saturday, but which is in any case far too expensive for the likes of you and me. And after that? Well, mine’s a pint in the Greyhound.

So much for History then. And what is History? Is it things that don’t change, or the constantly unfolding process by which they do? Whenever I set foot in Lavenham church I recall Nikolaus Pevsner’s famous observation that a bicycle shed is a building, a cathedral is architecture. This is quoted out of context so often that it is necessary to recall that Pevsner was not suggesting that a mere building was a bad thing. For him, a building is a space in which humans move, which they use and inhabit. A good church should be architecture, but of course it should be a building too. Architecture does not require people, but a building does. Some would say that it is more important for a church to be a building than for it to be architecture.

The reason I recall Pevsner’s misquoted observation is that I think this place is architecture rather than a building. It is so of a piece, so pleased with itself, so coolly rational in its perpendicular grandness, that it does not need its people to be what it is. The years have altered its fixtures and fittings it is true, but they do not feel an organic part of the structure as a whole. Whereas Long Melford church feels lived in, like a touchstone down the long parish generations, Lavenham church has a colder feel, as if we were in a museum. The sense of History, meaning the past, is undeniable, but where is the story of the ordinary people, where is the sense of the numinous handed down? This is more than an equalising goal, I fear, and when the battle lines are drawn and I must step to one side or the other I will always declare for Long Melford rather than Lavenham.

People who come to Lavenham hope to see the past and immerse themselves in it, and have a cream tea and buy some pot-pourri, and the jolly best of luck to them. Rather that than the dull recitation of dates and the names of great men and battles that I had to copy down from the blackboard in my wasted years at Cambridgeshire High School for Boys back in the 1970s. How on earth could they have made history so boring? Perhaps the school’s oafish, sadistic headmaster CW Hill – the C stood for Colin, but to us he was Crip, because of his striking resemblance to the wife-murderer Dr Crippen – had something to do with it. Whatever, it failed to capture my enthusiasm, and I was made to give it up, along with English Literature, and pursue Science O Levels instead.

Perhaps I should have thanked him, because History and English Literature are just about the only things I’ve been interested in since.