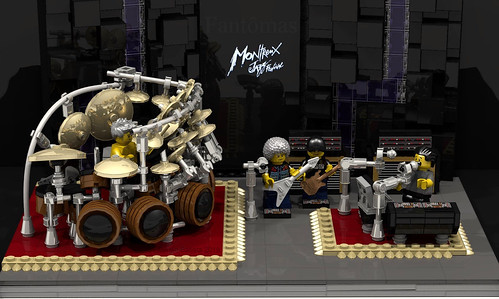 This is my homage to the one of my favorite show/band ever.

Fantômas with Terry Bozzio from Frank Zappa on drums

Fantômas began just before the collapse of Faith No More, as a series of spasmic, avant-garde metal/grindcore songs composed by vocalist and bandleader Mike Patton. Patton then sent the demos to guitarist Buzz Osborne (of Melvins), bass guitarist Trevor Dunn (of Mr. Bungle) and drummer Igor Cavalera (of Sepultura), with the intention of forming a supergroup. Cavalera declined the offer, but recommended who he thought would be perfect for the project: Dave Lombardo of Slayer, who accepted.[5][6] The band have released all of their albums through Patton’s independent label Ipecac, however there was initially interest from several prominent record labels, primarily due to Patton’s commercial success with Faith No More. He recalled "There was a whole lot of interest, at first. People from Geffen and stuff like this came out to the shows. But after the show, they disappeared into the woodwork. There were [also] indies that were interested, but none that I was interested in."[7]

In mid-2005, the band toured Europe with Terry Bozzio on drums