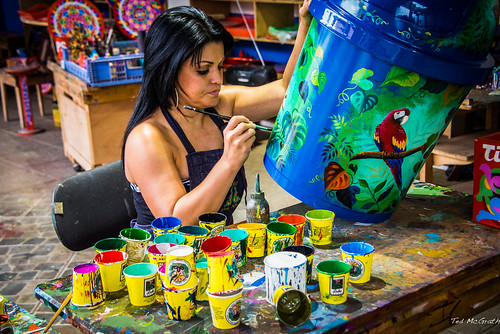 Sarchi artist plies her talents in the Artisans Market. No "made in a foreign country" souvenirs here. Each piece is handcrafted on site.

Sarchi is considered the premier artisan craft destination in Costa Rica. It is primarily known for its woodworking. Visitors can watch many of the artists hard at work in the back of stores and in workshops throughout the town.

After the tour guide for ms Westerdam managed to get his wayward flock back on BUS #4 we left the Poas Volcano area for the city of Sarchi, about one hour away. We were way behind schedule & the guide would not stop the bus so the tourists could get off and take pictures of this oxcart. Hair was being lit-on-fire and some passengers were getting overly annoyed. Yikes!! Too funny!! So this drive by shot is as close as we got – out of the bus window hence the faint visible logo. Off to the the Artisan Market (“Mercado de Artesanías”) we go!!

ELOY ALFARO:
Don Eloy Alfaro in 1920 started his oxcart factory in Sarchi, and on January 18, 1928, Don Juan Kümpeln sold him much of the machinery that was at La Hacienda La Eve. The genius of Don Eloy allowed the installation of an efficient hydraulic energy system that generates 12 horsepower, powered by a nearby river called Trojan, which sets in motion all the machinery required in the workshop. From its founding until now, Eloy Alfaro Factory is known for its excellence in ironwork necessary for the production of carts, especially for the branding of the wheels. It is a complete factory because the axles are lathed, as is the wheele center mass, plus all the hardware. This is the only factory of carts in Costa Rica that has worked and keeps working with hydropower.

THE OXCART:
World’s Largest Oxcart: A huge, brightly painted carreta that sits in the Parque Central in front of the church in Sarchí Norte. It was built in 2006 in order to get the name of the town into The Guinness Book of World Records. The plan was a success.

The United Nations Educational, Scientific and Cultural Organization honored Costa Rica’s vibrantly painted oxcarts in 2005 for their contribution to the heritage of humanity.

SARCHI:
Sarchí is Costa Rica’s most famous crafts center. The town offers more than 200 stores and small family-operated woodworking factories producing wooden bowls and other tableware, fold-up rocking chairs of wood and leather, and a wide variety of kitschy items. The most popular items on sale are "carretas", elaborately painted oxcarts that traditionally carried coffee from the highlands down to the port on the Pacific coast.