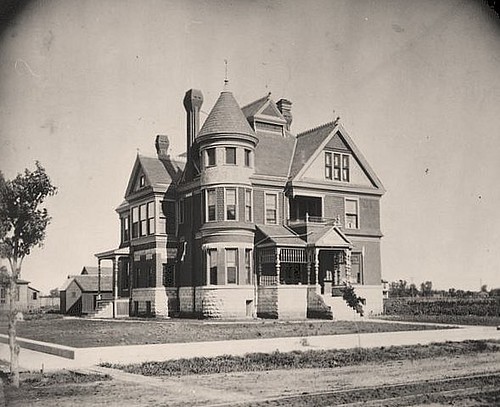 Photo of the Jacob Henry Aley Mansion at 1505 North Fairview in Wichita, KS. This photo was taken about 1890. Note the newly planted tree (left). Construction on the house was started in April 1887 and completed later that same year at a cost of $25,000. This home is a confirmed design and build by William Henry Sternberg (1832-1906), who was originally from New York. True to Sternberg designs, this home features tall, fancy corbelled chimney flues where the decorative brick work continues on through the 2nd and 1st floors, highly decorative milled woodwork (both exterior and interior), a square porch above a triangular-shaped main entryway of the house (also seen on Sternberg Mansion and other Sternberg homes), a roofline that visually seems to be a "hodge-podge" of different pitches and shapes which add visual interest to the roofline, three main entries on the first level, usable / functional porches on the first and second floors, fish-scale shingles on the second floor and a 4th floor dormer at the very apex of the house with a window. Typically with Sternberg designs, rounded towers (and turrets – say over a rounded porch – as in the elegant Hatfield Residence @ 430 S. Seneca) appear on the left-side of the main entry of a house and square towers (or square projections) appear on the right side of the residence (when facing head on). Typically these square projections are on a 45 degree angle to the main structure. Although hard to discern from this photo, the dormer at the very apex of the roof has a row of windows in the rectangular area (see note in photo above).

Years before this house was built, Sternberg was promoting himself as both an “architect and builder” of homes, specifically “designing and drafting” services. Many persons have thought of Sternberg as just a contractor, but indeed his design and architecting services (that he did himself) were a substantial portion of his overall business. An advertisement for Sternberg, Hall & Co in the 1869 – 1870 Chenango County, New York Directory noted, “Being Architects and Builders themselves, they know just what is wanted for a house and how to prepare it. Give them your patronage if you would have everything in first-class style.” It is interesting to note that the advertisement listed "Architects" first and "Builders" second. As with most designers and architects common design themes can be seen throughout their works. Sternberg’s unique mix of residential styles were just as well-loved in the 1800s as they are today and the common themes throughout his works make identification of them fairly easy. As Sternberg worked most of his life in the Wichita area, this particular style of Victorian architecture (although similar to Victorian-era styles) is unique and distinct to the Midwest. Some areas of the U.S. (like the south, the New England area or the southwest) have had long standing residential design trends that have helped to distinguish those areas. The Midwest is no different. Sternberg’s particular residential designs help to distinguish Midwestern Victorian architecture from that of other areas of the country . . .

Mr. Aley was originally from New York and moved to Wichita where started a successful boot and shoe retail business. He also served as a Sedgwick County Commissioner. Today this house is a Local Landmark and is open for public historic tours.

Lumber for building in late 1800s was usually brought in from other areas of the country – especially the Pacific northwest. When "white people" started arriving in Kansas, the prairies were virtually devoid of trees except by streams and rivers. What lumber that was available was mostly cut down by the 1870s. When the transcontinental railroad was being constructed, photography crews followed along taking photos of not only the work but also capturing the hills and prairies in the background. Identical shots today taken from the same vantage points of where those railroad photographers took their photos in 1869 show that virtually all the trees on the prairie today have been cultivated – they are new since then and were not originally there. In the 1800s the prairies were horribly devoid of trees. Indians had a practice of burning the prairies in the early spring. The charred and blacked earth absorbed sunlight better and warmed the ground earlier in the Spring than it normally would have which allowed grasses to grow sooner and most importantly brought buffalo back sooner for grazing. This practice of burning may account for some of the lack of trees in the 1800s. When trees were cut down, the lumber was sawn and planed on location by a steam-powered saw mill. A steam-powered saw-mill was frequently a shoddy open-air shack with a large boiler in the middle which provided steam to a cylinder steam engine. Sometimes steam leaked from boilers or pipes (or both). Steam also blew from the governor as well as it blew from the steam exhaust, so the work was hot and humid. Cotton belts and pulleys connected the equipment and the area smelled like a mixture of fresh wood, grease, burning wood and steam. When a saw mill was in full operation the sawdust produced from the mill provided more than enough fuel to power the boiler. 99% of the lumber used to build the Aley Mansion above (except for a few replacement pieces added in later years) was cut from a steam-powered saw mill. When pieces of pre-cut lumber didn’t or wouldn’t meet specifications the wood was hand-hewn with various hand tools including a broad-ax, an adze, a drawknife, a chisel and/or a hand saw. The wood used in the Aley Mansion is all “true dimensional” meaning that a 2 X 4 is really two full inches by a full four inches. A standard “2 X 4” today actually measures 1.5” X 3.5”. Remember that when this house was built there were no extension cords, electric jig saws, electric nail guns, bucket trucks, belt sanders or other convenient electric tools. This was all done with steam saws, pulleys, sweat, hand tools, square nails and lots of elbow grease. Sternberg had a reputation for only hiring the most highly skilled workers in a trade and his firm was widely known for having the best quality construction available.

Of note, since nails back in the 1800s were iron and easily rusted, window frames (which were subject to a lot of moisture) were not put together with any nails at all! Indeed window joints were joined together using a mortise and tenon joint and this arrangement was held together with wooden pegs. This type of construction can be seen today on any of the original windows of a Sternberg structure. This wooden-peg construction has held up quite well and can be seen on these windows today! The practice of using wooden pegs to hold construction joints together (holding joints together with wooden pegs) is really quite old and first starting migrating to the United States in the late 1700s. Prior to that it was being used in Europe (Germany, especially), Africa and the Carribbean islands. Timber framing of a building (although larger than window frames) is a similar technique of using a wood peg to hold a joint. The German term, "Fachwerk" literally means "framework" and "half-timbering", is the method of creating structures using heavy timbers jointed held together with wooden-pegged mortise and tenon joints. In architectural terms, "Half-timbering" is defined as: a latice of panels filled with a non-load bearing material of brick, clay or plaster, the frame is often exposed on the outside of the building. Carpenters (especially German) would peg joints together with an allowance of approximately an inch, enough room for the wood to move as it seasoned, then cut the pegs and drive the beam home fully into its socket. Half-timbered construction is also seen in the southern United States being brought into the region from highly skilled African slaves and the Carribbean islands. Creole plantations (very sturdy, durable and functional places of work) were frequently done in a half-timbered construction set on porous piles that went deep into the soil. The porous piles sucked water up into the walls of the home where the water then evaporated and kept the house surprisingly cool. So the use of wooden pegs to hold wooden joints together was a regional practice, depending on where the immigrants came from. W.H. Sternberg’s father (Nicholas Sternberg) immigrated to the United States from Germany. Many of Sternberg’s building techniques (including the use of wooden pegs to join wood joints) were without a doubt learned from years of working with his father who learned those same techniques from his father in Germany. In Europe, a cast system of laborers was generations-long and very difficult to overcome. So, in some ways the construction techniques used to build homes like the Aley Mansion in Wichita, KS are hundreds of years old and originated with craftsmen in Germany and other far away places. So in addition to popular design styles, Sternberg was bringing high quality German construction techniques to bear in the western frontier. That construction has held up remarkable well.

From the time he was 5 years old, W.H. Sternberg grew up cutting trees and working in his father’s saw mill. Later he owned his own his own lumber mill for many years. It’s been noted that no one knew the qualities of wood and woodworking techniques better than Sternberg. Sternberg selected only the very highest grade of original old forest lumber to build grand homes like the Aley Mansion. Regarding the quality of the wood used on the Sternberg Mansion, a newspaper article noted that “it is made of wood so hard it will not take a regular nail.” This very dense, high quality old-growth lumber is indeed unlike any lumber on the market today, just another reason these beautiful Victorian buildings deserve to be preserved and saved. The materials simply are not available that they can or ever will be re-made.

Your thoughts, comments, ideas or additional information about this residence are always welcome and appreciated!!

This photo is provided courtesy of the Wichita-Sedgwick County Historical Museum, (www.WichitaHistory.org).