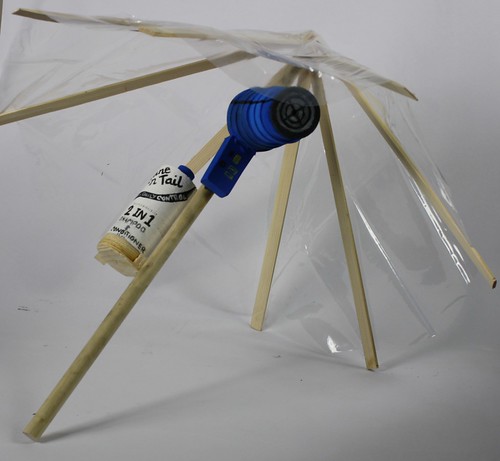 When picking objects from my journal I decided to use the umbrella, hairdryer, and a bottle of shampoo. The idea of this hyper functional tool is that the user can go outside when it’s raining get his/her hair wet, wash his/her hair with the shampoo,and lastly go under the umbrella ,and blow dry his/her hair. To create the shampoo bottle ,and the hairdryer I cut circles using the jigsaw ,and the hole saw ,and then laminated them together.(On the hair dryer, I carved into the “spout” of it to show how the grill lays in it.) To create the umbrella I bought a dowel for the umbrella rod ,due to insufficient amount of wood left, and cut ⅛ of an inch on four 36” long pieces to make the frame of the umbrella.I sanded them down even more knowing that that thinner they were the more flexibility they’d be for bending. On Thursday/Friday ,to get the pieces to bend, I placed all four 36” pieces in a bathtub with warm water(first used my practice one-which turned out close to successful didn’t ben as much as I wanted) ,and let them soak for about an hour. Then I bent them into a horseshoe shape ,using rubber bands to get them to stay there. To keep them from floating to the top, I set little weights on top of the rubber bands holding them down. However, when taking off the rubber bands the next day they went back to being straight ,and one of them cracked in half.
Instead of using the bending technique, on Saturday I cut the pieces of wood in half with the chop saw ,and created 4, 90 degree angles with them, overlapping them on top of the dowel by lamentation ,and used hot glue on the outside of the lamentation, since I couldn’t get them to stay on the dowel with a clamp. After it dried I peeled off the hot glue to leave just the wood glue. Before adding the plastic top, I painted the shampoo bottle/ hairdryer to have them look like the real objects themselves ,and then laminated them to the dowel. For the shampoo bottle I created a shelf to lay the bottle on it ,and put a rod to connect the shelf to the shampoo bottle ;that way the shampoo bottle can be removed, put back, and spun around. Lastly, when adding the plastic to the top of the umbrella I experimented with cellophane, clear plastic lamination, and a clear shower curtain. I found the shower curtain to be the most sturdy. Overall, I thought the project turned out a lot better than I thought considering I was a little nervous to use the saws and work with unfamiliar tools. I liked making this project the most compared to the others and learned a lot about how to work with the wood with all the trial and errors I went through. I’d still like to try to get the wood to bend for future woodworking ,because I think that the umbrella would have looked more clean cut and even. However with lack of time ,and limited resources for cutting more thin strips I think the outcome of the product still looks good.