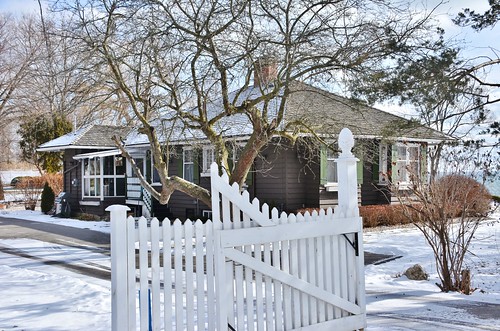 Built in 1905 / 1907 by W. D. Flatt as a summer cottage in the Craftsman Style most favoured by him, the one-storey house has a high truncated hipped roof, with overhanging eaves displaying rafter tails (comparable to the eaves and rafter tails at the Burlington West train station, built in 1909). The central chimney is built of the same large brick as the fireplace. The front elevation, facing the lake, has a large offset projecting gable. The verandah thus created has a continuous band of eighteen-paned windows, some of which slide open on brass rollers. The corners of the verandah window frame are supported by very substantial arched brackets. The double entrance has been narrowed from its original width, which is indicated by the characteristic Craftsman Style entrance steps.

The unusually wide rough-sawn clapboard siding (8 inch exposure) is protected by a natural dark brown stain, and the trim is painted white. This is the earliest known example in Burlington of this treatment, which is also seen in the illustration of the house of Mr Charles Loosley, at Pine Cove, in Flatt’s Lake Shore Surveys booklet in 1912; and in the cottages of the Cedar Springs Community, built by Flatt in the mid-1920s. The white paint enhances the effect of the strong triangle brackets supporting the overhanging eaves of the front gable, and emphasizes the well-proportioned trim of the windows. The double-hung windows have six over one panes in the usual Craftsman style. They are grouped in pairs on the west-side bedrooms and occur singly on the east and north elevations. All the original windows except for the verandah windows and the bathroom window have solid shutters with large metal hinge brackets and crescent moon cutouts.

The Craftsman Style interior is exceptionally well maintained and authentic. The double entrance doors open onto interior double doors leading from the verandah to the sitting room, where a massive brick fireplace with a bracketed wooden mantelpiece aligns with the doors. A bookcase with drawers beneath is built in alongside the fireplace. The dining room contains a built-in cabinet with leaded glass doors not dissimilar to the stained-glass work that was to be featured in Flatt’s own house, Lakehurst Villa, built a few years later. A narrow staircase leads up from the dining room to what was originally an attic over the verandah. All of this interior woodwork, including the window trim and plate rails in the dining room and sitting room and the floors, is completely unspoiled and has its original dark walnut-stained finish. The plaster walls and coved ceilings are in excellent condition. The pantry contains original cupboards.

The house is secluded from the Lakeshore Road by its extensive garden, which contains many old trees, shrubs, and perennials. This seclusion from the road is a strong reminder of the earliest landscaping practices along this stretch of the Lakeshore. The vegetable and perennial beds are in the original locations, where they are placed for the best views from the windows of the house. Some roses remain from the garden of Mr Latham, who grew many prize-winning blooms. The rise of the lake level in recent years has caused the loss of the beach and the original dock.

This is an exceptional example of the Burlington summer house in the Edwardian period. Its first owner was a Mr White, of Hamilton. It was bought circa 1910 by Richard L. Latham, Chief Engineer for the T H & B Railway in Hamilton, and has remained in the family for some 80 years.