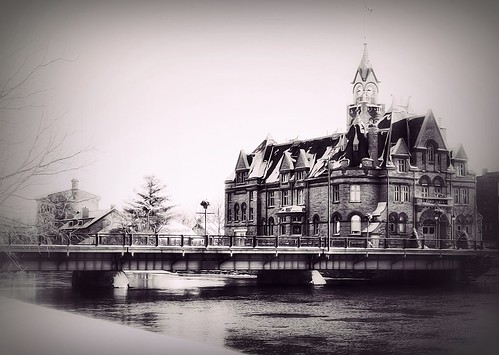 This three-storey majestic stone building, located on the south shore of the Mississippi River, is visible from various points in the town. Its bell tower and turrets extend skyward, emphasizing the picturesque roofline. Its river bank location allows an open view from various points on the far shore and from Central Bridge.

The Carleton Place Town Hall is an important landmark both historically and architecturally. The land was originally owned by William Morphy, one of the first settlers in the area and for whom the town was originally named Morphy’s Falls. He built a house on the present Town Hall site in the early 1820s.

Designed by George W. King and built by Matthew Ryan, the building is a fine example of the Richardson Romanesque style of architecture, which was popular in North America in the latter quarter of the nineteenth century. Richardson Romanesque style is a North American style, introduced by architect Henry Hobson Richardson, with typical features of rough stone, round-headed windows, semi-circular arches around doors and windows, dormer windows and round towers.

– rough-dressed Beckwith limestone laid in an uneven course
– belt courses, window and door arcades and sills of a darker, smoother stone
– variety of window types including semi-circular on the first storey, centre-pointed on the second storey and rectangular on the balcony level
– steeply pitched, truncated hip roof of slate
– main symmetrical west facade consisting of three bays with the side bays projecting slightly
– elliptical fan in the main door
– northwest bay tower with conical roof
– two towers projecting from the southeast bay, one being the square bell and clock tower built for the Fire Hall and the other a small tower on the southeast corner
– elliptical bay window on the central section of the north wall facing the river
– interior wainscoting and staircase of black ash
– fine pine woodwork with a red satin finish in the Council Chamber
– bay window with original stained glass in the bay window of the Council Chamber
– decorative pressed-metal ceilings
– wainscoting, balcony balustrade of pine with oak decoration and arched ceiling of pressed metal of the large second floor auditorium
– raked stage