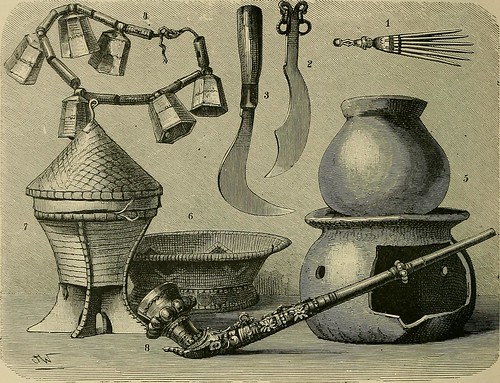 Text Appearing Before Image:
ems, or inscribedtablets of the nature of amulets. In windy uplands the roofs are protected bypoles from being blown off. The interior arrangements vary with the degree of civilization, and dependfurther upon the character of the dwelling—whether occupied jointly or severally, 424 THE HISTORY OF MANKIND whether the families occupy separate apartments or one in common. The Dyaksaffect the long or village house, 80 or 90 yards in length, in which thirty or fortyfamilies live together, but in separate rooms ; while among the Battaks four tosix families at most occupy one house, but they all live together in one room.The separation of the womens apartments is a peculiarity of the Dyaks, butunknown among the Battaks. The simple houses of the Mussulman Acheeneseform an oblong square, containing only the most indispensable necessaries—oneor two pots and pans, a few mats, and a sleeping-place shut off by a curtain,which in the better families is regarded as the owners apartment. There are

Text Appearing After Image:
Malay utensils: (i) Comb from Timor; (2) Knife from the Philippines; (3) Sickle from Java; (4) Cow-bellsfrom Sumatra ; (5) Brasier and rice-pot from Java ; (6) Basket from Celebes ; (7) Rice basket from Java, forcooling steamed rice in the cover ; (8) Brass pipe of the Battaks. (Dresden Ethnographical Museum.) differences also in the fashion of building. The Battaks of Tobah build far moresolidly than the Dyaks, with strong beams and mighty planks, putting much artand industry into the carving and painting of the woodwork. An outbuildingserves in its upper part to store rice, in the lower story as a place of sojourn duringthe day for certain people, also as a sleeping-place, and as a council-house. Theyeven have verandahs on the narrow sides of their lofty houses. A house has tolast until the children are grown up. Dyak house-building is rendered too easyby the gigantic development of the bamboo in their country. Throughout thearchipelago plank houses are considered better than bamboo