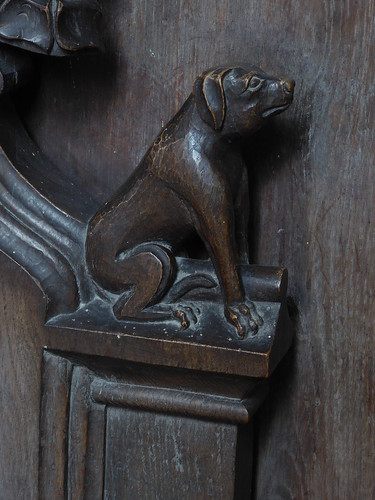 Victorian carving on the north side of the nave. As with many such collections of carved benches in this area the bulk are genuine medieval work whilst a few rows at the front on each side are sympathetically designed Victorian additions (skillfully mimicking the style of the originals).

Where does one start with Stowlangtoft? It was another name I’d seen for years on road-signs while visiting relatives in the area, a name that always stood out and yet we never came here. I had for some time known there were good things in the church here, but the opportunity to explore them failed to materialise, until now.

St George’s church sits on high ground overlooking the main road through the village, a commanding presence rising from the surrounding trees, the tower with its squared off parapet looking a little dour compared to some of the more delicately designed Suffolk towers, but this is a handsome edifice nonetheless, built on a grand scale and all of a piece 15th century Perpendicular, though the windows are strangely narrow for the period, more concerned with height than width, much like the building itself which lacks side aisles, (which never seem to have been intended, this impressive mass was considered complete as it is).

As the church is little used now and generally kept locked it is necessary to seek out the key nearby and then enter by the priest’s door on the south side of the chancel. This reveals the tall and narrow space within from the altar end, and transports one immediately into the midst of the finest carved woodwork in the church. The glass in the windows gives the interior a rather Victorian atmosphere, but this is soon forgotten when one focuses on the extensive late medieval furnishings which are the glory of this church; the nave pews are richly carved with all sorts of fantastical creatures on the bench ends, whilst in the chancel are the stalls with their reading desks and a set of six of the finest quality misericords to be seen anywhere in the country. Most of this appears to date from the last decades of the 15th century but some of the carvings seem to betray an origin in the early decades of the following century. This is a fascinating collection of carvings which kept me occupied for some time.

In the chancel is another late medieval treasure but not an indigenous one, a set of exquisite Flemish carvings depicting scenes from Christ’s Passion that were given to the church in more recent years and incorporated into the paneling around the high altar (flanking the rather stodgy Victorian reredos). At the west end of the nave is the churches oldest feature, the 14th century font, the last relic of the previous church here.

Stowlangtoft church is usually kept locked so keyholder details are given, but fear not for they are friendly and live just over the road. Anyone planning to visit here should allow plenty of time (especially if like me they enjoy the carved wooden beasties of East Anglian bench ends as this church is full of them!). I had a more ambitious itinerary planned for this day, but having spent so long here I didn’t get around to seeing some of my later targets (or they too were locked by the time I did). It was time well spent though, as this was easily the biggest highlight of the day.
www.suffolkchurches.co.uk/stowlangtoft.htm 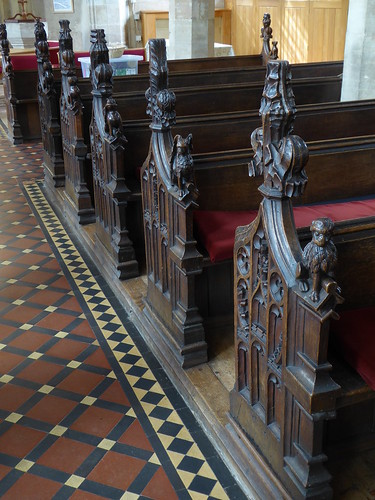 Woolpit church is one of Suffolk’s finest and also an all time favourite of mine. I have loved this church since I first set eyes on it as a young child in the late 1970s whilst attending the wedding of one of my cousins here. I was mesmerized by the riot of wood-carving within, the angels gazing down from the ceiling and the animals perched on the bench-ends, it was so unlike the austere 1960s building we attended mass in at home!

You could say my interest in churches began here; though it had been sparked by an earlier visit to Norwich (which I still recall despite only being at the age of three), Woolpit church and the artwork within it galvanised my resolve to see and learn more, pushing me in the direction of churchcrawling and even choosing a related career as a stained glass artist.

Woolpit was the family home of my Uncle, Aunt and cousins so has been familiar over many visits since childhood. Later the ashes of my maternal grandparents (the only ones I knew) were buried here in the churchyard close to the north door, and more recently my Uncle Rod joined them nearby following his funeral here. He spent his last years living in the cottage next to the churchyard. It is a place full of memories to me.

Back in the late 1990s I submitted a design for a Millennium window for this church based on the famous local legend of the Green Children of Woolpit. It received some support and even Diocesan approval but was rejected in the end on the understanding that the village needed to mark the event with something for everyone, not just the church so an allotment was provided instead. My late Uncle’s calligraphic text on the Green Children legend has hung in the church for many years.

So why is this church otherwise so special? It is a beautiful mostly 15th century building, distinguished externally by a handsome two-storied porch and an elegant tower and spire (a 19th century addition after the collapse of previous towers). Within however the real glory is in the medieval roof, the double-hammerbeam angel roof over the nave is one of the finest anywhere (the angels are skillful Victorian recreations by Henry Ringham after the originals were lost to iconoclasts centuries earlier but restore the intended effect beautifully).

The medieval benches are particularly special here, all of which feature animal carvings at either end which were spared by the iconoclasts since animals didn’t offend them the way saints and angels did. The benches nearer the front of the nave are careful recreations following the originals but the whole set works as a united whole and the parade of quirky creatures up the aisles is a delight to behold.

The church is usually kept open for visitors and shouldn’t be missed, it is in my opinion one of the loveliest in East Anglia.
www.suffolkchurches.co.uk/woolpit.htm