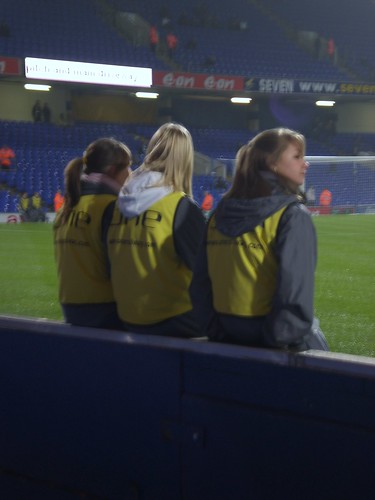 Jon Walters and Pablo Counago netted in either half as Ipswich made it 12 home wins on the spin by brushing aside Southampton.

Walters opened the scoring in fortunate circumstances 11 minutes before half-time when he inadvertently deflected a shot past Kelvin Davis.

Counago made the points safe with a thumping header just after the midway point of the second half.

It was no more than the Tractor Boys – who have the Coca-Cola Championship’s only 100% home record – deserved and with Marcus Evans’ takeover set to be completed later this week, things are really looking up for Suffolk’s only league club as they moved up to fourth in the table.

Ipswich made just one change from the side beaten at Cardiff on Saturday as Billy Clarke replaced the rested Gavin Williams.

Former Ipswich boss George Burley had two changes forced upon him as Christian Dailly had returned to parent club West Ham and winger Nathan Dyer failed a fitness test on a calf problem.

That saw Jhon Viafara start in defence – part of the 13th different defensive combination the Saints have used this season – and on-loan Liverpool winger Adam Hammell made just his second start of the season in a 4-5-1 formation.

Ipswich made a bright start and Clarke fed Counago but his shot from 20 yards flew just over the crossbar.

While the home side were dominating, they were finding the killer ball elusive and it was Southampton who had the next two efforts on goal.

Bradley Wright-Phillips sent his effort wide after good work from Hammell before Hammell himself tried his luck from distance but he was well off target.

The home side came close to breaking the deadlock when Counago slipped past Viafara but Rudi Skacel got back to cut out the ball just before it reached Alan Lee.

But the breakthrough finally came 11 minutes before the break, albeit in fortuitous circumstances.

Tommy Miller laid a free-kick into the path of Clarke and his effort looked to be comfortable for Davis to save until it hit Walters and looped into the opposite corner.

The second half got off to a frantic start and both sides hit the woodwork within six minutes of the restart.

But even before that, the home side were indebted to goalkeeper Neil Alexander for a brilliant save when Youssef Safri’s cross eluded Andrew Surman and hit Wright-Phillips at the back post.

Although his connection was merely with a knee, the ball looked to be creeping in until Alexander’s intervention to tip it round the post.

Town then went up the other end and almost doubled their lead as Owen Garvan rattled the crossbar from 16 yards from a Miller corner.

However, the Saints were still very much in the game and they too hit the frame of the goal when the lively Hammell dinked an effort goalwards from 20 yards but saw it strike the post.

Town were then denied a penalty when Phil Ifil appeared to bring down Lee and although the linesman flagged, he was overruled by referee Grant Hegley.

The Tractor Boys did double their lead in the 69th minute as Williams – on three minutes earlier for Garvan – was the provider, chipping over an inviting free-kick from the left which Counago met with a powerful header that gave Davis no chance.

Saints defender Andrew Davies was denied by Alexander after more good work from Hammell, but there was no way back for Southampton, who have scored just one goal in their last five games. 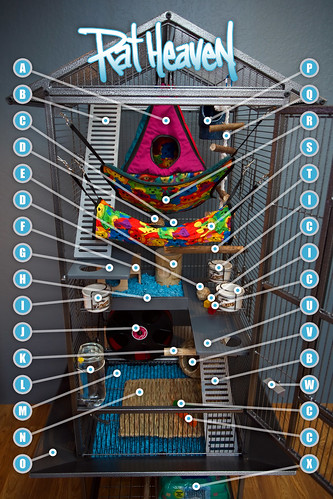 Since people have asked, here’s a breakdown of Rat Heaven! It’s based off the Super Pet (Kaytee) EZ Care Rooftop Flight Cage for birds, with my own custom brackets and shelves, and numerous store-bought pet toys and non-pet stuff that can be used as pet toys.

A: Super Pet Super Sleeper – Sleep-E-Tent with zippers on the corners to convert it into a hammock or whatnot
B: 2′ gray channel grates used as ladders, securely fastened
C: Wood chew blocks to distract the rats from chewing on the cage
D: Grass balls with bells inside for the same goal
E: "Burrow your own home" rat hutch made from a cool dried plant stalk with a hard outer rind and fibrous inner tissue. Supposedly irresistible to rats’ burrowing instincts
F: Timber Hide-A-Way which doubles as access to the upper platform via the hole in the back corner
G: Custom L-shaped upper platform, 20"x20" with 6.5" legs, easily removable when the large front door is open
H: Custom bedding box, 13.5"X10"X1.5" built into lower platform
I: Feeding crocks with individual external access doors and cages to hold them in place
J: Wodent Wheel Senior for quiet, safe exercise, the only rodent wheel approved by the ASPCA
K: Chin-up bar for flabby ratties
L: Super Pet 26oz Chew Proof Water Bottle cleverly and securely mounted inside the cage for clean lines
M: Carefresh Blue Pet Bedding in a tray that’s removable without opening the cage
N: Super Pet Grassy Mat for soothing little rat feet without obstructing bathroom access
O: Super Pet (Kaytee) EZ Care Rooftop Flight Cage with ‘seed guard’ for catching ‘stray objects’
P: Super Pet Small Scatter-Less Pet-Ware Feeder repurposed for a secret hideaway
Q: Sticks on a rope climbing and chew toy. Two in one!
R: Super Pet Cozy Hammock angled to allow unobstructed views into the cage
S: Super Pet Play Tunnel for simulating burrowing and general rampaging
T: Balance Beam to tempt fate
U: Custom L-shaped lower platform, 20"x20" with a 6.5" and 10" leg (with box), easily removable when the large front door is open
V: Super Pet Bigger Giant Roll-A-Nest for cool-downs after running
W: Custom aluminum brackets with stainless steel hardware to support both platforms on all four sides when the outer door is closed, without getting in the way of climbing
X: Under cage storage for food, bedding, and other supplies

– A rounded, power coated cage, aluminum brackets filed blunt, and smooth painted wood make for excellent comfort and ease of cleaning. No sharp corners!
– Ladders and holes provide clear access to all sections of the cage without wall climbing (apart from the secret hideaway) allowing tired or infirm rats complete mobility
– Feeding can be done at any of three locations to keep the rats guessing and engaged
– There are two front doors, a small inner door for more control, and a large outer door for complete cage access
– Everything is removable down to the bare cage in minutes, without any tools
– The entire cage itself breaks down into 1/2" thick parts for moving/thorough cleaning
– The rats have plenty of comfortable surfaces to stand on, yet with little or no training they can learn to go to the bathroom directly into the bottom pan, where they don’t stand, and where clean-up is painless
– Blows away typical rat cages, which are rusty, sharp all over, small, and hard to clean

That about sums it up!

Improve your photography! Use Expositor for perfect exposures.

Expositor ~ An exposure calculator for the iPhone