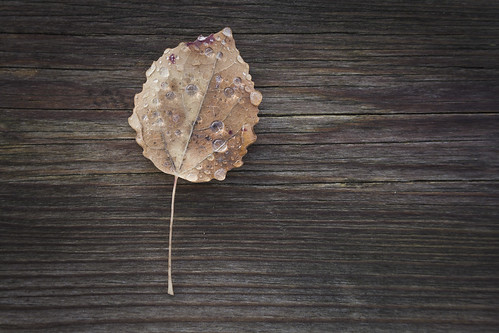 From one October morning, when stepping outside to a fresh autumn air. Seeing the fallen leaves covered with these beautiful droplets, I feelt drawn to zoom in for the details. It is just so much lovely patterns and details! 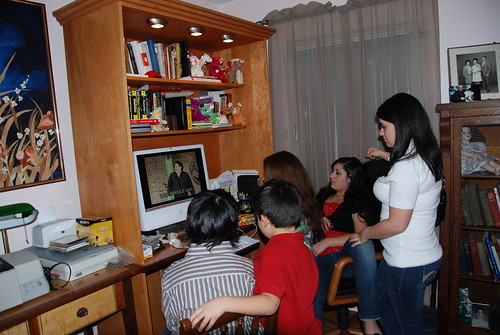 This is my nieces an 2 nephews on a Christmas day watching Basile,
Greek American comedian in my computer room, (my one niece
is also my Goddaughter,}
Both desk and cabinet for this room I made years ago, I love to carve the handles
in sea shells as you must have seen them before, I need to stop flickering and go
back to what I love to do, the crown molding on the computer desk is fiddle back maple
the drawer fronts on the desk is quilted aspen, the cabinet that has some antique
books is an art deco piece that I got for peanuts…..an elephant sold it to me:-)
Now its worth more than peanuts. 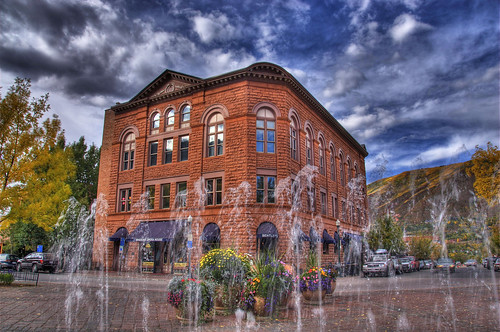 Water Fountain and Flowers grace this historic building with Fall Foliage in the background, Aspen, Colorado.

When the Wheeler Opera House first opened its doors to theatergoers on April 23, 1889, the building symbolized prestige, progress and culture for the citizens of Aspen. Only ten years earlier, the first pioneer prospectors had come over the continental divide from Leadville and into the Roaring Fork Valley. Soon Aspen boomed from a muddy camp with three prospectors into a town with brick and stone businesses and an opera house that was among the largest, most-substantial and best-furnished buildings.

From the start of construction in 1888 to the end of World War II, the Wheeler Opera House saw good times, dark times, and quiet times. Construction on the Wheeler Block begun in early June 1888 by Jerome Byron Wheeler. Wheeler had already made his name in Aspen history as the man who finally completed a working smelter for reduction of silver ore, finally making silver mining profitable and realizing the dream of Aspen’s many mine-holding interests. Designed as an urban, multi-use building, the Wheeler Opera House was to reflect Aspen’s meteoric growth during the 1880s into a full-fledged city. Its basement was to house a barber shop and storage space; the main floor a large clothing store, bank and ticket booth; the second floor six offices; and the third floor, the opera house.

As stone cutters worked at "dressing up the corners" of the building, townspeople noticed that the east wall looked strange, with an apparent concavity. During the rebuilding of that wall, as a swinging scaffold twenty-five feet above the sidewalk gave way, four workmen fell. As a result of this accident, an editorial in the Aspen Daily Times started a campaign to build Aspen’s first hospital, which was completed in September 1891.

The opening of the Wheeler on April 23, 1889, was hailed as "one of the most notable events in the history of Aspen’s most eventful year." Every seat in the house was sold as first-nighters in full dress took their places. Shortly after eight o’clock the curtain was raised and the big, glamorous, and elegantly costumed Conried Company presented a comic opera, The King’s Fool. When the performance ended, celebrations of the theater opening continued through the night.

To reach the auditorium of the Wheeler, patrons used the main entrance on Hyman Avenue. The ticket office was located on the ground floor under the wide stairway, which was finished with a highly-polished wood balustrade. On the third floor at the top of the stairs was the ladies retiring room and cloakroom adjoining the auditorium. Modern and dazzling lighting equipment enhanced the house. The chandelier, a work of art, was suspended for the handsomely frescoed ceiling by a wire rope. This chandelier was the crowning glory of the house, hand-made of hammered brass, trimmed with silver and set with three dozen incandescent lights, each with an opalescent shade, flaring out at the end in the form of a flower. The sloped floor and padded seats permitted visual and physical comfort. The splendid surroundings of fine woodwork, elegant draperies and frescoed walls all superbly lighted by the handsome chandelier created an aesthetic atmosphere to remove patrons for the work-a-day world of the mining town.

The Wheeler stage offered what a modern city theater of the time might have had: eight dressing rooms, the finest obtainable scenery produced by professionals, the very latest lighting equipment and appliances and, finally, a technician to handle the equipment and build any new stage mechanism needed.

The famous "Olio" curtain, a representation of the Brooklyn Bridge, was designed by two New Yorkers, world famous for their scenic art, and painted by no less than Chicago’s opera house scene painter Burke. It pictured not only the bridge and the East River, but ships from over the world.

With the opening of the opera house, Aspen became part of what was known as the Silver Circuit – mining towns that drew big-name entertainment. Offerings at the Wheeler from 1889 through early 1894 included traveling companies that brought Shakespeare, minstrels, vaudeville, comic opera, extravaganza, burlesque, melodrama, concerts, lecturers, and even boxers. Home talent performers presented concerts, musical programs, and some plays and operettas.

The glory days of the Wheeler Opera House were short-lived. With the demonetizing of silver in 1893, the Wheeler became a place of town meetings and benefits for a city that was struggling to survive in a world that had deemed silver worthless.

Although the Wheeler didn’t close, it made little news until 1912 when two fires ripped through the three-story building in one week, gutting the opera house. The first fire occurred after a moving picture show at 10:30 p.m. on November 12, presumably caused by defective electric wiring.

The second fire, attributed to arson, occurred only nine days after the first. It was devastating. The ¾" headline of the town paper exclaimed, "Fiendish Firebugs Again Rampant in Our City, Wheeler Opera House Partially Destroyed, the Prettiest Little Structure of Its Kind Between Pueblo and Salt Lake City is Sacrificed to the Venom of a Degenerate Unfit to Remain Upon Earth."

The fire was actually started in three places; in or near the box seats; among the scenery on the stage; and in the locked ushers’ room, originally the ladies’ retiring room. It was discovered a few minutes past 2am and the Fire Department did not have it controlled until 4am. On stage a chimney effect developed due to the unfortunate positioning of a skylight directly above the stage. Flames were pulled upwards through all the sets and scenery and then spread out over the auditorium into the attic between the roof and ceiling. The heavy timber trusses became charred, but remained structurally sound. The auditorium ceiling’s wooden lath burned next and the plaster, having lost its support, fell in chunks covering the specially fabricated opera chairs. Heat became so intense that the steel support cable for the beautiful electric chandelier melted and it too came crashing down.

The Wheeler had a special place in the hearts of Aspenites and its destruction was particularly lamented by the town newspapers:

"It makes one almost sick to go through the main entrance, the door through which all of us have passed so many times to be amused and to enjoy a few happy hours. May the Lord help the one who started the fire in this magnificent structure – the people of Aspen won’t, that is sure." – November 22, 1912 Aspen Democrat Times

After the fires, the opera house sat vacant. To stop the vandalism and protect the public, the space was closed off from the rest of the building. The street-level spaces, mostly undamaged, continued to be occupied by local businesses. But the laughter and applause of an audience didn’t ring through that third floor again until more than 30 years later.

Wheeler 1930’sDuring the Wheeler’s dark decades, the children of Aspen used it as their playground. One of Glenn Beck’s fondest memories of childhood, was playing in the Wheeler Opera House. The top-floor windows were broken out. And flocks of pigeons lived up in the theater. "We could go up the back stairway of the store and finally crawl out right under the stage. We played cops and robbers. There was a rope from the top of the ceiling. We could get on the balcony and swing clear over the stage. It was a long way across."

In June 1946, the Aspen Company leased the opera house and other unrented portions of the Wheeler building from the City with the required intention to improve and repair the building. It had "fallen into disrepair and (was) rapidly deteriorating due to the financial inability of the City of Aspen."

Lilian Gish 1984Elizabeth Paepcke, often cited as the "matriarch of modern Aspen" and, with her husband Walter, a major force behind the town’s renaissance as a cultural center, decided that the opera house must be restored. But this renovation did not even attempt to recapture the grandeur of the original. "The seats were plain wooden benches," says Jim Markalunas, "and you had to watch where you sat because of pigeon droppings."

Over the years, the improvements continued on a piecemeal basis. Around 1960, seats were put in and the walls became a rich red with stenciled gold fleurs de lis. Elizabeth Paepcke bought a crystal chandelier to replace the one lost in the fires of 1912. Through the 1960s and ’70s, the Wheeler was used mostly as a movie house. By the late ’70s the City of Aspen, which had acquired the building for back taxes during the early part of the century, started to grapple with the question of whether to sell or renovate the theater. The council decided on renovation. A committee was appointed to explore how the job should be done, and finally an election was held and voters were asked to approve a real estate transfer tax that would fund the restoration and pay the theater’s maintenance and operating costs. The tax was approved by the voters in 1979. The $4.5 million restoration was completed in 1984.

The Wheeler Opera House reopened with a Gala Public Opening on Friday, May 25, 1984 with a performance of George Bernard Shaw’s Arms and the Man. The following night featured a modern dance program by Moses Pendleton, a founder of the Pilobolus Dance Company, who was hailed as one of the country’s most innovative choreographers. Sometime-Aspenites James Levine, conductor and director of the Metropolitan Opera, and Lynn Harrell, internationally renowned cellist, played a special concert on Sunday, with Levine on piano and Harrell on cello. The gala concluded with a salute to the silent film, The Wind, which stared Lillian Gish. Miss Gish was on hand for the screening, with Denver ragtime and jazz pianist Hank Troy and violinist Becky Burchfield accompanying the silent film.

Twenty four years after its latest renovation the Wheeler continues to serve Aspen as a world class theater, performance venue and town meeting place and is still considered not only the crown jewel of the town, but indeed the art and soul of Aspen.