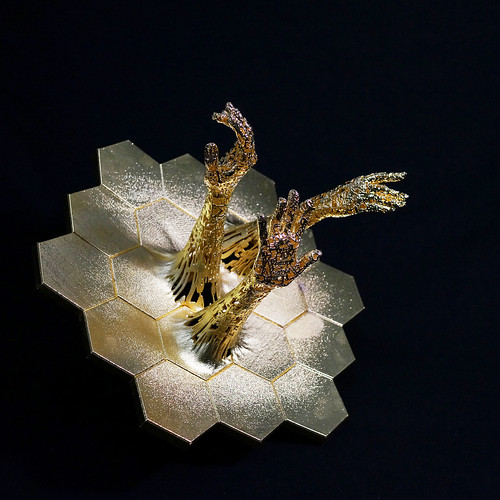 Artists of all kinds were invited to apply for the chance to visit our Goddard Space Flight Center to be inspired by the giant, golden, fully-assembled James Webb Space Telescope mirror. Webb has a mirror that is nearly 22 feet high and (to optimize it for infrared observations) is covered in a microscopic layer of actual gold. Because of Webb’s visually striking appearance, the project hosted a special viewing event on Wednesday, Nov. 2, 2016.

The artists spent several hours sitting right in front of the telescope, where they sketched, painted, took photos and even filmed a music video.

While some of the pieces of art were finished at the event, most of the artists went home with their heads full of ideas and sketchbooks full of notes.

ARTIST’S STATEMENT ON THIS WORK:
The purpose of the JWST mission. To look back in time and see how our universe was formed. To raise questions we never thought to ask. To reach into the unknown.
"Astronomy by its very nature drives us toward the unknown…there’s something uniquely human about wanting to find out about our surroundings, to explore our world, to discover new things. That’s what astronomy is all about." – Amber Straughn
Exploration was created using 3D scans of John C. Mather, astrophysicist, cosmologist and Nobel Prize in Physics laureate and Amber Straughn Astrophysicist; Deputy Project Scientist for JWST Science Communications. The arms are reaching out of the primary mirror of the JWST as though they are reaching through a portal to the ends of the universe. As they push through they are enveloped in information, formulas that have helped unlock the secrets of the universe.

John describes the Friedmann-Lemaître-Robertson-Walker metric which is used to wrap the arms of the piece. This metric is an exact solution of Einstein’s field equations of general relativity.

"The equations wrapped around the hands in this sculpture are the "FLRW" cosmological solution to Einstein’s field equations of general relativity, paired with the formula that describes a parabolic mirror. One might say we build one (the telescope primary mirror) to test the other (Einstein’s equations)."

The third arm is my own; the arm of an artist. The abstract idea of studying what you don’t know is hard to grasp. This is a disconnect that art can help fill in. Art asks people every day to think about abstract ideas and opens a doorway for creative thinking. My hope is to apply this open mindedness to science and in this way be better equipped to take in the universe in all its vastness and mystery.