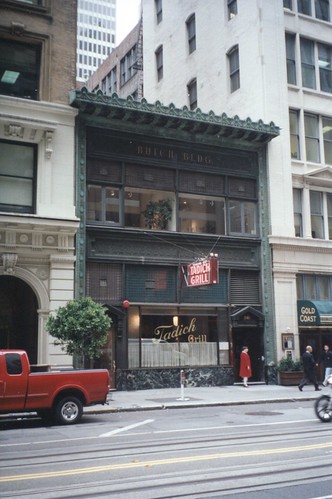 The Tadich Grill is a seafood restaurant located in the Financial District neighborhood of San Francisco, California, United States. It is the oldest continuously running restaurant in San Francisco,[having opened in 1849 as a coffee stand. In the 1920s, the Tadich Grill claimed to be the first American restaurant to grill seafood over mesquite charcoal, a traditional Croat method.
The original restaurant opened in 1849 as a coffee stand on Clay Street in San Francisco] In 1887, John Tadich from Stari Grad (island of Hvar, Croatia)purchased and renamed the restaurant after his surname. In 1928 the Buich family bought the restaurant from Tadich; they continue to own the restaurant today. In 1967 the restaurant moved to its present location at 240 California Street; this was after Wells Fargo bought the Clay Street location for redevelopment. The current space is one-third larger than the original, and the Buiches worked with contractors to recreate the Art Deco interior design that the Clay Street space had. All of the moldings and woodwork were copied, and the original Clay Street bar was moved to the present location. The restaurant reopened within one month of moving.

In 1925, Louis Buich advised that the chefs use a mesquite broiler for cooking fish. A native of Croatia, Buich was familiar with the technique, as it was a traditional Croatian style. The Tadich’s use of grilling became popular, and in a single day the restaurant can go through four 40-pound bags of mesquite charcoal. Little has changed in regards to the restaurant’s cooking techniques, and the restaurant has only had seven chefs since 1925 (as of 2011).