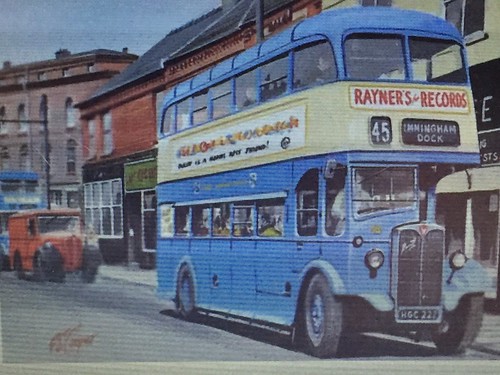 This is a screen-grab from the blog of Grimsby-based Rod Collins (www.rodcollins.com), who posts old photos of my one-time home town. Even though I moved away back in 1963, I enjoy reminders of the place that helped forge my worldview.

Here, Rod posted a scene painted by transport artist G.S. Cooper, asking “Who remembers Rayner’s record shop?”, as advertised on the front of the bus. Plenty of us do, but more than that, a host of us omnibologists (aka superannuated bus spotters) came out of the woodwork to post chapter and verse on the bus depicted, plus comments on a couple of inaccuracies and anachronisms in the scene.

In brief, we see former London Transport AEC Regent II STL2689 (HGC222) in Old Market Place, Grimsby, on the 45 service (joint with Lincolnshire Road Car Co.) to Immingham Docks. The route was introduced in early 1960, to replace British Railways’ Grimsby & Immingham Electric Railway service. The bus is erroneously given the Grimsby-Cleethorpes fleet number of 48. In reality, it was 43. Sister bus No.47 survives in preservation, restored to its original identity of STL2692, one of a batch of 20 that were painted green and based in Watford.

Grimsby took six such buses in 1955, enabling trolleybuses to be withdrawn from the 10 route between Riby Square and Weelsby Road (Peakes Lane). Other buses from the batch went to Widnes and Dundee.

The Dulux ad on the side of the bus suggests a date of 1965. Trolleybus poles are also evident, although the wiring was removed with the ending of trolleybus operation in June 1960. A Trojan van, once modelled by Dinky Toys, is just behind. At the far left is the Yarborough Hotel of 1863, then as now one of GY’s more salubrious watering holes, these days in the care of JD Wetherspoon.

Whilst I have been dismayed by the wholesale demolition of the Grimsby landmarks of my childhood, this scene can almost be replicated today. In place of the AEC Regent, there would be a Stagecoach East Midlands Dennis Dart or Trident, without doubt cast-offs from other parts of the corporate empire.

Artist G.S. Cooper may have taken liberties with the livery and all-round presentation of the bus: Grimsby’s salty North Sea air quickly dulled the lustre of the blue and cream.