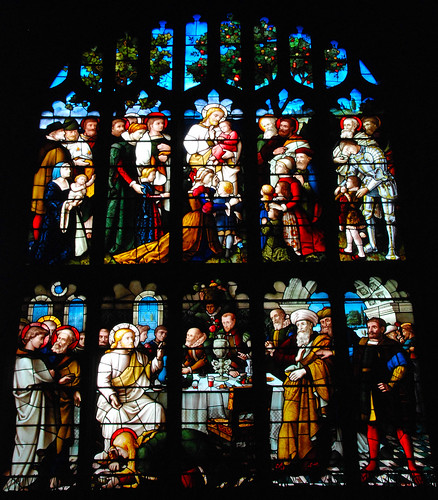 This church is high priority for revisiting, rephotographing and rewriting.

There is a tradition that St Peter and St Paul vies with Holy Trinity at Long Melford, just 5 miles away, to be the finest of all Suffolk churches. Well, they are certainly the grandest. This, of course, is not quite the same thing, and anyone who chose one of these two as their favourite Suffolk church would probably be either from the village concerned, or from out of county. I do believe that Suffolk’s two finest churches are 5 miles away from each other – but they are Blythburgh and Southwold, 30 miles away on the coast.

Suffolk has few more spectacular sights than St Peter and St Paul in its trim churchyard at the top of the hill, and Lavenham is a hilly place, set in hilly country. This was the heart of the cloth country, and villages all around produced the cloth that made the merchants of Lavenham wealthy, and in turn produced this magnificent 15th century building. If Holy Trinity at Long Melford was built with old money, this was built with new money.

Sheer perfection – from the outside, at least. St Peter and St Paul stands as a sentinel over the Suffolk cloth villages. A marvellous trick of making the church lift upwards is created by the larger windows at the east of the south aisle.

St Peter and St Paul, like St Mary at Stoke-by-Nayland, can be seen for miles around, its grand tower punctuating the skyline as a surprise as one travels the mid-Suffolk lanes. Rather more spectacularly, it rises proudly like a beacon as one approaches Lavenham on the road from Long Melford. It is more of a surprise, then, because we had found Holy Trinity Long Melford to be quite hidden.

St Peter and St Paul has the most urban setting of the great Suffolk cloth churches. This tames it slightly, and it is further tamed by being set in Suffolk’s main tourist town. If this church was set in a more remote place, it would have quite a different character. Nonetheless, it is a tremendous sight. As many churches are, it is well worth a walk around the outside before you go in. This a building at once solid and magnificent. It has a tremendous unity and integrity that Long Melford cannot match. The aisles, chapels, chancel and tower cluster around the nave, giving an impression of a fortified city.

The architect may very well have been John Wastell, who built Great St Mary in Cambridge, which is very similar. A marvellous trick of making the south aisle chapel windows larger than the south aisle windows encourages the feeling of a building that lifts upwards. This building is very late perpendicular. It was probably not complete until 1530, on the very eve of the Reformation.

The ancient font offsets what appear to be Victorian arcades. In fact, they’re genuine. That’s what you get for using the finest building materials.

As we step into the church itself, we have a quite different impression to that of Long Melford, or indeed any of the great Suffolk churches. This is a much more solid, darker building, the smell of wood-polish and coolness of stone being more prominent than any of the lightness and riches we might expect from the exterior. We will try to ignore the gift shop that spreads itself across the west end; I think the siting of this shop is disgraceful. So, join us as we turn towards the east. Looking upwards we are immediately struck by the sense of being in a Victorian building, because the precisely chiselled patterns of the arcade, the darkness of the wood and richness of the windows recall similar aspects of Victorian restorations. But this is an illusion.

The Lady chapel. Nice windows, shame about the glass. This was probably the Spring chantry. In fact, the quality of the materials used in the arcades is so high, that the carvings look as if they were done recently.
Bearing in mind that this church is half a century newer than Long Melford, Blythburgh, Eye or Southwold, it is still over 450 years old, and the condition is remarkable.

The dark woodwork, on closer inspection, is not heavy at all. It is the most beautiful light and bubbly screenwork, and formed parcloses to chantry chapels. One can only hope that the person who gave the order for it to be stained and polished lived to regret it.

The Springs were Lavenham’s richest family, and donors of this church. The parclose screen in the north aisle was to their chantry.

Another screen in the south aisle was possibly intended as a chantry chapel for the clothier Thomas Spourne, although his remains do not lie here. In the ferment of the 1530’s, it must already have been unclear if this church could ever be fully used for the purposes for which it was intended.

Not far from the church stands the Guildhall, completed in the 1530s and never used much at all for its original purpose before the Reformation swept the guilds and the chantries and the priests away. But for a few short years, the guild of St Mary maintained a chantry altar and priest here. The hall is a museum now.

And today, St Peter and St Paul is a splendid church. It has not been untouched; witness some of the most hideous, most truly awful 19th century stained glass windows in the otherwise lovely Lady chapel. The hand of the Victorians fell heavily here.

But this building is a document of the history of the Church of England, its completion coinciding almost exactly with the birth of that institution. It is a monument to Anglican triumphalism, and one can no more imagine Thomas Spring and his contemporaries saying their rosaries and attending Mass here than one can imagine the gift shop being banished or the floors and woodwork going unpolished. Anyone interested in the development of a civic church over the last 500 years needs to come to Lavenham.

Lavenham has several websites; perhaps the most useful starting points are the Lavenham Index and Welcome to Lavenham. Courtesy of the second of these, you can download here a zip file of two minutes of Lavenham bells. The site also has other audio files.

Also, visit the entry for St Peter and St Paul at Dave Postle’s Images of Churches and Buildings in Suffolk site.

St Peter and St Paul, Lavenham, is to be found on the A1141 Hadleigh to Bury St Edmunds road. The church is at the top end of the town, towards Long Melford. 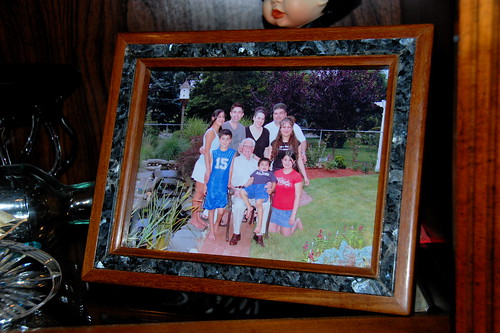