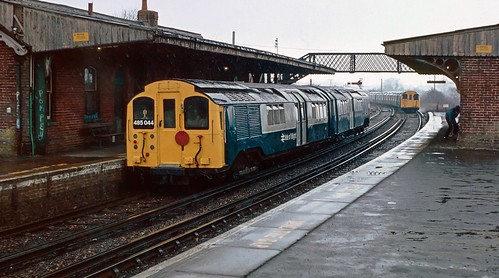 4-Car 4-VEC unit 485 044 reduced to a 2-car set (S10+S21) is seen waiting at Brading with the 12.11 Shanklin to Ryde Pier Head while 3-TIS unit strengthened to a 5-car set 486 036 (S7+S49+S44+S33) runs in with spray from the conductor rail while working the 12.07 Ryde Pier Head to Shankiln.
In 1985 the Isle of Wight was something of a railway backwater using ancient 1920’s London Underground tube stock with most stations in a run down state as seen here with bare woodwork. With EMU vehicles cobbled together to make serviceable sets the unit numbers were somewhat superfluous and couldn’t be relied upon to be accurate as seen here with both sets miss formed.