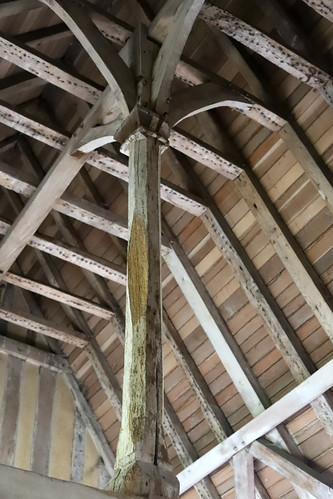 I am into my 12th year of the Kent church project, and I can’t remember how many times I have been to Fairfield. But its been a while since I was last here.

We were taking a friend out for his first trip out onto the Marsh, and so this was our first stop.

Storm Dennis was making itself known, but little rain as yet, so I went to get the key while Jools and Will walked to the church.

It is a small church, and I have photographed it much, so not much to do today, just some details and enjoy the atmosphere.

Fairfield isn’t what it seems. What you see now is a reconstruction dating from 1912, and the original building referenced by Hasted below seems to suggest the church wasn’t that old at the turn of the 18th century.

But does it matter? Not really, the location and the way it was rebuilt are stunning, and that really is all that matters.

The most memorable of churches, it stands completely isolated, with neither a tombstone nor a tree to keep it company. It was reconstructed in 1912 which detracts somewhat from its antiquarian interest, but this interferes very little with the visual appearance of the interior which is vaguely reminiscent of a farmhouse kitchen! The walls are of bare woodwork and the little square windows allow plenty of light to bathe the white painted box pews and matching three-decker pulpit. The low beam which runs in place of a chancel arch adds much character to the building. As a whole the church probably dates from the medieval period, but it would be impossible to put a date to it in view of the rebuildings.

FAIRFIELD
LIES the next parish westward, in the level of Walland Marsh, and in the jurisdiction of the justices of the county.

The PARISH, far different from what its name seems to imply, is a most forlorn and dreary place, and is seemingly the sink of the whole Marsh. It consists of an open level of marsh-land, unsheltered and without a hedge or tre throughout it. It lies very low, the eastern part especially, which, for the space of several hundred acres, is overflowed in winter, and becomes one great sheet of water, and the rest of the year is a swamp, covered with flags and rushes, which is in great measure owing to the mismanagement of the sewers, and though the landholders have lately been put to a very considerable expence, for the drainage of this level, they have not yet, nor in all likelihood ever will, reap any kind of advantage from it. The church stands on a little rise in this part of it, and is so surrounded by those swamps, that for the greatest part of the year it is to be approached only in a boat, or on a horse, passing with great danger through them up to the saddle girts. The western part, in which is the court-lodge, lies rather higher, and the land is much more fertile and dry.

William Sellyng, a man of great reputation for his wisdom and learning, who was elected prior of Christchurch anno 13 Edward IV. and died anno 10 king Henry VII. is said by his wife management, though not without great expence, to have prevailed on all persons, having lands at Apuldre and Fayrefeld, within the danger of the sea, to contribute towards the maintaining of the banks and fences to keep it out, for before the burthen lay altogether on the church, and was become an intolerable expence to it.

The MANOR OF FAIRFIELD, written in antient records Feyrsfelde, was, together with the church, as early as king Henry III.’s reign, for I find no particular mention of the time when it was given, part of the possessions of the priory of Christ-church, in Canterbury, during which time, in king Henry the VIIth.’s reign, prior Thomas Goldstone erected a new courtlodge, being a convenient mansion, on it, (fn. 1) in which state it continued till the dissolution of the priory, in the 31st year of king Henry VIII. (fn. 2) when it came into the king’s hands, where it did not remain long, for the king settled it by his dotation charter, in his 33d year, on his new-erected dean and chapter of Canterbury, part of whose possessions it still remains.

The demesne lands of this manor, being of the rack rent of about 1000l. per annum, have been from time to time demised by the dean and chapter on leases for three lives, the right hon. Geo. Augustus, earl of Guildford having the present interest in the lease vested in him.

A court baron is held yearly by the dean and chapter for this manor.

There are no parochial charities. The poor constantly maintained are about ten, casually seven.

THIS PARISH is within the ECCLESIASTICAL JURISDICTION of the diocese of Canterbury, and deanry of Limne.

The church, which is dedicated to St. Thomas, (Becket) the martyr, is very small, and built of brick. It consists of one isle and one chancel, having a low pointed wooden turret at the west end, in which hangs one bell. The church seems to be but of very modern date. There is only one memorial in it, at the west end of the isle, for Mr. John Beale, of Fairfield, obt. 1775. It appears by the several burials in it, mentioned in the wills in the Prerogative-office, Canterbury, to have been formerly much larger, and to have had a ring of bells in it.

The church of Fairfield, which is exempt from the jurisdiction of the archdeacon, has always been an appendage to the manor. It was appropriated by archbishop Edmund, in the 23d year of Henry III. anno 1238, to the almonry of the priory of Christchurch, and on the dissolution of it was granted, with the manor, by king Henry VIII. to the dean and chapter of Canterbury, who are the present possessors of the appropriation, as well as the patronage of this church.

¶The church is now esteemed as a perpetual curacy, and is of the yearly certified value of fifty pounds, which sum is, by covenant in the lease from the dean and chapter of the demesne lands of the manor, paid by the lessee, who has likewise by it the nomination to the curacy. In 1588 here were thirty-eight communicants.