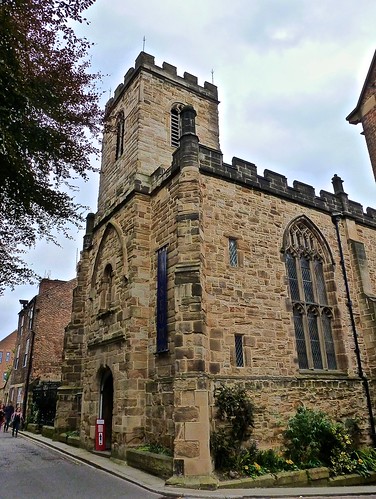 The museum is situated in an historic Grade I Listed Building, close to the Cathedral, once the parish church of the North Bailey. It was rebuilt in the 17th Century and retains impressive woodwork from that period. The churchyard is now the museum garden and contains two important sculptures by renowned local artist Fenwick Lawson.

Because Durham was originally a monastic Cathedral, the city itself was divided up into parishes, with parish churches serving the residents of the city.

St Mary-le-Bow was one.

Most of the current church building dates from the 1670s, and was built to replace an older church located on the site, which collapsed, along with a city gateway that stood adjacent to it, in 1637.

The tower is slightly later, dating from 1702.

Because the current Church is a reconstruction of an older building, it combines elements of different dates. The roof, for example, dates from the 15th century. The wooden screen before the altar dates from 1707, while the wooden panelling dates between 1731 and 1742. There are two baptismal fonts, one dating from the 18th and the other from the 19th century.

It is common for community buildings, such as churches, to go through periodic refurbishment campaigns, and receive gifts from time to time. This church is no exception.

Chancery court bench, dated to reign of James I, originated in Palace Green.