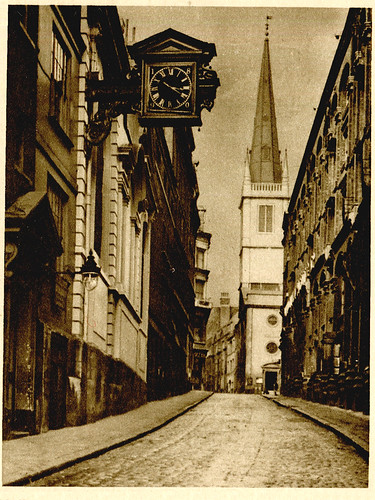 St Mary at Hill: The urban context first, for this church is set as many City churches must have been in the years before the Blitz. From the west, the tower stands in the slow curve of Lovat Lane, leading from Cheapside down to Eliot’s erstwhile fishmen of Billingsgate lounging at noon. It is easy to imagine the precocious Betjeman wandering down the lane as a schoolboy, summoned by the evensong bells to the twilit delights of the Book of Common Prayer. The east end of the church is flush in the street line of the road which takes its name from the church, and the name itself is writ large below the east window. A doorway under a portico with its skull and crossed bones leads through to the small burial ground.

St Mary at Hill was once one of the least spoiled of the City churches, and the only one to survive the Blitz with a full set of box pews intact. Worship here was a last taste of how the City churches were before the German bombs changed the City forever. And then in 1988 there was an arson attack which destroyed the ceiling. The furnishings mostly survived, and were placed in store while the roof and ceiling were restored. In 1998, Simon Bradley in the revised Pevsner lamented that most of the notable woodwork remains in store. Its full restoration is an urgent priority. Almost twenty years on this still has not happened, and you step into a great open space which feels much larger than it actually is. The missing furnishings were all of a piece, dating from Wren’s rebuilding of 1670-74, refurbished and added to in 1848 by W Gibbs Rogers who Pevsner complimented as his work could hardly be distinguished from the original. I have no idea why they have not been returned. Does someone know? Perhaps they will contact me and tell me.

The west screen is still in situ, there are some good glass roundels which remember the other churches which once stood in the modern parish, and the great chandelier has no distractions from its glory. But otherwise this is an empty shell, the skeleton of a church waiting for its flesh, blood and soul to be restored to it.

St Margaret Pattens: I have a fondness for this little church, which sits pleasingly on the north side of Great Tower Street. The paved area in front gives it rather a provincial air, as if we were in the main shopping street of Norwich or York, and the building itself similarly has no airs and graces. Here, where London bends towards the grim old tower, Wren turned disciplinarian and built one of the simplest, starkest patterns of his career opined Wayland Young in an uncharacteristically purple passage. Yes, it is plain, and the interior is plain too, a simple box-like nave with a north aisle beyond. Plain glass, plain benches, a plain wooded sanctuary – even the reredos is understated. And yet there is a pleasing harmony here. I thought the church well-chosen by the tramp snoring away on one of the back benches – there were no discordant excitements here to keep him awake!

But there is plenty to interest, too. At the back are the churchwardens pews for St Margaret Pattens and St Gabriel Fenchurch, and these are the only surviving examples in the City. The beadle’s pew survives too, and there are hat pegs for gentlemen, and perhaps all in all no other City church still has the calm and simplicity of 18th Century London life before the Victorian storm began. Mind you, those 18th Century gentlemen might have raised an eyebrow at the succession of young women carrying large exercise balls up the north aisle on their way to a pilates class in the north gallery, now a conference room.

A patten is a kind of wooden shoe, and a window of 2000 commemorates the Worshipful Company of Pattenmakers. But in fact the dedication was probably not a reference to pattenmakers at all, but to Ranulf Peyton, a Canon of St Pauls who owned the land in this parish.