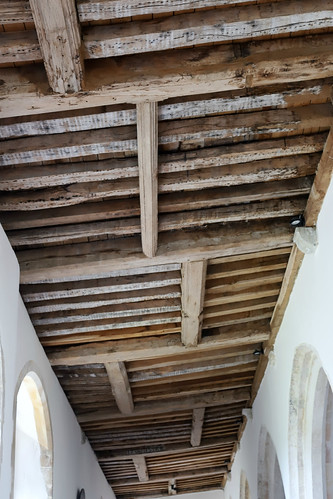 On the Marsh, all roads seem to lead to Ivychurch.

Ivychurch is the self-proclaimed "cathedral of the Marsh", and it is well claimed, for St George is large.

So large, the Lady Chapel is a museum, with a mix of agricultural items and other ephemera to interest the casual visitor.

This is my third time here, the last was with my friends, Simon, and I thought I recored it well, but looking int he album, 29 shots for tow visits is a pretty poor showing.

We were met inside the church, where we were asked to give our names for track and trace, and offered hand sanitiser.

The west tower window has just been renovated, but silly me didn’t get a shot of it.

Otherwise, it is a large and airy church, filled with light, with the occasional plough.

Some wall painting remains, which I failed to notice last time.

A large church with little in the way of individual interest, but nevertheless with a great atmosphere. It consists of a fourteenth-century aisled nave with eastern chapels and a substantial west tower. Excellent rustic woodwork includes queenpost roofs, medieval parclose screens to the chapels and chancel stalls in collegiate style. The Creed and Commandments hang to either side of the crude east window. The east window of the north aisle is altogether finer, but has been infilled leaving the outline of the tracery visible. Over the south door is a good Royal Arms of George III in a deeply patterned frame. The north aisle is empty, and displays its uneven, unrestored, floor of tile and brick. At the west end of the church is a tremendously powerful tower screen (inscribed 1686 I.G.R.B.C.W) with eight little classical arches either side of a central door, and the church contains a ‘Hudd’ to protect the minister from the weather whilst conducting funerals.

IVECHURCH
LIES the next parish south-westward from Snave. It is written in antient deeds Eveychurch, taking its name from its watry situation. The eastern part is in the hundred of St. Martin, and level of Romney Marsh, and within the liberty and jurisdiction of the justices of it. So much of it as is upon the Rheewall, which crosses it, is in the liberty of the town and port of New Romney and of the cinque ports, and separates that part of the hundred above-mentioned from the remainder, being the western part of it, lying in Walland Marsh, which, together with a small part of it in the hundred of Aloesbridge, is within the jurisdiction of the justices of the county.

This PARISH is in appearance much like the adjoining ones in the Marsh. It is about eight miles long from east to west, extending over the Rhee wall across Walland Marsh to the boundary of this county at Kent Dyke, but it is very narrow, at some places not half a mile, and at others not more than a mile and an half across it. The church stands at the east end of it, in the level of Romney Marsh. The village is near it, consisting of about twenty houses. The whole parish is an entire flat of marshes, without a tree or hedge among them. The lands are not much more fertile than those of the parishes last-described, excepting that part in Walland Marsh, where, like more fertile than those of the parishes last-described, most of the rest of it, they are very rich in soil.

The MANOR of Aldington claims over the greatest part of this parish, but a small part is within the manor of Ickham, near Canterbury. Subordinate to the former of these manors is that of.

MORE COURT, called likewife the manor of Court at More, which name it took from the family of More, the antient possessors of it, lying in that part of this parish within the level of Walland Marsh, at no great distance westward from the Rhee-wall. This family of More, or De la More, as they were at first written, had been seated here as early as king Henry II.’s reign. At length in king Edward III.’s reign, on the marriage of Thomas de la More with a daughter and heir of Benenden, they removed to Benenden, having by that alliance become possessed of lands in that and several of the adjoining parishes. At length his descendant Walter Moore, of Moore court, in Benenden, at the latter end of king Henry VII.’s reign, alienated this manor to John Taylor, gent. of Shadoxhurst, whose two grandsons, William and John Taylor, gent. becoming jointly entitled to it about the 2d year of king Edward VI. (as appears by an exemplification formerly in the hands of the family) immediately afterwards passed it away to Peter Godfrey, gent. of Lid, who died possessed of it in the 9th year of queen Elizabeth, anno 1566, and was succeeded in it by his son Thomas Godsrey, esq. of Lid, (fn. 1) in whose descendants it continued down to Mr. Chamberlaine Godfrey, who died possessed of it in 1766 unmarried, and was buried at Wye, upon which this estate passed by his will to Mr. Joseph Pinsold, who died possessed of it at the latter end of the year 1787, leaving the inheritance of it to his son Mr. Charles Pinsold, who is now entitled to it.

CAPELLS-COURT is an estate in this parish, which took its name from a family of that surname, fre quently written in antient time, At Capell, and in Latin, de Capella, who originally resided at it, though they were possessed of lands likewise elsewhere, in disferent parts of this county. John de Capell, who lived in king Henry II.’s reign, appears by the leiger book of Boxley abbey, to have been a good benefa ctor to it. His descendant Richard at Capell, son of Sir William, died possessed of this estate of Capells-court in the 15th year of king Richared II. S. p. Not long after which it went, by a female heir, into the family of Herlackenden, of Woodchurch, in which it remained till Deborah, daughter and heir of Martin Herlackenden, carried it in marriage to Sir Edward Hales, knight and baronet, with much other inheritance, and in his descendants it continued down to Sir Edward Hales, bart. of St. Stephen’s; but it now belongs to the heirs of Mr. John Bexhill.

CHENE COURT, now usually called Cheyn-court, is a manor in the western part of this parish, in the level of Walland Marsh, which though now divided into separate estates, and in the hands of different owners, was once, the whole of it, parcel of the antient possessions of the see of Canterbury, and remained so till archbishop Cranmer, in the 31st year of king Henry VIII. exchanged it with the king for other premises, (fn. 2) and it continued in the crown till king Edward VI. in his 7th year, granted it to Sir Thomas Cheney, treasurer of his houshold, whose son and heir Henry, afterwards created Lord Cheney, of Todington, alienated it to Richard Springham, William Bird and Thomas Aldersey, who joined in the sale of the manor itself, which from that time acquired the name of Old Chene-court, to Roberts, of Glassenbury, in which name it staid some time, and till at length it was alienated to Russell, whose only daughter and heir Mary carried it in marriage to John Knowler, esq. recorder of Canterbury, who died possessed of it in 1763, leaving two daughters his coheirs, of whom Anne, the eldest, married Henry Penton, esq. of Winchester, and Mary, the youngest, Henry, lord Digby, and they, in right of their wives, became entitled to it, which they joined in the sale of in 1793, to Mr. Thomas Gascoyne, of Bapchild, who alienated it in 1796, to Mr. William Baldock, of Canterbury, who passed it away the same year to William Deedes, esq. of Hythe, the present owner of it.

But the DEMESNE LANDS of the manor, since known by the name of New Cheney-court, were alienated anno 9 Elizabeth, by Springham, Bird and Aldersey, to Richard Knatchbull, esq. of Mersham, who died possessed of them in 1590, without surviving issue, so that Sir Norton Knatchbull, his half-brother, became his heir, who likewise left no issue, so that this, among the rest of his estates, came to his nephew and heir Norton, eldest son of his next brother Thomas, who was afterswards knighted, and created a baronet, in whose descendants, baronets, seated at Mersham, it has continued down to Sir Edward Knatchbull, bart. of Mersham Hatch, the present owner of this estate.

But a part of the DEMESNE LANDS of this manor, parcel of New Cheyney-court above-mentioned, were given by Sir Thomas Knatchbull, at his death in 1711, to Catherine his daughter, who married Sir George Rooke, vice admiral of England, and afterwards gained the name of Little Cheney-court. He died possessed of this estate in 1708, and she afterwards re-marrying the hon. Dr. Henry Moore, entitled him to it. Since which it became by purchase from Beale, the property of Thomas Blackmore, esq. of Hertfordshire, whose son of the same name is now entitled to it.

There are no parochial charities. The poor constantly relieved are about six, casually twenty.

IVECHURCH is within the ecclesiastical jurisdiction of the diocese of Canterbury, and deanry of Limne.

¶The church, which is exempt from the jurisdiction of the archdeacon, is dedicated to St. George. It is a large handsome building of sand stone, consisting of three isles and a chancel, none of which are ceiled, having at the west end a tower steeple with a beacon turret. In the tower there are five bells and a clock. There are no monuments or memorials in it, nor any remains of painted glass now lest in the windows of it. But in one of them, under the coat armour of Capell, Sable, a cbevron counter-embattled, argent, was formerly this legend, Orate, o aia Hen. atte Capela miltis— and another like coat, with the figure of a knight habited in armour, kneeling on a cushion, and this legend, Orate p aia Jacobi Capel miltis—but the whole of them has been long since destroyed.

This church was parcel of the antient possessions of the see of Canterbury, (fn. 3) and remains so at this time, his grace the archbishop being the present patron of it.

In the petition of the clergy, beneficed in Romney Marsh, in 1635, often mentioned before, and more particularly under Burmarsh, for setting aside the custom of two-pence an acre for tithe-wool and pasturage throughout the Marsh, an acquittance given by the rector of this parish in 1621, was produced as a proof of the custom of it here.

There is a modus of one shilling per acre on all the grass-lands in this parish, and there are several sums of money paid as antient compositions for lands in it, in particular for New Cheney-court, belonging to Sir Edward Knatchbull, bart.