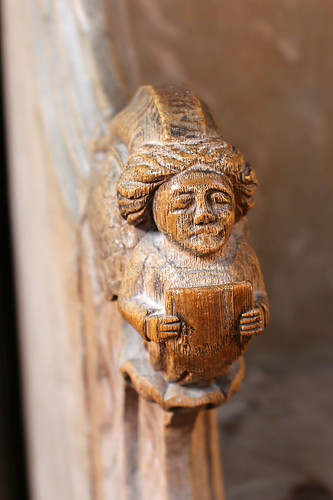 So, here it is, the reason I drove across Norfolk: Trunch in all it’s glory And it is glorious.

It has so many fascinating details, each one alone would be reason enough to visit, but together, in a fine village, next to the village pub, and with that font canopy, one of only four such in all of England, and one of two in the county.

The oldest building in Trunch is St. Botolph’s Church. It is mainly 14th. and 15th. Century but there are some fragments of stone in the walls which are believed to have been reused from an earlier Saxon church, which was recorded in the Domesday Book. There is much of interest in the church including a Rood Screen, a hammer beam roof and a rare Font Canopy.

The large village of Trunch is located about 5 miles from the north Norfolk coast. In the centre of the village, surrounded by a lovely collection of cottages and the more modern Crossroads Inn, is St Botolph’s church. Much of what you see of the church is early 15th century, built upon earlier foundations.
Upon entering the church the first feature you will see is the font, which dates to the mid 14th century. Though the font is attractive, it is the carved and painted font canopy that really makes a visit to Trunch worthwhile.

This is a quite remarkable piece of woodwork, one of only four such canopies surviving in the entire country (the others are at St Peter Mancroft in Norwich, Durham Cathedral, and Luton). The canopy is supported on six beautifully carved legs. The carving detail is exquisite; with fanciful animal figures and foliage and a bit of political commentary, in the shape of a pig wearing a bishop’s mitre.
In addition to the font canopy, Trunch features a superb 15th century hammer beam roof, a feature of many churches in Norfolk and Suffolk. Here the carvings of angels are beautifully performed. It is worth bringing along a pair of binoculars or a telescope in order to see the carvings properly.
Much easier to see are the medieval misericords (mercy seats) in the chancel. Each carving is unique; some represent angels, and others are more grotesque in nature. In addition there are some beautifully carved pew ends and a painted medieval rood screen that rivals many more famous churches in detail and colour.

There are 12 niches in the screen, each painted with a depiction of a single figure – 11 disciples plus St Paul. Much of the costume detail is well preserved, but the faces of the figures were destroyed during the upheavals of the Protestant Reformation in the 16th century.

William Earl Warren had the lordship of this town, (fn. 1) of which 3 freemen were deprived; one of them belonged to Herold, late King of England, another to Ralph Stalre, and the 3d to Ketel, who held 90 acres of land, and 14 borderers belonged to it, with 5 carucates among them; there was a church endowed with 10 acres, &c. 3 acres of meadow always valued at 30s. and there were also 5 freemen of Edric in King Edward’s time, who had 34 acres of land, with 2 carucates, 2 acres and an half of meadow, always valued at 7s. 4d. (fn. 2)

This town also belonged to the Earl Warren’s capital manor of Gimmingham, and paid suit and service to it. In the 34th of Henry III. Maud de Norwich granted by fine, to Richer, son of Nicholas, a messuage, 48 acres of land, a mill, and the sixth part of another in this town, Swathefeld and Bradfeld. In the 15th of Edward I. the Earl Warren claimed a weekly mercate, on Saturday, in this manor; and on the death of John Earl Warren, in the 21st of Edward III. the mercate was valued at 10s. per ann. the manor came after to the Earl of Lancaster, (as is before observed,) and so to John of Gaunt Duke of Lancaster, and King Henry IV. and is still in the Crown, as part of the dutchy of Lancaster.

The Church is dedicated to St. Botolph, and is a regular pile, with a nave, 2 isles, and a chancel covered with lead, and has a tower with 4 bells.

In the chancel, on a little monument,

In a window here, argent, a fess between two chevrons, sable.

¶The patronage of the church was granted to the priory of Castleacre, by William Earl Warren, the first on his founding that priory. In the reign of Edward I. the rector had a manse, and 13 acres of land valued at 16 marks, Peter-pence 13d. and the prior of Castleacre had a pension or portion of tithe valued at 40s. the present valor is 10l. 13s. 4d. and pays first fruits, &c. the Norwich registers say that William, the second Earl Warren, granted the patronage, and Eborard Bishop of Norwich, confirmed it; and that Simon the Bishop confirmed the pension in 1268.

Trunch is the largest of the villages between North Walsham and the sea; but as all the industrialisation and tawdry caravan sites are hard against the coast, and Trunch is several miles inland, it has avoided these excesses and retains a great rural charm. It has a magnificent church with lots of fascinating treasures, as well as a shop, a green, a pub run by an ex-professional footballer, and generally all the typical features you expect to find in a large village in deepest rural Norfolk.

The church is perhaps the most interesting of all round about; and, while the large village lends it an urban quality that lacks the charm of, say, the churches of neighbouring Edingthorpe and Crostwight, it has by no means the Victorianised sterility of those at Bacton or Happisburgh.

St Botolph is a big church, and its tight graveyard makes it rather hard to photograph. The whole piece seems to have been rebuilt in the early 15th century, although the chancel may be a little later, and there is a hint of Decorated about the nave. The tower is quite simple, even slight. It builds boldly enough, but at the top of the second stage fades into a simple bell stage, understated, elegant and probably intended. This is not a building that shouts at you. A curiosity is the massive priest porch surrounding the door in the chancel. These are very unusual, although there is another, smaller one at neighbouring Knapton.

The great treasure, of course, is the marvellous font canopy. It is particularly fascinating because of its date, coming in the early 16th century right on the eve of the English protestant reformation. Like all church furnishings at this time – the tombs at Oxborough, for instance – it gives us a hint of what the English renaissance might have been like if it had been allowed to flower. Here, the massive structure tumbles with intricacy; fruit and flowers, leopards and lions peep around the silvery oak of the six octagonal columns which are fluted with interlocking chains of detail. The glory is the massive crown of canopied niches, with the haunting ghosts of crucifixion groups still apparent on three of the faces. The whole thing is at once in perfect harmony with the west end of the church, but exists because it was believed to be beautiful rather than known to be useful.There is only one other font canopy in Norfolk, at St Peter Mancroft in Norwich; Outside of the county there is another at Durham Cathedral, and a fourth at the parish church in Luton – but that is it.

Above the canopy is a rich 15th century hammerbeam roof, by no means as dramatic as that at nearby Knapton, but more beautiful, I think. In the space beneath the tower there is what appears to be a gallery like the plough guild gallery at Cawston. This is not as elaborate, but its oak has silvered and it is painted beautifully with trailing rose foliage.

The benching, unfortunately, is pretty much all 19th century, but along with the font canopy and roof the medieval screen survives. Like the canopy, this is richly ornamented in relief, including a bold dedicatory inscription in diagonal ribbons across the top part of the dado. The twelve figures (11 disciples and St Paul) are boldly placed and coloured, but their faces have been completely vandalised by the 16th century reformers. Low down on the north side of the doorway is a rare surviving carved consecration cross, suggesting that this screen was already installed in the newly built church of the 15th century. The screen had detached buttressing running vertically at intervals in front of it, as at Ludham. They have been almost entirely destroyed, but you can still see the fixings between the panels. It must have been magnificent.

The return stalls in the chancel are pretty much all Victorian, but they retain medieval misericords, and also you can see quatrefoil holes set into a sounding chamber to amplify the singing. There is a very curious memorial above the priest door, featuring the instruments of the passion. I have no idea how old it is.

All of these features would be enough, but part of the attraction of St Botolph is the sense of harmony, the way everything works together. You can add to these the sedilia, the magnificent organ, and the modern design of the glass in the east window. It is a peaceful, inspiring space.

Cottages and houses hem in the graveyard, and in the corner is the modern pub. Incidentally, I don’t really know if the bloke who runs it is an ex-professional footballer. But, like many rural Norfolk landlords, he seems to be a cheerful 40-something cockney who serves a decent pint and cheap food – a recommended stop for churchcrawlers.

And the pub is still good.